A cold front and possible rain and snow in the higher elevations was supposed to be here Saturday night.  You know how the weather forcasters are, usually wrong.  It was getting pretty windy on Friday evening so we battened down the hatches.  By nine or ten it was raining and as far as we know it rained all night.  Saturday morning was in the low 30’s and it was windy.  The rain continued on and off all morning.
A good day for reading.  And baking a cake.  We did an 8×8 German Chocolate cake and six cup cakes.  We are getting pretty good at baking in the microwave/convection oven.  We have to watch time a bit, things get done quicker in the convection oven.  So first the cupcakes.  There were no time/temperture instructions for cup cakes especially at high altitude.  We guessed.  They came out fine.  Then the 8×8 cake.  The time the instructions gave was for an 8″ round.  So we added some time, tested the cake and added some more until it looked done.
We did get out for a walk in between rain spells.  I felt sorry for folks who had to leave in the rain if they weren’t packed up the night before.  The weather report said we got almost 1/2″ over night.  We walked over to the Visitor’s Center, down to the marina, back up to the gift shop for another look.  There were a couple of t-shirts that I liked and a fleece jacket.  It was cold so I got the fleece jacket.  Susan is holding out. Back for some more reading.  We baked two buttermilk biscuits and had them with chicken pot pie soup for supper.  Good on a cold night.  We walked down to the lake to catch the end of the day.  Another colorful sky. 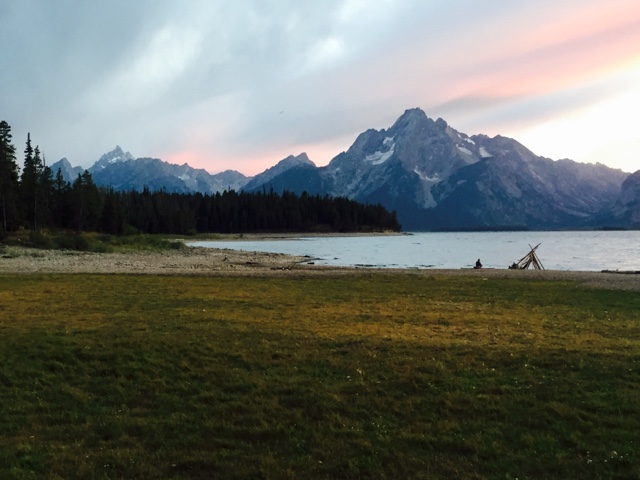 Sunday, September 5th.
Sunday came and the sun was out but it was cold.  A short morning walk down to the beach in our winter gear. It warms up quickly here. 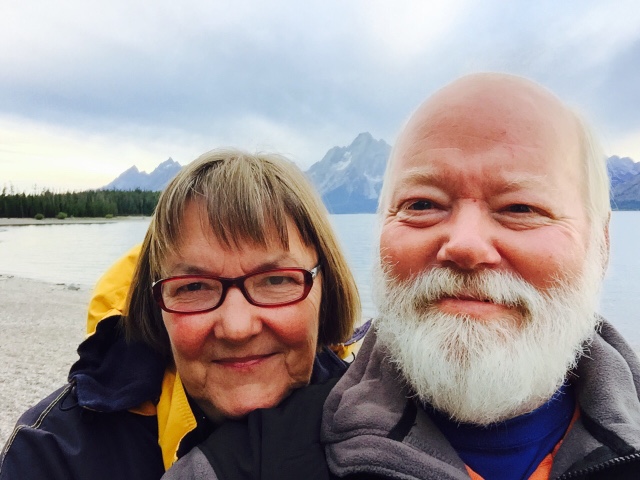 We were driving down to Jackson to meet some Foretravel Folks.  Dave Katsuki and Nancy Elkins are full timers, about our age who are working this summer as volunteers at the National Elk Refuge.  They each work 2-1/2 days each week.  They have had a full hook up site on the Refuge all summer looking out towards the Teton Range.  This work is with the National Forest Service which manages the Elk Refuge.  Dave does maintenance work on equipment.  Nancy is an interpretive guide at the Miller House.  Their schedules don’t often match so one or two days a week when neither is working is about the best they can do.
We ate at a place we saw on “Diners, Drive-Ins and Dives”, on the Food Channel called Cafe Genevieve.  Great breakfasts.  Susan had a salmon eggs bennedict.  I had a green chili huevos rancheros.  Very good. 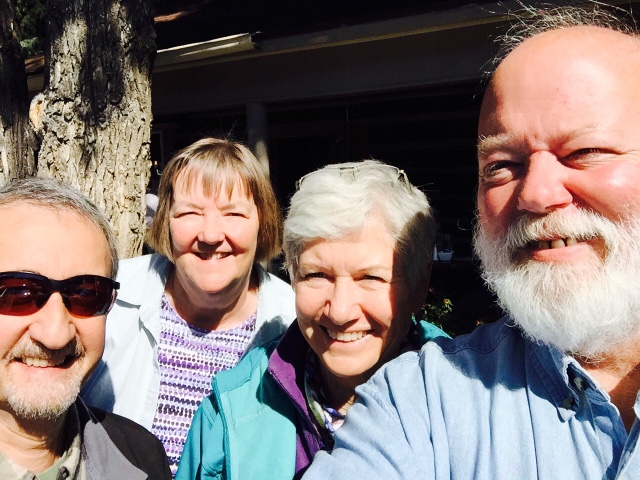 Dave and Nancy enjoyed their summer here.  They come here almost every summer and have worked or volunteered in a variety of jobs.  This year was their longest, 4-/12 months and while they enjoyed the work and being here they were ready to move on. Sometimes work of any sort gets in the way of fun. 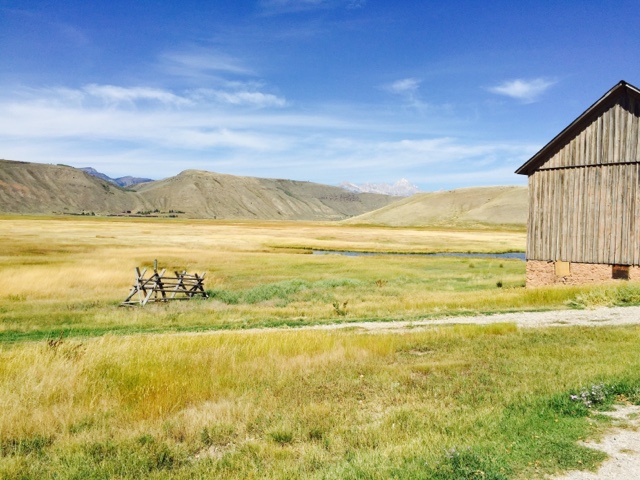 Nice spot for their summer stay.

We stopped by the Miller House out on the Elk Refuge.  It was built in the late 1800s by some guy named Robert Miller who had homesteaded 160 acres about 3 miles from where Jackson is today.  It had water.  He went back to Chicago to marry his wife and brought her to Wyoming.  They built a big 6 bedroom house here but never had any children. 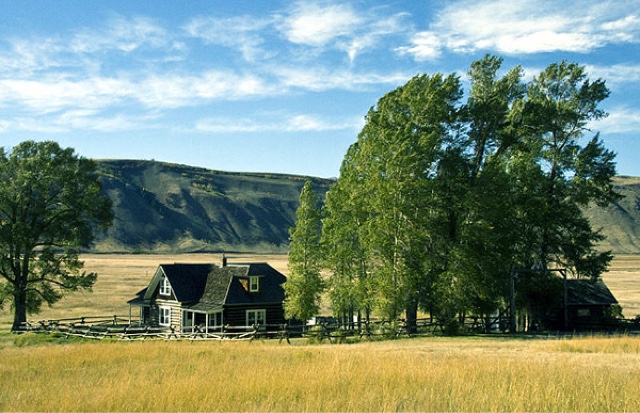 Farming here is next to impossible.  Only a few inches of soil sit on top of gravel and rocks.  They did well at ranching and kept buying more land.  They became realtively wealthy. MIller started a bank and a land title business. Both prospered.  Many of his neighbors and clients did not so their land holdings increased.  They moved into Jackson into a fancy home which is still there.  Mrs. Miller was elected Mayor of Jackson.  Miller worked for the Snake River Land Company (owned by John D Rockefeller, Jr) buying up as much land as possible.  The Rockefellers later donated more than 30,000 acres to the original Grand Teton National Monument.  Miller was the first Park Superintendent of the Grand Teton National Monument.
The National Elk Refuge was created in the early 1900s.  The natural elk migration route led right through Jackson.  In the 1800s the elk just move through town.  By the beginning of the 1900s the town was big enough that the migration was blocked.  The area north and east of Jackson didn’t have enough winter food for the thousands of elk coming out of the mountains and many elk were dying.  Another rancher named Steven Leek took photographs of the dead and dying elk.  Many ranchers in Jackson Hole petitioned the Federal Government for assistance and in 1912 the National Elk Refuge was established and many but not all homesteads and ranched were purchased for the refuge.
To keep the elk from starving the National Forest Service began feeding the elk in the winter.  This practice continues today but instead of hay they feed the elk alfalfa pellets about 3/4″ in diameter and 2″ long. Apparently it is more cost effective and nutritionally better than hay. 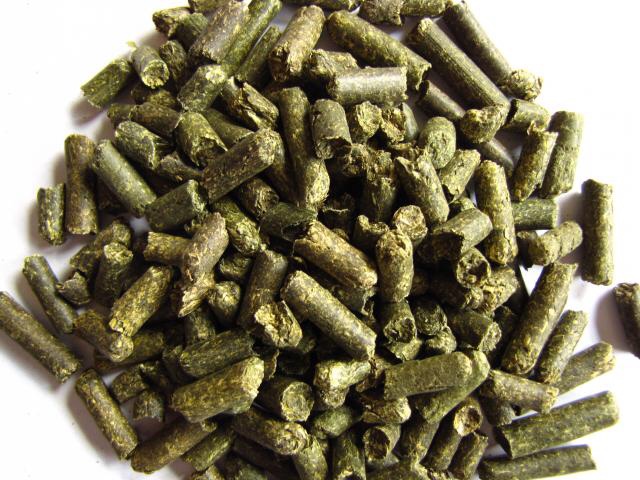 They wait until the elk have eaten as much natural grasses as they can.  When the grass runs out or the snow gets too deep then the feeding begins. They are experimenting with many efforts to increase the natural food supply.  Many hundreds of acres are being irrigated to significantly increase the growth of native grasses to decrease the dependence on feeding.  The herd size is being managed as well with an annual hunting season. In the 2014-2015 winter there were 7,500 elk in the Refuge. A recent newcomer to the refuge are bison.  Last winter 500 showed up. They seem to be able to forage better than the elk.
No elk pictures, they are not here in the summer but in the winter … 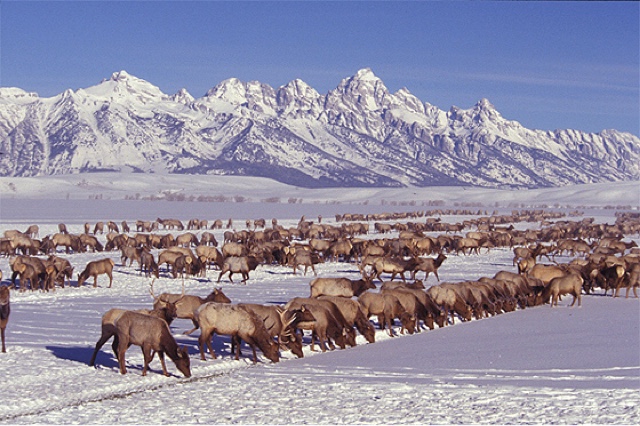 Obviously someone elses photo.
Tomorrow we are driving up into Yellowstone.
More later,
Roger and Susan