Our original idea was to stay in Yellowstone for two weeks with a day trip or two to Grand Teton National Park.

We started in March looking for places in Yellowstone. We were looking for places with room for our 36′ RV where we could make reservations. Electrical connections were not required but would be nice. There is an RV Park at Fishing Bridge, the only place with electric. During the time frames we were checking on plus or minus a week there was nothing available for two weeks, nothing for seven consecutive days even if we changed sites. There were a few openings but nothing more than four days in a row.
Campgrounds with bigger spaces and no hookups were next. Pretty much the same story.  The best second choice was Madison on the west side.  It had nothing.  I was surprised by this and asked a reservation person why space was so tight and they said that September was prime fishing season and was as busy as the peak summer times.
Many of the campgrounds close by September 15. Some campgrounds take reservations for some of their sites but not all.  The RV campgrounds are all reservation and usually full 6-9 months in advance.
Another option would have been West Yellowstone but spots there are $60-80 per night or more.  And you are outside of the park.  Not a good choice for us.
So we started checking at Grand Teton and found the space and time we wanted right away.  Lock it in. That turned our plan upside down.  Two weeks in the Tetons with day trips up to Yellowstone.  By sheer luck it was the best turn of events.
We have been to both parks before.  We remember getting up in the morning, packing up and driving to a different campground early to get in line for a first come first served spot.  For many that works fine.  It did for us then with our smaller camper.
So, I am going to combine our day trips up to Yellowstone into one blog. Two trips, about 160 miles each day, 9-10 hours each day. Plenty of time to stop and see, some short walks and picnic lunches.  We both did over 10,000 steps both days even with the drive time.
West Side Story
From Colter Bay it was only 17 miles to the south entrance to Yellowstone. And  up around the west side towards Old Faithful and all that is there and beyond that up to Madison. We drove all the way up to Madison first. You go past Lewis Lake and the Lewis River flowing south and then climb and cross two continental divides before you get to the Old Faithful area.
If you remember Yellowstone NP sits on one of the biggest volcanic hotspots in the world. Only a couple miles beneath the surface lies molten rock, magma which heats the ground water to make the geysers spout, the mud pots to bubble, and the vents to fume. Most of this is pretty stinky, smells like rotten eggs. The entire volcano has erupted at least three times in recent geological time.  The last was 640,000 years ago which created the caldera, 35 miles x 40 miles, that now forms the heart of Yellowstone. That eruption was more than 2,500 times the size of Mount St Helens which erupted in 1980, based on the amount of material blown out during the eruption. This ash and dirt and rocks and molten lava spread over more than half of North America. Smaller eruptions continue, the last only 3,400 years ago. Yellowstone is considered to be an inactive but not dormant super volcano.
After we crossed the continental divides we headed for Madison.
There are active geyser basins in most of the park. (British folk pronounce these as geezers) There were a lot of both in the park. 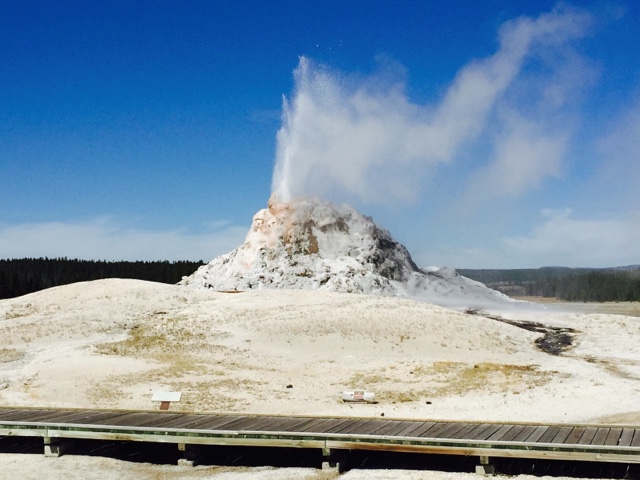 This type is called a cone geyser. The stuff blows up through a hole in a cone made by the minerals in the hot water. Eventually the hole gets smaller, the pressure higher and the hole cone will blow apart. 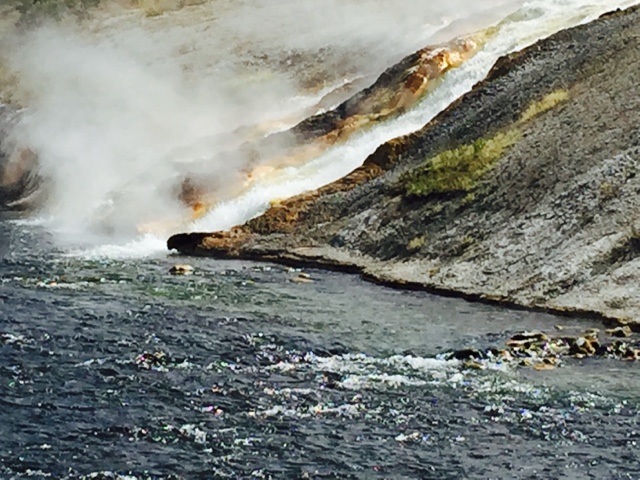 Very hot water full of minerals flows out of super hot springs and pools right into the cold fresh water of the Firehole River which flows north. 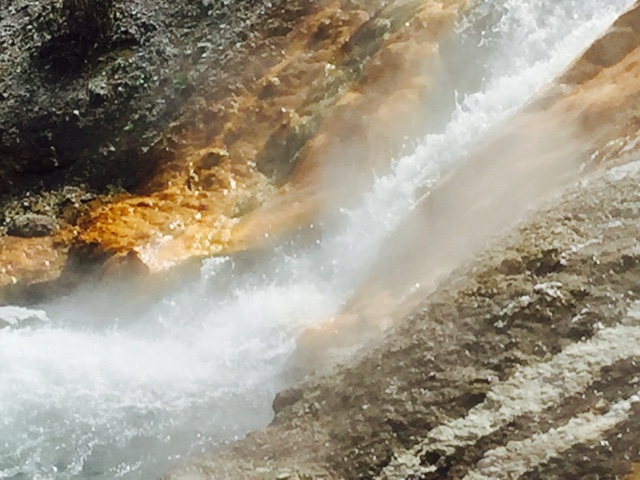 The minerals deposit some of the color but most of the colors come from bacteria and other micro-organisms that live in the hot organic soup. 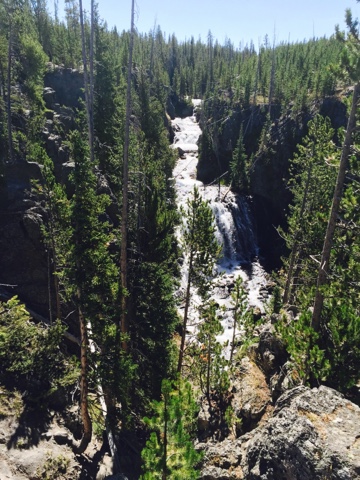 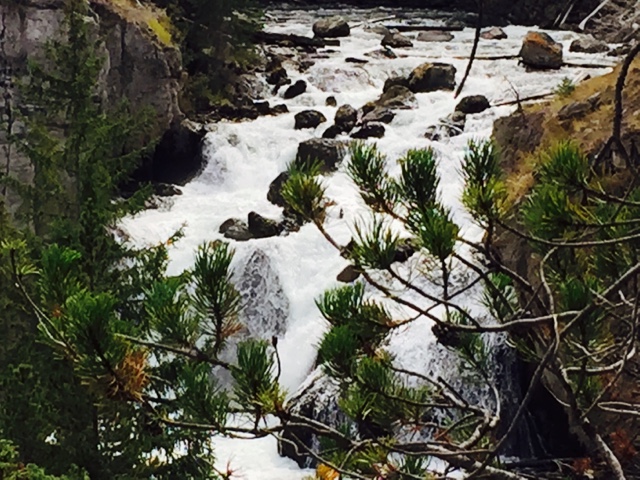 And through the Firehole Canyon where it merges with the Gibbon river coming from the east to make th Madison River which flows west and then north through Montana. 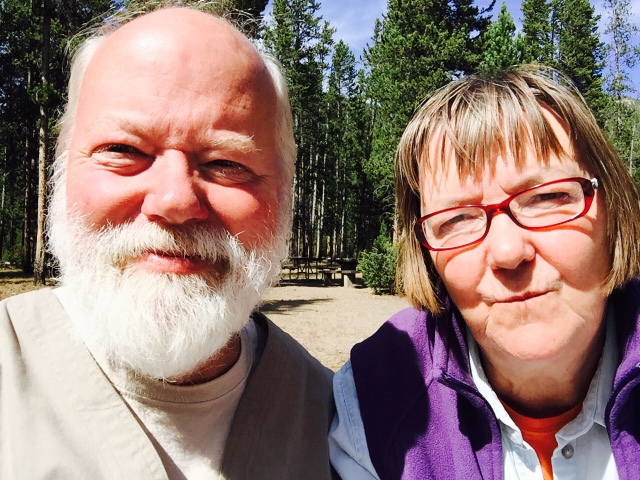 We stopped at Madison for a picnic, visited the Visitor’s Center and drove throgh the campground to see what it looked like. It was a nice campground with some shade and roomy sites. I can see why it is a popular campground, one we would like to stay at.  It is one of the first to open and one of the last to close.  Great fishing nearby.

And then back towards Old Faithful. It is almost like a theme park. Massive parking areas and many thousands of visitors. We went in to have a look at the Old Faithful Inn. We thought about staying overnight there but for the cost of a couple meals and a room we could stay for another week and a half in Colter Bay. 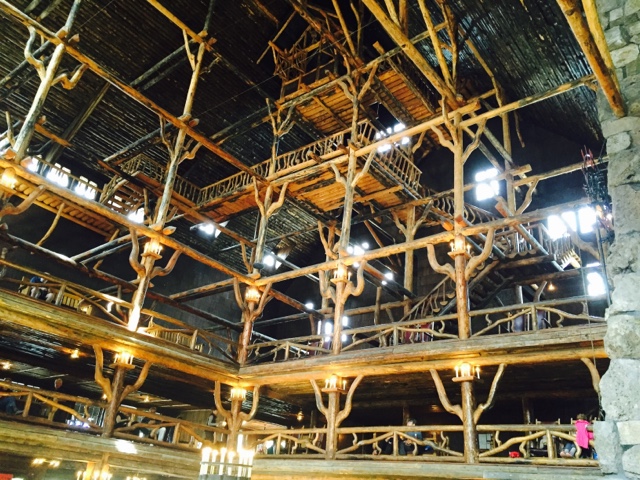 There is also the Old Faithful Lodge. A 1970s looking hotel sort of thing right in front of Old Faithful.  I wonder how many people make reservations at the Lodge thinking it is the Inn?
Old Faithful spews forth from its basin (this is basin geyser) about every 90 minutes or so.  There are big signs everywhere telling visitors when the next spewing will take place.  About 15 minutes before crowds form on the semi-circular walkway in front of Old Faithful. A ranger said that there is usually about 3,500 standing there waiting holding their cameras up waiting for the inevitable which is that their arms get tired.  Once the geyser begins to spout the photographic clicking (mechanical or electronic) nearly drowns out the sound of the the geyser.  The eruption lasts about 3-1/2 minutes on average so there is plenty of time to get those arms up and click away. Before the event is even half over the crowd is dispersing heading back to tour buses or to the parking lots. 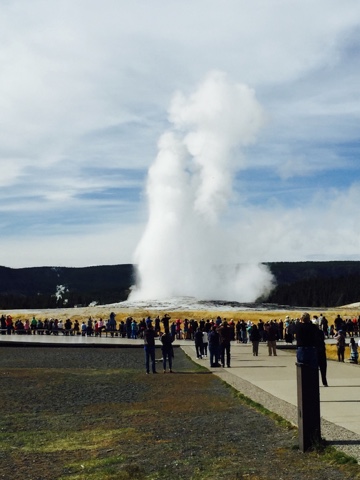 Pretty neat actually.
Lake Side and Canyon
Our other day started out the same heading north past the Lewis River and Lake Lewis and then east around Yellowstone Lake. 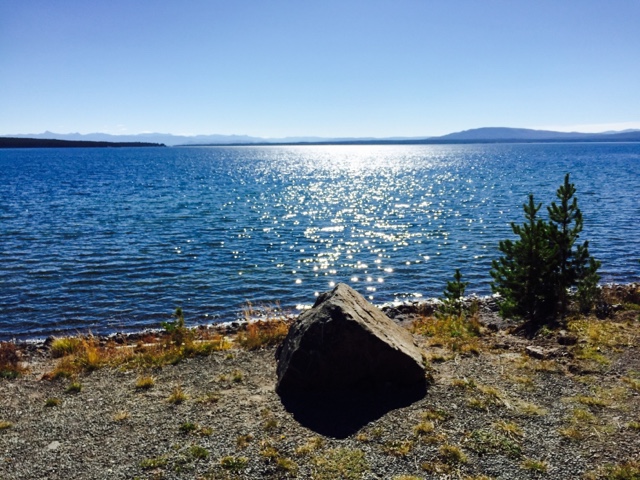 The lake is large, beautiful and has minimal access.

At the top of the lake are three major areas.
Bridge Bay has a very nice campground, a marina, lake access and a store. We have stayed here before and it is a nice place.  The campgound was already closed for the season.
Lake Village has accomodations, stores and lake access.
Fishing Bridge has a large campground as well as an RV campground.  We drove through the RV campground to check it out.  It is in the middle of a very busy area off the main road into the park from the east.  The RV park was disappointing when compared to Colter Bay.  The sites were closer together, not as many trees and it didn’t have the same feel as Colter Bay. But if we hadn’t seen other RV parks in other National Parks it would have been OK.  We have been in private RV parks that were worse.
Up at the Canyon Area lies the Grand Canyon of the Yellowstone River. 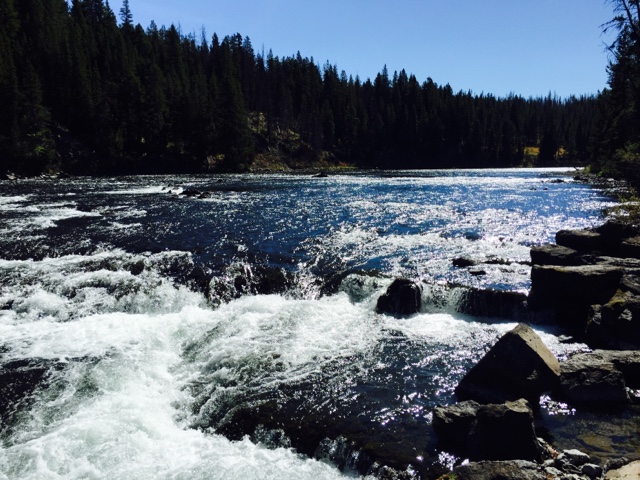 The Yellowstone River flows out of Yellowstone Lake heading north towards the Canyon Area.  As it flows it starts to cut into the rock. There are rapids before the upper falls and the lower falls.
The lower falls drop 308 ft. There are trails along the south rim and lots of ways to have a look.
We started down Uncle Tom’s Trail. This at some long distant life in the past was a rope and ladder trip down into the lower canyon to near the bottom of the lower falls where dinner was served. This was in 1898 – 1905. Imagine climbing down in your suit and tie or dress using ropes and ladders. 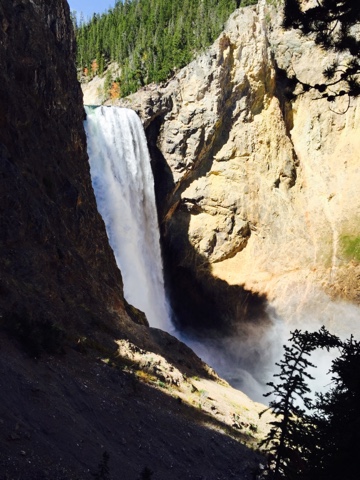 Today there is a system of steel stairways, bridges, ramps and paths that lead down 350 steps and more than 500 feet to look out at the falls from a prespective few see. Susan got down about half way before the sharp drop offs and open stairs were enough. I went on to the bottom. Caught my breath and then the cardio workout of the year began. 350 steps. On stairs just hanging out in space. 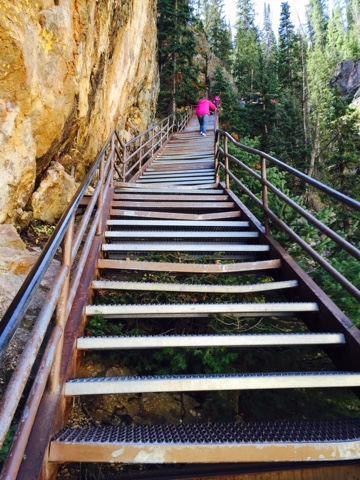 And then back up the canyon to the upper falls. Beautiful. 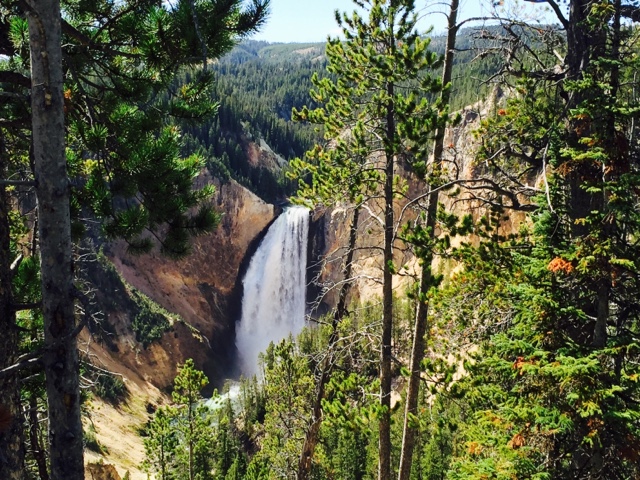 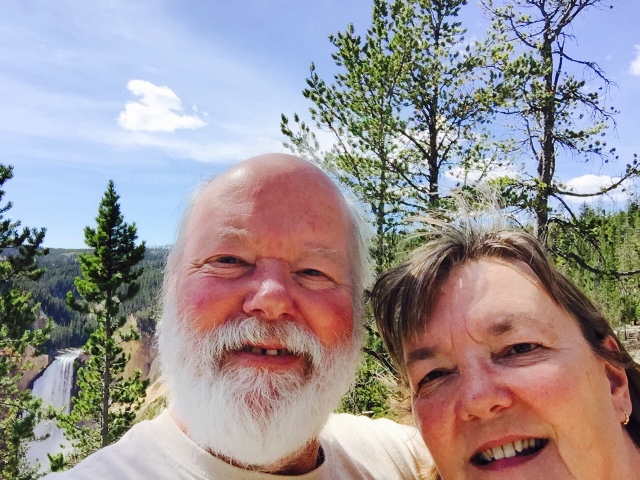 We need to get a selfie stick. Maybe not. 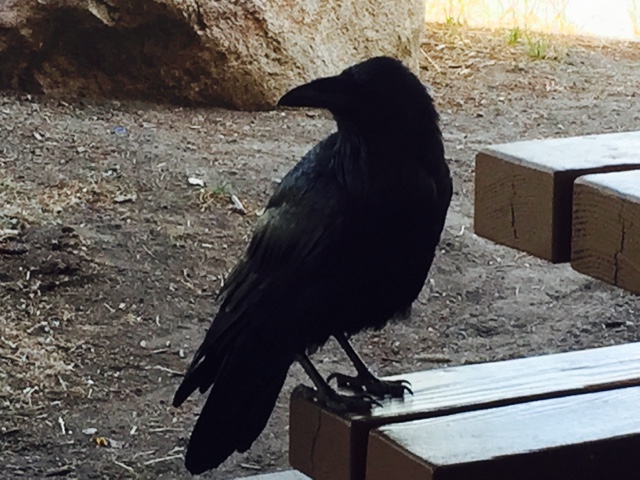 We stopped for an ice cream on the way back to Colter Bay. A raven kept us company at the table.  What a big, bold bird.  Absolutely confident around people.

That is a short summary of two full days, lots of hiking, lots of driving and almost three hundred pictures and about 10 hours of dash cam video.
Yellowstone is a beautiful place. We would like to come back, find those back trails where the rest of the visitors don’t go, fishing spots where you might be alone with the fish and a campground that was more than a parking lot. Yellowstone is the fourth most visited park in the nation. The Smokies and Yosemite have nearby population to feed them. The Grand Canyon is a once in a lifetime sort of thing for many.
We got back to Colter Bay. Calm, space, shade, quiet. The Grand Tetons are the second most revisited park in the nation.  If you drew a fifty mile radius circle around Colter Bay there would be only 15,000 people near by.  The first most revisited park is the Smokies.  In the same sized area there would be millions of people.  Something about the Tetons grabs and holds your attention and makes you want to come back.  We want to. We will.
More to come.
Roger and Susan