Another stunning day in the Tetons.  Mornings are usually bright and clear.  Some clouds push over the mountains from the west in the afternoon. 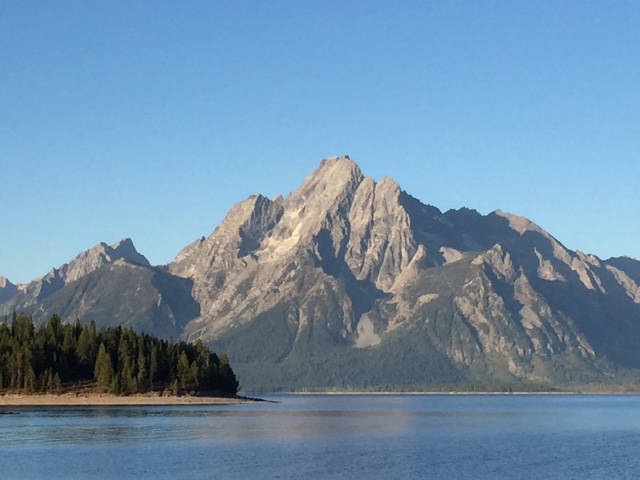 Haven’t caught the mountains yet in the morning when the lake is calm.  I got up pretty early one morning and it is interestimg how the mountains light up as the sun comes up.
We were headed down to Jackson on an errand so we wanted to try the Snake River Road on the west side of the Snake River marked on the map as something more than a trail but not a real road.  It said 4WD only. Perfect. These are the 5% places or 1% places that we look for.  (5% of park visitors go there). After driving this 20 mile long road that ranged from deep ruts to mud to gravel to softball sized boulders my guess is far less the 1%.
The road isn’t marked on the highway. No sign, no gate, no turn lane, just ruts.  So turn we did.

From the top of Signal Mountain you can see (sort of) the road coming in from the right along the tree line and then heading more southeast. (The little squiggly line). It is mostly sage brush out here.  The road follows the Snake River along the bluff. Down below the bluff there are trees, mostly cottonwoods. 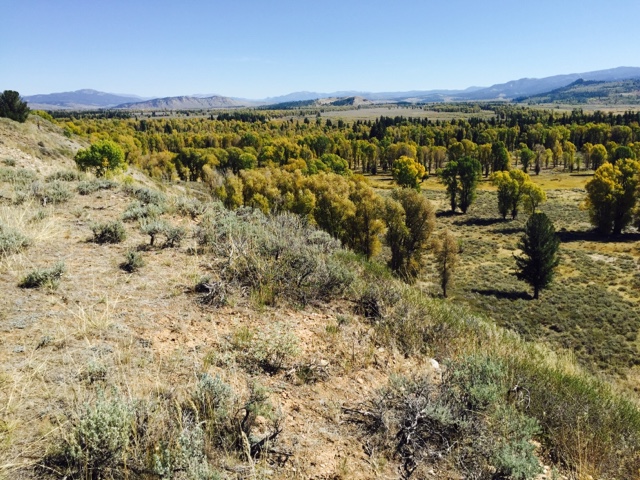 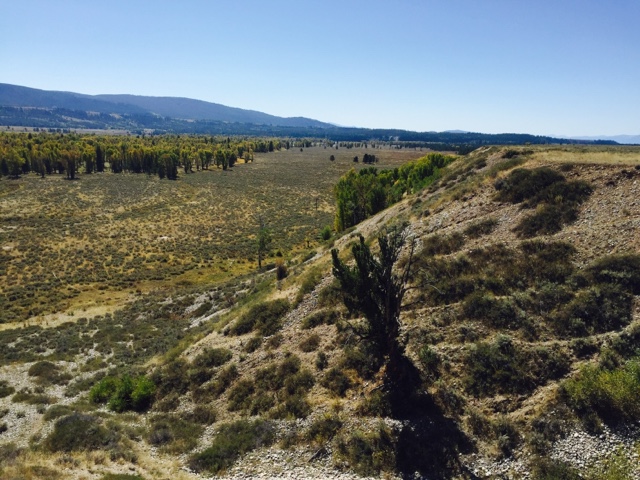 It is a couple hundred feet down to the next level.  The river is in another level below that. 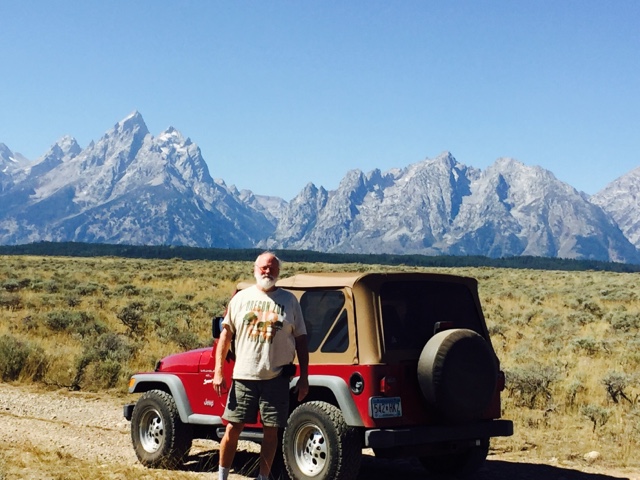 Our old Jeep and the older driver did well. Susan got nervous a couple times when we got close to the edge. 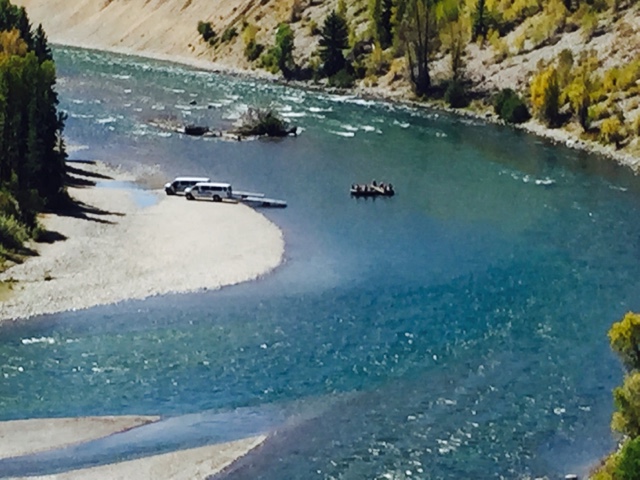 Dead Man’s Bar on the Snake River from above.  We could see the road from the other side to this access point.  Lots of raft trips begin here. 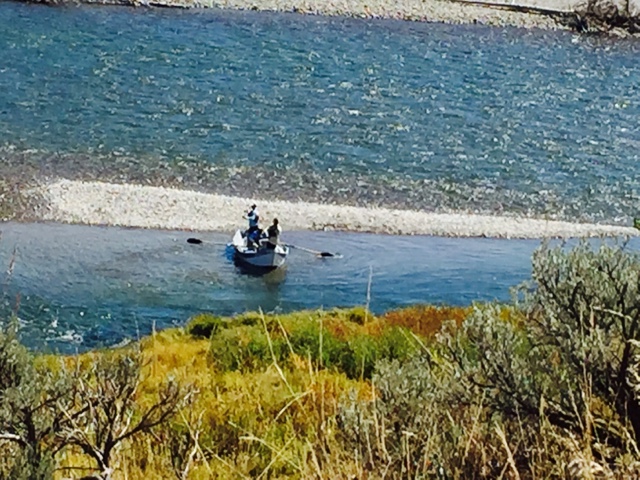 And tall tales of fishing.  There were many fishing people.  Many on shore, some wading in. Many in these boats that look like New England dories. 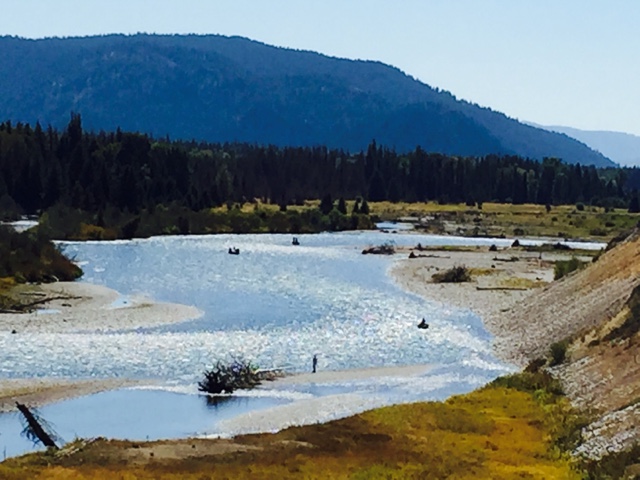 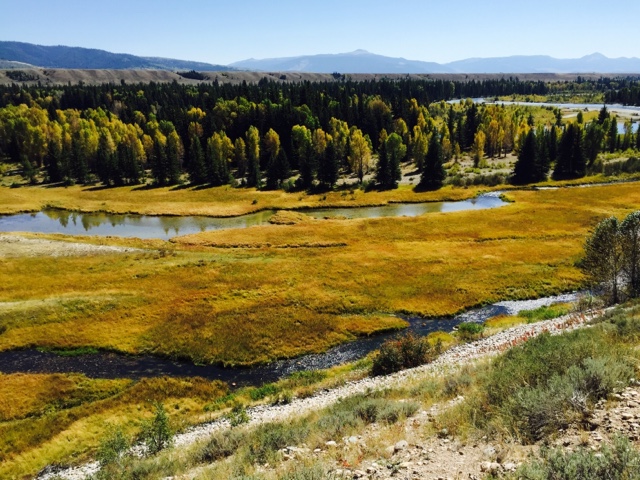 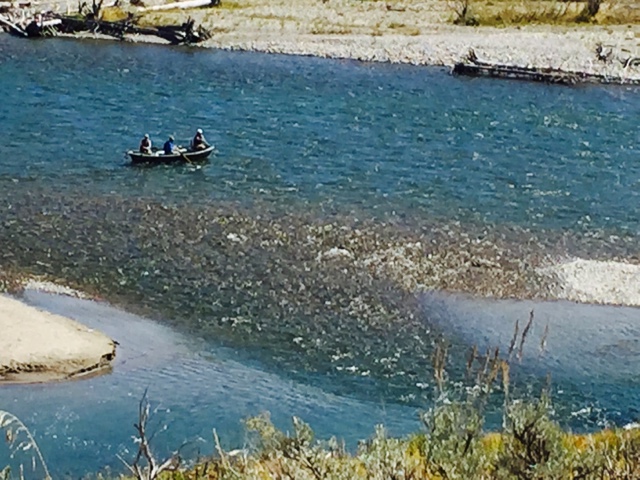 We made it all the way through the road.  From the high bank the road dropped down to a lower level, still two steps above the river.  There were signs of animals all over and animal trails too.  We did see a small herd of antelope. And then there was a steep rugged climb back up to the upper level. And then finally  a long downhill run and back towards the highway.  We saw maybe 5 or 6 other 4WDs on this drive, no cars.  We did see one Ford van all set up with 4WD and lots of bolt on stuff.
We did our errand in Jackson and headed back towards Colter Bay on the east side of the Snake looking for the Dead Man’s Bar access.  It is on the map. It had signs and a turn lane.  So off we went. 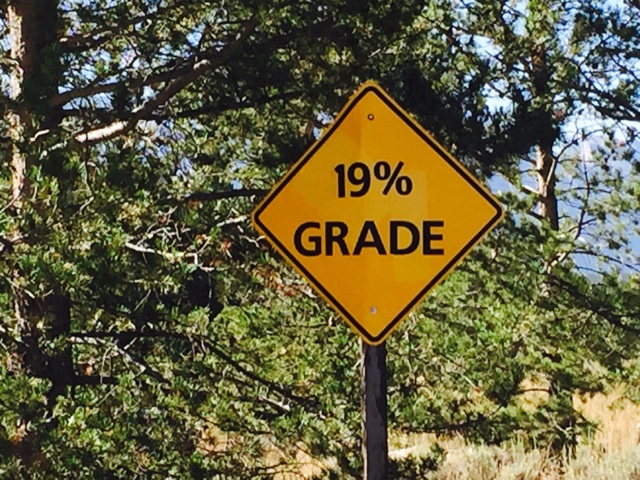 Remember I said it was at least a couple hundred feet down to the next level?  Three or four hundred feet on this side.  This sign probably turned many around.  A steep winding road leading down.  We got down there and soon after a 40 passenger school bus did to.  So much for bravado. 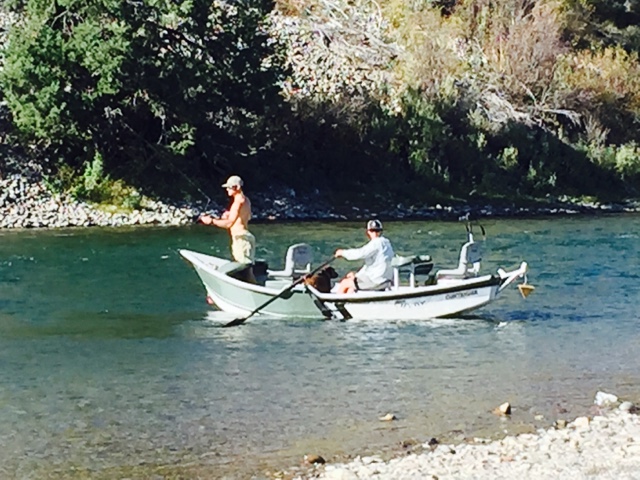 This is the fishing boat experience.  One or two fishing, one rowing.  The rower and the boat are usually rented for a half day or all day.  Some folks have their own boat but you can’t fish and row at the same time. We talked to an older fellow who was all decked out in his fishing regalia for walking in the water.  He was from the local area and said fishing had been very good.  They catch and release cutthroat trout.  You can keep one a day if we understood the rules.
Another great day in the Tetons.
More later.
Roger and Susan