There are many side roads and trails in the Tetons.  Some have names, some do not.  Some are easy to follow, many are not.  It is up to each visitor to look for these places and to go or not go.

Signal Mountain is an area along the side of Jackson Lake just south of the dam.  Everybody is looking towards the lake, towards the lodge but off to the right is a small road that leads to Signal Mountain, up about 1500 ft above the valley floor.
Fairly steep winding road but it was paved. 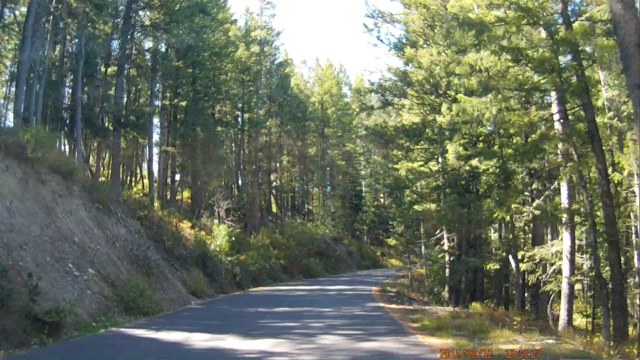 They were doing brush and tree trimming along the side of the road.  All of the trimmings and logs were neatly piled up.  We wondered if someone was coming back to pick them up.  We had not seen this anywhere else.
Near the top the views were amazing. 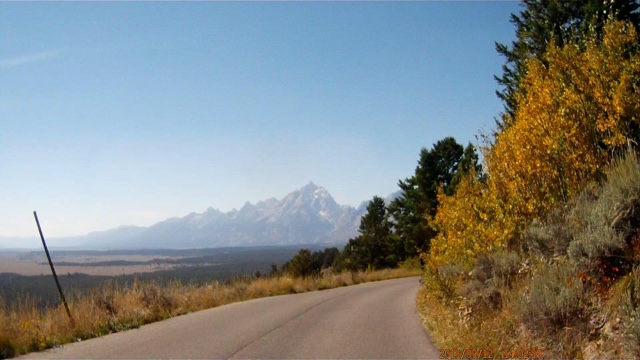 There was a parking area and some trails towards the west. 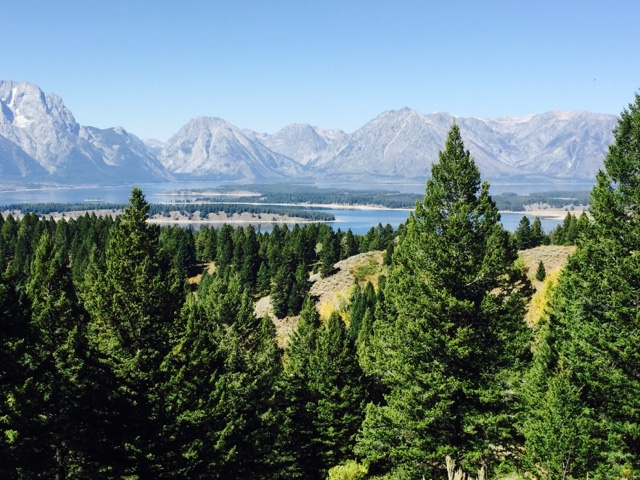 Jackson Lake is pretty big, 7 miles wide and 15 miles long.  About 460 ft maximum depth.  The natural lake was expanded when an agricultural group from Idaho proposed building a dam.  They would build it and maintain it in exchange for water rights to any additional water it added to the lake.  Three dams later the latest one is “earthquake proof” beyond anything ever recorded here.  The new maximum water level is 39 ft above the original level. Lots of water for Idaho farms.  They rarely use it all or even half of it. Colter Bay exisits because of the higher water.  If the farmers used all they could Colter Bay would be empty. Every angle looks different and I just never got tired of looking up at the mountains.  Up on Signal Mountain I didn’t have to look up as much. 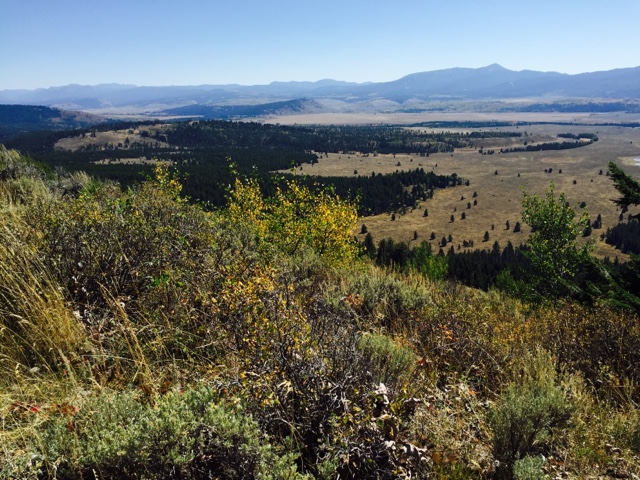 The valley (Jackson Hole) goes a long way to the north and east all the way to Yellowstone. 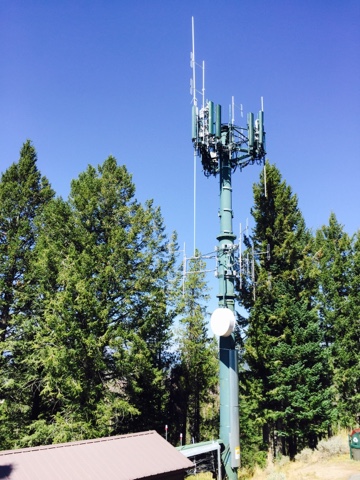 Why is it called Signal Mountain? Well this big mast with microwave, radio, cell and who knows what else tells the story. Probably why the road is paved and they were mitigating fire risk.  5 Bars up here.  This is the highest point in the valley.
No buses, no trailers, no RVs.  Actually not too many up here at all.
Heading back to Colter Bay we had driven by the Chapel of the Sacred Heart a few times but not this time.  It is a small log church built in the early 1900s to serve the Dude Ranch visitors.  It was rebuilt in the 1940s and again in the 1960s and then a major rebuild in the early 2000s funded by a New York family and Wyoming family in memory of the 9/11 victims. 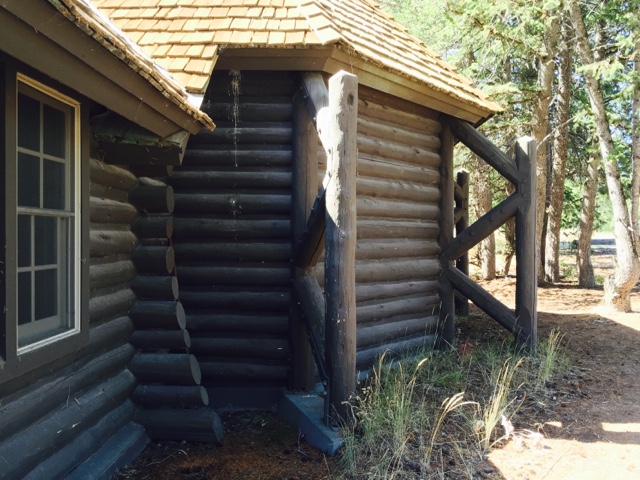 It had log flying buttresses.  Neat!  It was on a sturdy concrete foundation.  The latest rebuild should last a long time. 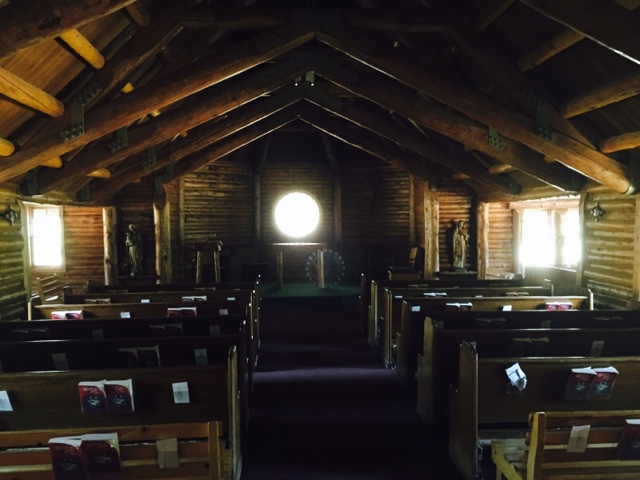 Very quiet inside except for the door that creaked loudly making sneaking in after the service started next to impossible for the late rising dudes.  I can just see His Dudeness trying to slip in in his bathrobe with a quart of milk.
There was a lovely stained glass window. 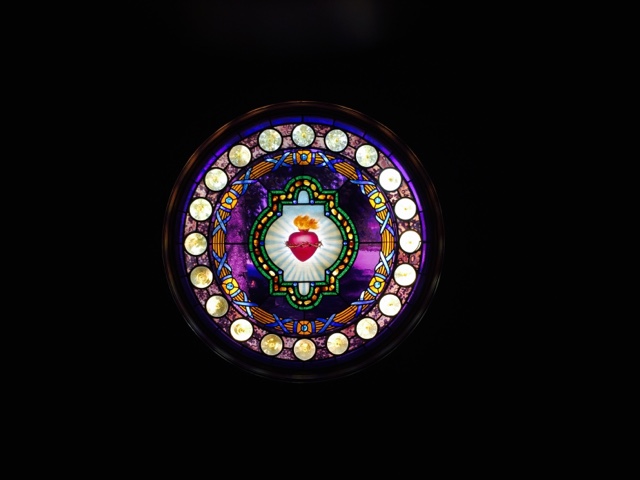 And a nice wood carving. 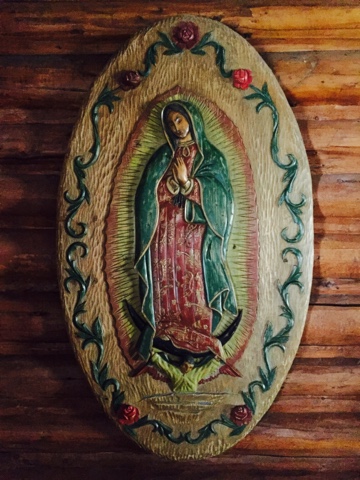 Another nice place to see.  So many of them.  You just have to stop.
More next time.
Roger and Susan.