We have really enjoyed our time here in Colter Bay, Grand Teton National Park, The National Elk Refuge and Yellowstone National Park.  There is so much to do and see that two weeks is hardly enough.

In 1980 when we were here we arrived in the Tetons just before July 4th.  Our friend, Roger Henry, flew to Billings, MT, rented a car and came down and stayed with us for week. That was a very busy week. We stayed at Jenny Lake in our small Class B (big van camper). Today the Jenny Lake Campground is tents only. We went on a horseback ride around one end of the lake, up Cascade Canyon towards Lake Solitude. This was an epic horseback ride. Not just an hour sissy trail ride but an all day up really steep, rugged mountain trails kind of ride. And it was raining. It was raining when we got to the stables in the morning. Ponchos on. And it rained every step of the way up the mountain until we couldn’t go further because there was several feet of snow covering the trail and the guide didn’t want the horses to go through the snow.
We stopped there for lunch in the rain and several folks including Roger Henry walked some distance through the snow only to find Lake Solitude still covered in ice.
It gets worse. It was still raining, drizzling perhaps but by this time we were wet and cold. The ponchos had long ago given up on their job.  Rain ran down the back of the poncho, down our backs, down on the saddles down our pants. Everything was wet. And we had maybe 10 miles to go, straight down.
The back end of the saddle has a raised rim to keep you from sliding back.  Going downhill you lean back to stay vertical.  Wet everything, constant back and forth, constant contact.  Maybe you get the idea.  We were sore, tired, cold, hungry and rubbed raw from wet jeans rubbing on a wet saddle of several hours.  Imagine a cheese grater.
What a memorable trip. We have scars to prove it.
There is no longer horse back riding at Jenny Lake.
And then the three of of went us to Yellowstone to finish out the week.  Roger went out on some long solo hike to prove that he was not a tempting grizzley bear snack. We nursed our wounds.
By the time we left Yellowstone six weeks had past. We changed campgrounds several times and had a really good time.  We had our dog, Xenia, with us.  She was a 65 lb Malamute. Best dog ever.  We think back on that time and while we were glad she was with us we realize now that there were things we didn’t do because she was. We could leave her in the camper for quite a while but not all day.  Today as then you can’t take your dog on any trails. And today it is even more restricted, you cannot leave your dog unattended in your car or RV.
So finally it was time to leave the Tetons. 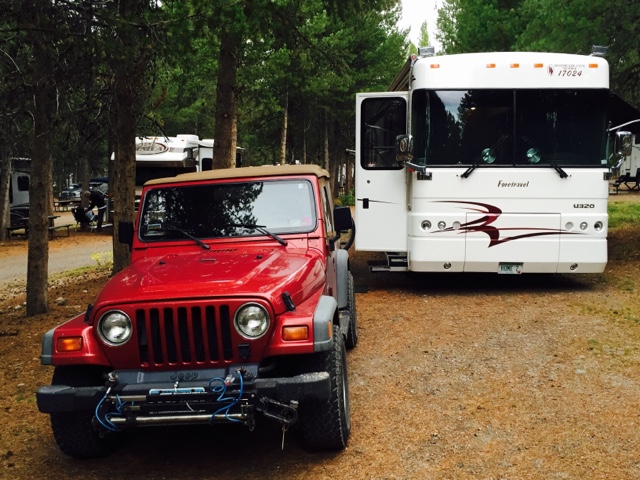 It was supposed to rain so we packed everything up the night before.  And it did rain pretty much all night.  Just a  steady gentle rain.  It got down into the 40s.  We were heading east through Togwotee Pass at 9,700 feet. I was concerned about snow or freezing rain.  The next night was supposed to be in the 30s so we were going to go.
The highway was almost deserted going east from the Tetons.  It was a good road, two lanes most of the time, plenty of passing lanes.  Most of the grades were 6% or so so we had no trouble just climbing up over the pass.  The rain had stopped about half way up the pass and once over the pass the clouds broke up and we had a very pleasant drive east towards Camp WalMart in Caspar.
This part of Wyoming is very scenic, lots to look at, big rolling hills, trees.  The Medicine Bow mountains are off to the south.  This would be a good route coming back.
More later,
Roger and Susan