A little slow getting this one done…

Whitewater State Park is one of Minnesota’s favorite state parks. It is about 90 miles south of Hastings between Rochester, MN and Winona, MN. This part of Minnesota is big rolling hills with lots of rivers heading east to the Mississippi River.  And the Whitewater River does just that, flowing through a valley with abrupt bluffs on either side.  Other rivers like the Trout Run River flow through their own valleys into the Whitewater.
This part of Minnesota was not smoothed out by glaciers in the last Ice Age but as the glaciers north of here melted and retreated huge water flows carved the valleys that now contain the Whitewater and its tributaries.  All of this would make one think the Whitewater River was a good sized river.  We did. We thought it would be fun to rent kayaks and try them out.  The truth is is is a fairly small stream, good fishing, a small dam and a swimming area but a Whitewater kayaking river?  Not quite. 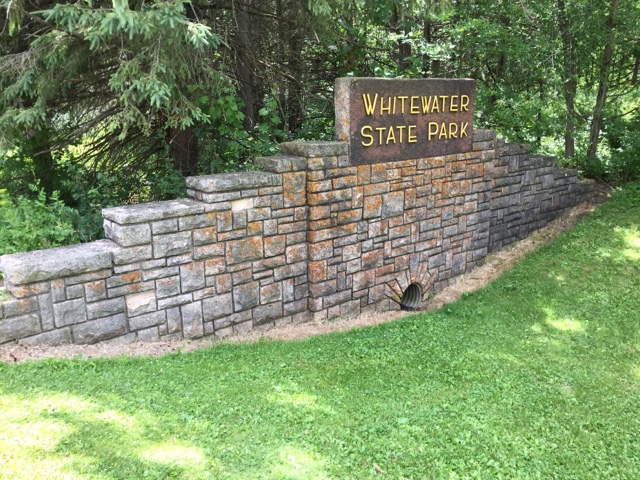 This is the original Park Entrance sign built by the CCC in the mid 1930’s. The park is much bigger now and there isn’t even a road here anymore.  Quite amazing though was that the original CCC camp  was in use until WWII started.   Then the focus changed on what was important to do next.  But the camp was still there and German prisoners of war were held there from 1943 until the end of the war.  They worked on local farms to help raise the food the country needed at that time.  After the war the camp was a summer camp for kids until it was destroyed by a tornado in the mid 50’s.  It is hard to imagine a tornado in this deep valley.
We checked out the park maps before we went and it looked like there was a pretty limited chance to go biking so we left them home.  Plenty of hiking trails to try out. Campgrounds looks nice, plenty of room in each site.
We went for five days, a quick trip. But these are always nice, just pack up a few things and go. When we get there all the stuff we busy with at home just stops. It is really pretty amazing. We are just there, the two of us with with time to do just what we want. 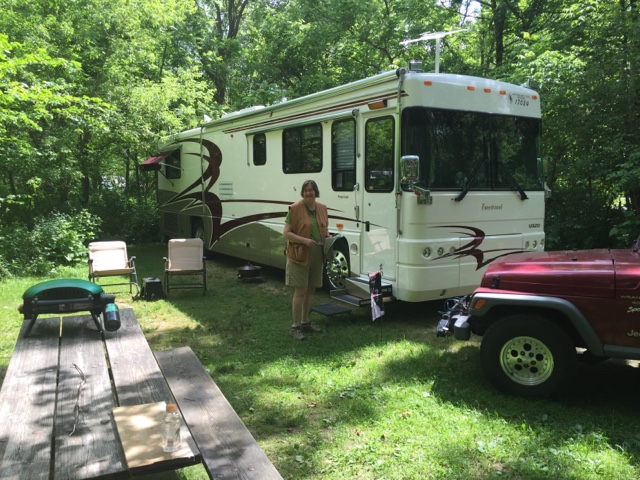 There was no cell phone service and no TV.  So it was a couple of old favorite Foyle’s War episodes and some long overdue reading.

The swimming beach was at a bend in the river were the was a small CCC built dam to make a pool. Lots of day users here. It is not too far from Rochester.  This little girl and her swim toy caught my eye. This was only a week or two since a kid about her age got killed by an alligator at a hotel at Disneyworld in Florida.  It came right up out of a pond and grabbed him.  I’ll bet she hadn’t heard that bit of news. 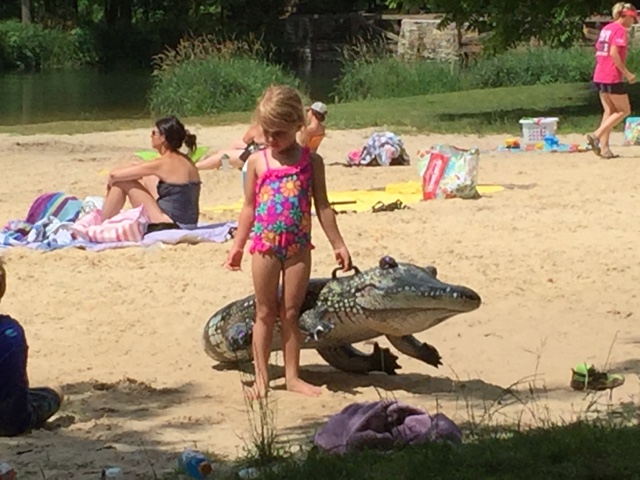 One day we went on a hike through a meadow of tall grasses along side the Whitewater River. There were people fishing and actually catching fish.  On the far side of the river the cliffs rose quite high. 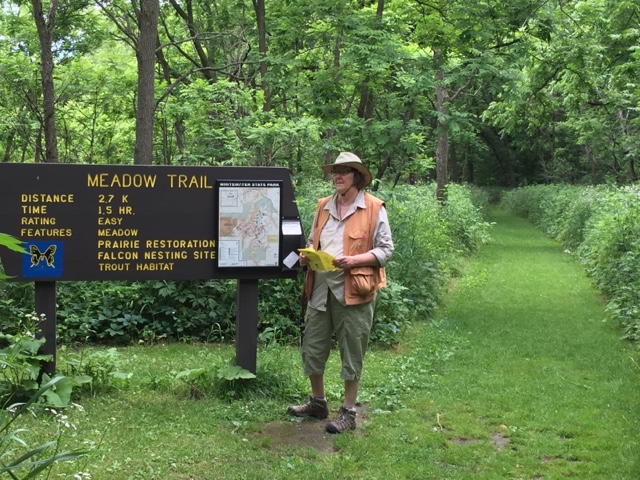 The tall grasses along much of the trail were just going to seed.  As I walked along I pulled handfuls of seed from the tall grass and stuffed them in my pockets.  When we got home I had a good sized plastic bag full.  They went out in our back woods.  Maybe they will grow. 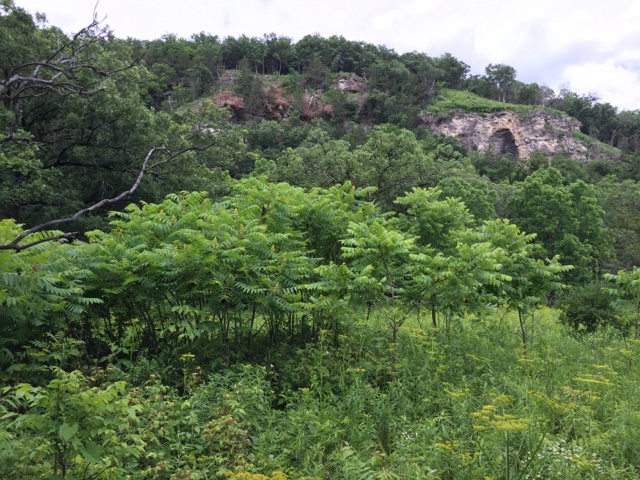 Another day we went on a hike along the Trout Run River.  Hardly a river but it might have been bigger many years ago. This river was much clearer with a rocky stone bottom compared to the Whitewater River, just what trout like.  There has been great conservation efforts in the Whitewater River watershed to improve water quality and fish habitat. The Trout Run River is said to be what it was like before settlers arrived in the 1800’s.
The trail follows the winding river.  At some places the trail is almost a road. Not by chance because this was the path the CCC boys took to an old quarry far upstream. 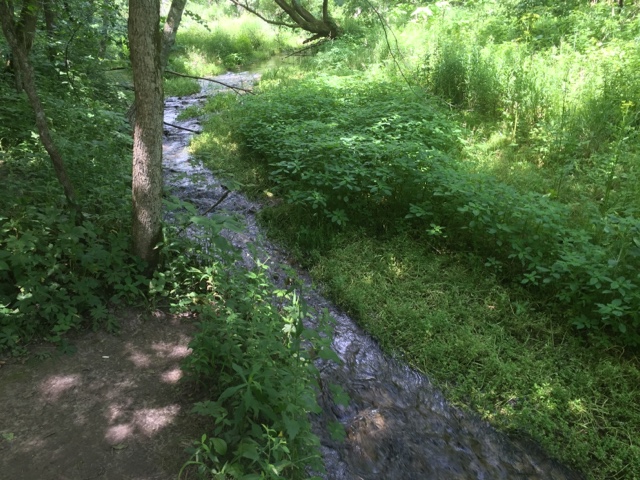 At the site of the quarry the cut faces of the rock can still be seen after more than 80 years. The trail ended on top of a rise next to the river. It was a man made hill of rock and dirt that served as a ramp to a rock crushing machine powered by a steam engine.  The crushed rock and the quaried rock were hauled out on small trucks, perhaps even horse drawn wagons for use in building roads and structures in the park.
All that is left today is the trail and the hill. One can imagine the path of the road as you walk along the river and marvel at the effort put forth by young men whose work we still enjoy today. 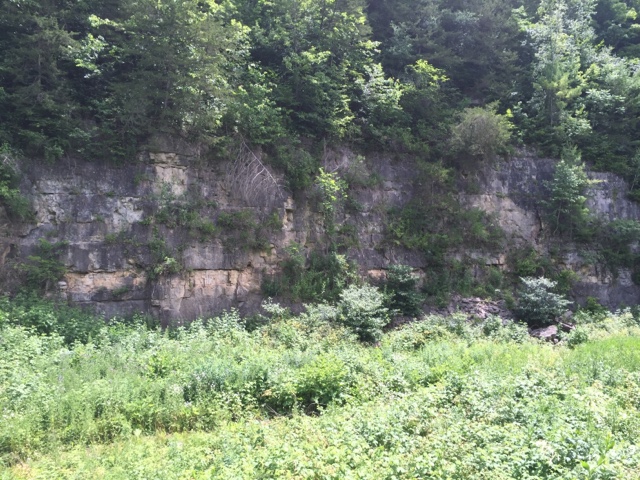 So that is this trip. Home for a month, stuff to get ready for our next adventure, a six week slow trip from Mackinac Island to Duluth along Lake Superior’s South Shore.
More later.
Roger and Susan