Normally you would have been hearing about some adventure here or there when we headed south for some part of the winter. Well things happen, we stayed home.

I was working at a Habitat House in early December and while doing nothing but standing there slipped on some ice and fell squarely on my shoulder. It hurt for a week, I went to see the Doctor, XRays revealed no broken bones, three weeks later I went back because it was worse. An MRI revealed a “massive” tear in one rotator cuff tendon, more than 4 cm. Two more tendons were torn, 3 of 4, pretty good job, Roger! . And there was a torn bicep muscle tendon and quite a bit of muscle damage as well. And then there was the rampant arthritis as well.
A visit to an orthopedic surgeon got me into the surgery schedule in under two weeks. Almost three hours of surgery and an overnight stay in the hospital, a bucket full of drugs and an arm in a sling and I was on my way. A week of significant discomfort, another week of just plain pain, two weeks sitting up in a chair to sleep and then Physical Therapy started. Two and a half months of movements and stretching to regain some range of motion and initial strengthening. The shoulder is very fragile in these early stages so care is required.
A couple more trips to see the doctor said I was on the right path. At this time I am just past three months. 40% recovery. Three more months of PT now with increasing resistance and weights will get me to 80%.
Enough of that.
So after sitting in the coach house since November (except for a few short warm up drives) the coach and we were ready to get out. So the North Shore was the destination. Spring time melt and runoff should make the rivers and falls pretty spectacular. In all the years we have been going to the North Shore (maybe 50) we have never been there in the Spring. This is the year!
We decided to stay at Two Harbors. The city has a nice city owned campground at Burlington Bay.  The trouble was that it was not open. But a call up there fixed that. It wasn’t officially open but the power was on and it was 1/2 price and we were welcome.
It was a nice drive up to the North Shore on Saturday. Spring retreated about one day for every six miles. By the time we got to Two Harbors it was much colder, the buds on the trees were just coming out about like it was in Hastings a month ago. We found a very nice site (we were the only ones there) and went the wrong way on the road so we could drive in facing the lake. A nice view from the front window. 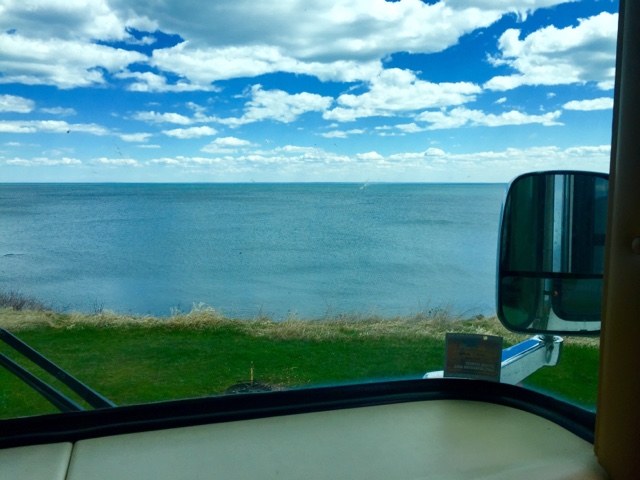 We went for a walk through the campground which is pretty normal for us when we arrive somewhere. What does it look like? Who else is there? We have been to Burlington Bay before so it was familiar. We walked up to the office, no one there of course but there were a few envelopes to put some money in for camping and a mail slot to drop it in. 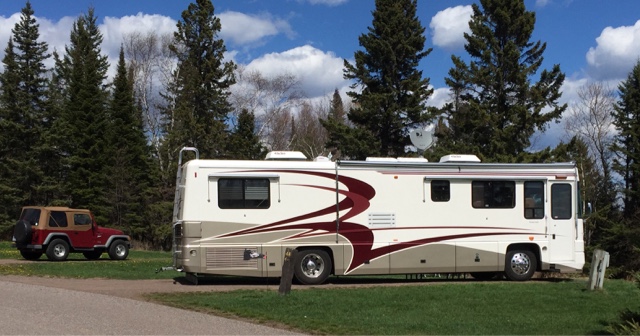 Susan got our comfy outdoor chairs out and we sat in the afternoon sun. The lake was fairly calm. We could see the South Shore all the way out to Sand Island, part of the Apostle Islands National Lake Shore. It felt good to be there.
We brought along a Netflix DVD, “The Second Best Marigold Hotel”.  We were tired and thinking we would get to bed early but by the time we got through the movie (we liked it) it was after 10.
Sunday morning our friends Bob and Ani Flagler from Duluth and Ed Schulze from Brainerd came for a visit. So first thing in the morning we baked the last of our apple pies from our harvest from last fall. They all arrived about 10. After some visiting we went up to Gooseberry Falls State Park to check out the falls and the river. Lots of water coming over the Lower Falls. There were kids all over running around in the shorts and bare feet. The water was quite cold but the sun made the rocks warm. 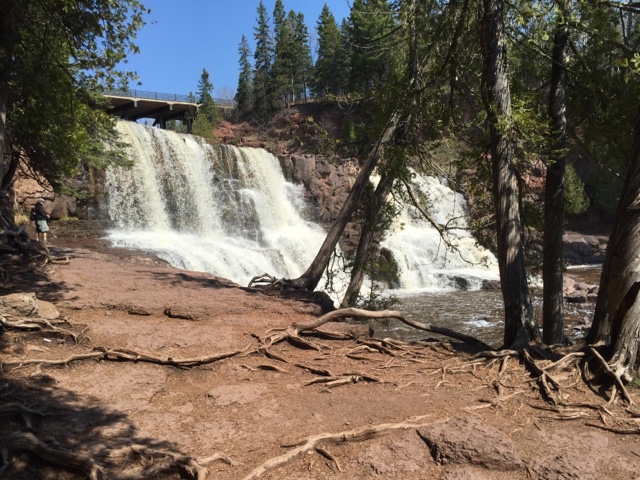 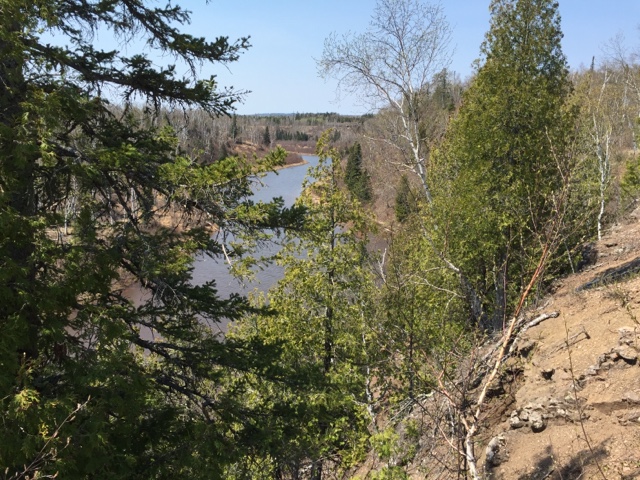 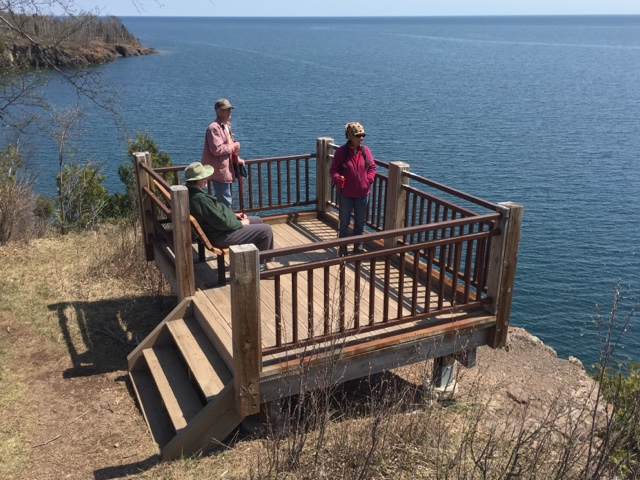 The trail heads a bit north along the lakeshore and then back inland along Nelson’s Creek. The creek flows over a cliff edge at the lake in a small waterfall.  The Nelson’s Creek side of the loop is wetter and cooler than the Gooseberry River side of the loop. This gives you two distinct looks at a local ecosystem. But everywhere up here the Birch trees are suffering as they have been for the past 30 years. The Birch borer beetles are moving down the lake slowly killing most of the Birch trees. There was a big ice storm a few years back too and many trees that had been weakened broke off under the ice and wind loads. In some areas the birch trees are all broken off about 20 ft above the ground.  There are significant restoration and replanting projects going on in all of the State Parks along the lake. And many tall fenced sections to protect the new trees from the deer. 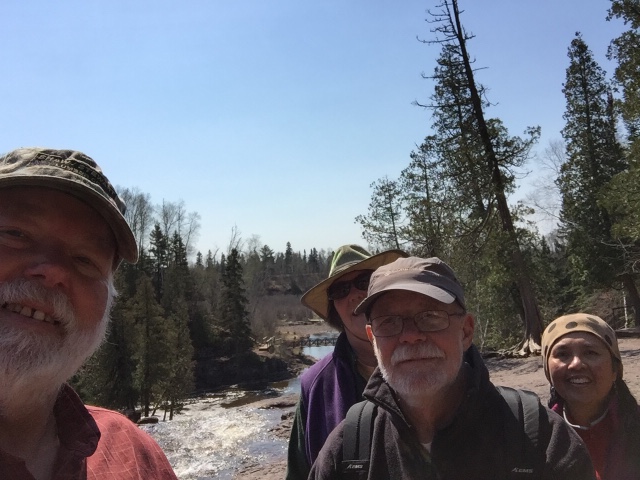 After our hike we came back by the Upper Falls of the Gooseberry River. 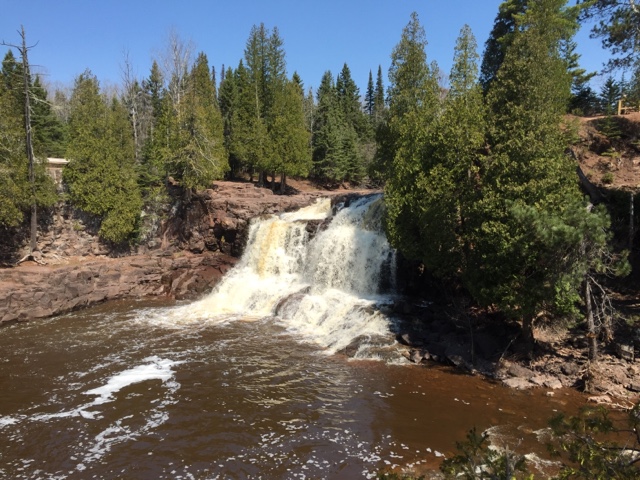 It was Sunday, Mother’s Day and there were many visitors. We stopped at the Rustic Inn for lunch but so had everyone else. So we went to Judy’s Cafe in Two Harbors for a tasty lunch and then back to our coach for pie. Yum. Bob and Ani headed back to Duluth. Ed hung around and ended up staying over night. Our first ever overnight visitor in the coach. He got the coach couch. It actually worked out fine.
Ed left for Brainerd after a hearty oatmeal breakfast. We packed a picnic lunch and headed up the lake for Tettegouche State Park and the Baptism River Gorge, one of our (mostly mine) favorite places to hike. It was a brisk day, temps in the 40’s and a brisk wind. The Baptism River flows through a deep gorge carved over millions of years through the hard lava rock down to the lake. Trails go up and down each side of the gorge from the lake to the High Falls where there is an old swinging foot bridge. From the north side trail there is a stairway down to the pool below the High Falls. It is 218 steps down and back up again. I counted each one down and then confirmed the count coming back up. 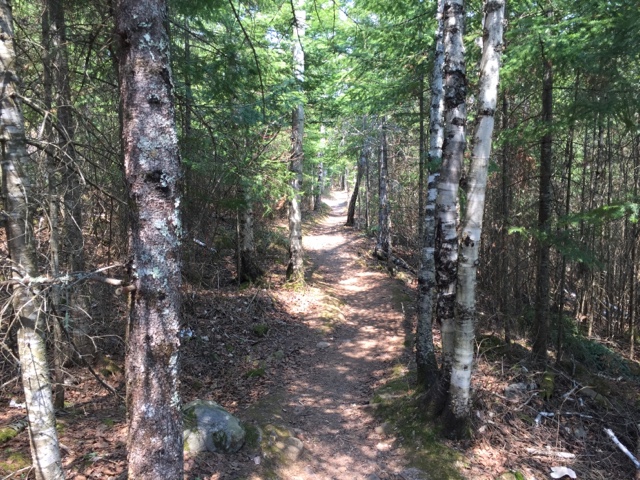 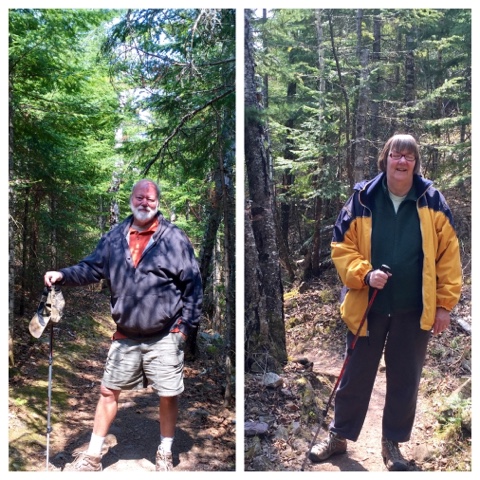 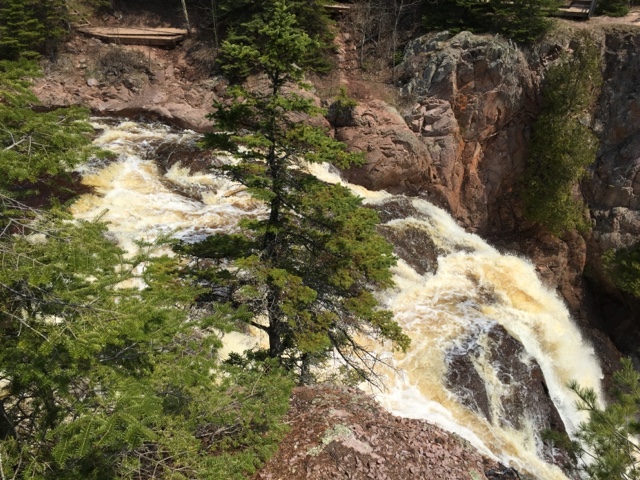 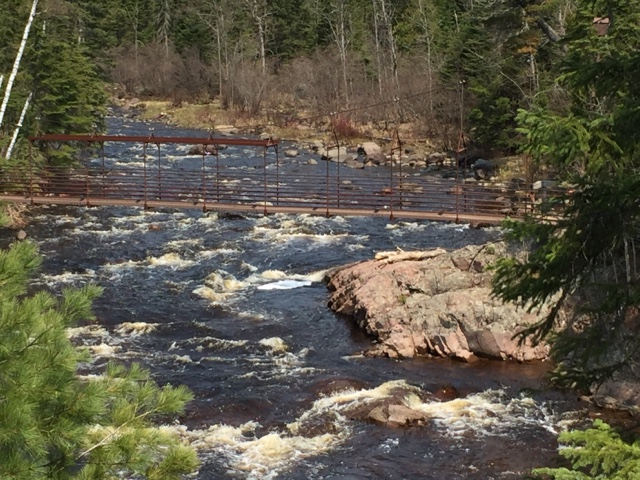 Further down on the south side of the gorge is the trail down to Two Step Falls. It is not two steps to the falls but more like two hundred, another cardio workout. For both of us coming off winter and somewhat limited activity for me this was a test. We took a few rest stops but kept on chugging along back up to the top. 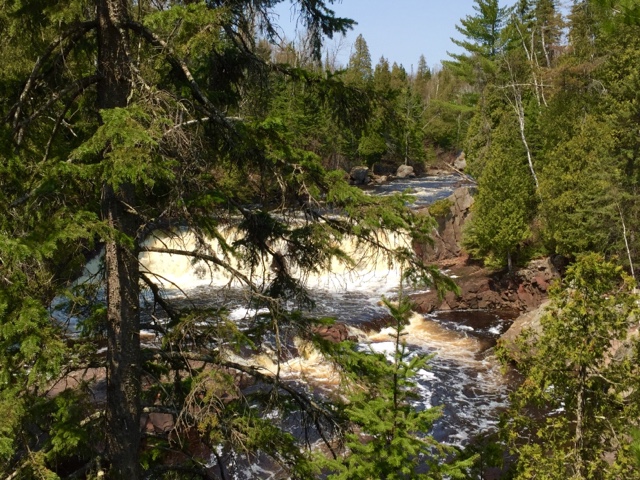 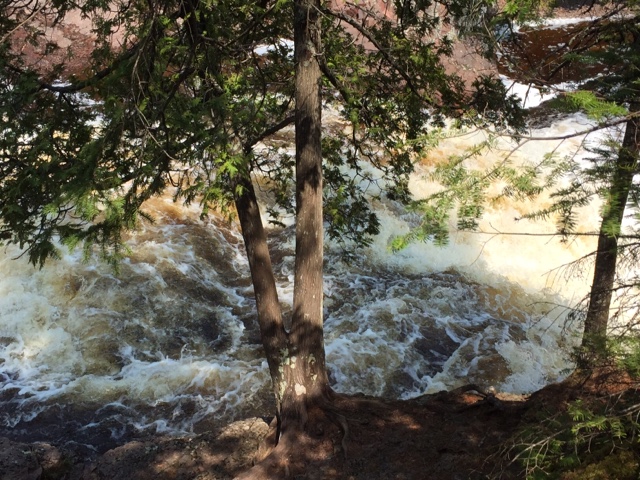 We ended up back at the visitor’s center for a great hot chocolate and our picnic lunch inside where the warmth felt good. Getting up north felt good. Seeing old friends felt good.
And then back to Two Harbors. We have an app that tracks ships and we could see in the distance a ship heading our way. It was the Presque Isle, one of only 14 Great Lakes boats more than 1000 feet long, headed for Two Harbors just 52 minutes away. 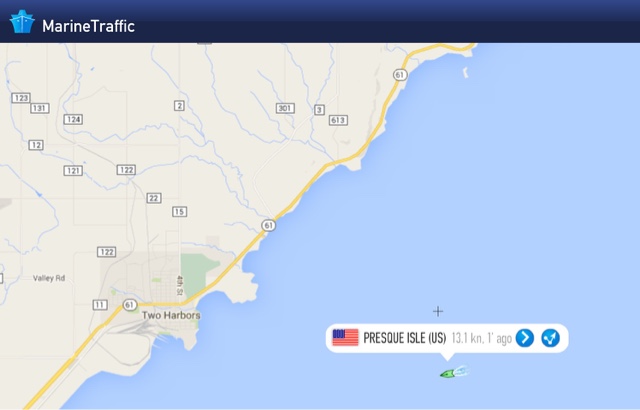 Burlington Bay is where the “s” in Two Harbors is.
I drove down to the harbor where the wind was blowing up significant waves, white caps all over. I walked out on the breakwater – all the way to the end – to see it come in. It headed right at me and then turned out in to the lake. A couple miles off shore it dropped anchors. With no tugs at this port it was just to much wind to get into the port. 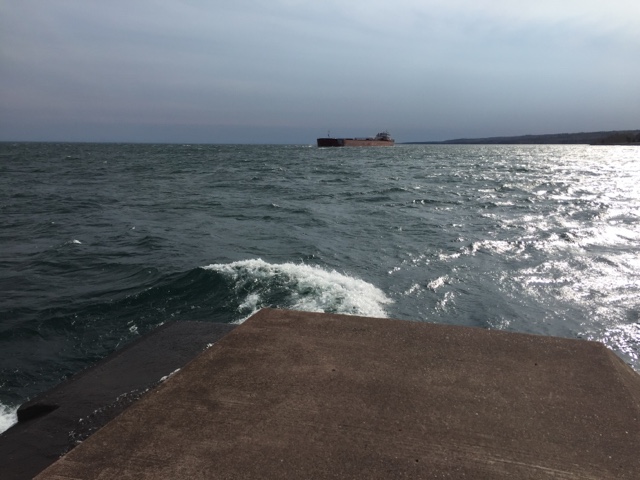 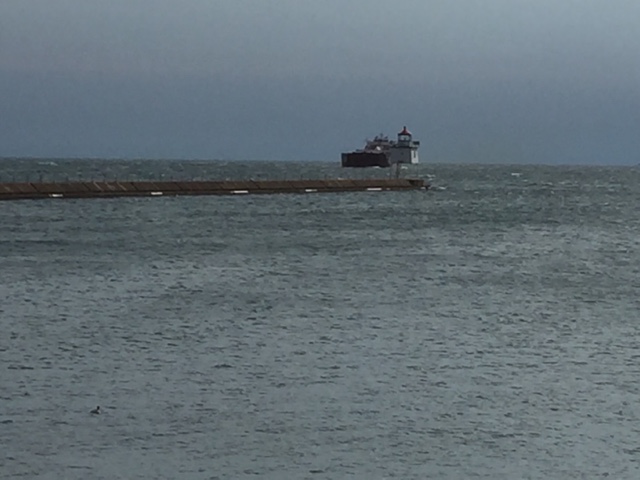 Sometime over night it got into port and took on a load of taconite and in the morning about 7:30 we saw it leaving. Very fun to watch it as close as it was.
So Tuesday morning we did our normal hit the road routine. Clean up a bit, put things away, check the oil and the tires. All set to go and it started to rain. We drove up to a flat spot in the campground and hooked up the Jeep, double checked all the connections and stuff inside, check the tail, brake and turn lights and set off for home.  It rained most of the way until just before we got to Hastings. We made a short side trip to the city owned public “restroom” for RVs where we emptied our waste tanks. Our coach has all airbag suspension so when we do this necessary task we let some air out of the tank drain side of the coach and add air to the other side to tip the coach to one side to help drain the tanks. Works great!
And then home. We disconnect the Jeep on a straight level part of the road leading into our place.  Susan drove the Jeep on ahead. I followed with the coach. I pull up just past our driveway and back into the driveway making a left turn past the shop, around another left turn and right into the coach house (fancy name for the barn, sounds better too). It took about an hour to move from one house to the other and have the coach ready for another nap.
We were amazed at how much greener it looked here after only four days. Springtime in Minnesota sort-of-thing.
We are going to try for one more short trip before we head toward Mackinac Island at the end of July for a leisurely trip along the South Shore of Lake Superior all the way to Duluth with our friends Rudy and Carolyn from Houston in their Foretravel and Douglas and Amanda from where ever they were last in their Foretravel.  Maybe John and Kathy, more Foretravel fulltimers, will join us as well.  And we are meeting Ed Meyer and Barb Jackson on the way over to Mackinac for one day as well.  They are renting an RV for a week or so, giving it a try.  We are hoping they like it.
That’s all for now.