Tuesday, 8/9/2016
Susan and I went up to the Soo Locks this morning to visit the weather station museum. This was one of the first of the US Weather Service stations from the mid 1800’s whose task was to try to watch the weather and give early warning to ships. It was a small but nice museum with what else, a gift shop. We got some ship cards, sort of like trading cards for Great Lakes ships/boats. We got a couple of iron-on patches to add to our collection. These are all stuck to the window trim with velcro. They make a colorful addition to the decor and a reminder of where we have been. Susan got a TShirt, “Lake Superior- salt free, no sharks” and I got a nice Weather Station TShirt.

There is a drive-in restaurant called Clyde’s near the campground. They are supposed to have great food. It looks much like an old drive-in with the slanted windows and neon lights. The Campground manager suggested another called the West Pier. So we went to try that. It was about the size of a two car garage. Somebody came running out to get our order, one cheese burger, one onion rings, one butterscotch shake. Quick service. We took our lunch back to the park next to the locks.

Lunch was great. A massive half hamburger each. We were stuffed. THe Algoma Enterprise was just exiting the lock so we had entertainment as well.  They were repairing a valve in the bigger second lock so thery were using the slightly smaller first lock.  It is about 30 ft from where we were eating our lunch.  This boat was huge! 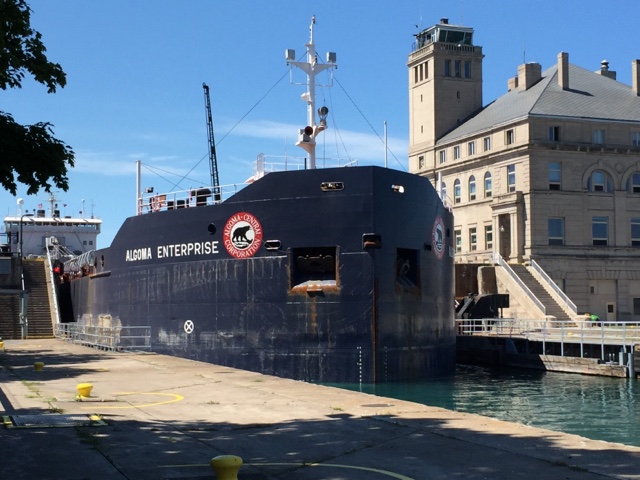 Our friends Douglas and Amanda arrived today mid afternoon. They were coming up from Indiana and had to cross the Mighty Mac. Good for them, I am not sure Susan could do it. 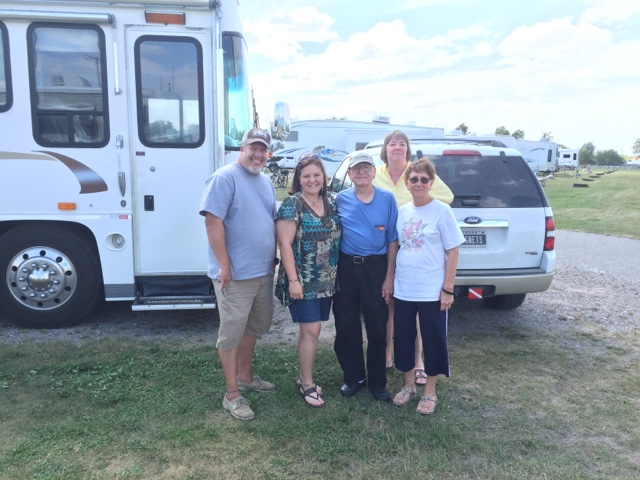 They brought their bikes with them so we rode around the campground checking out all of the other camper and camping things. And then around again. Then up to the the boat launch and next to Clyde’s to check it out. Looks good so we will try that place too. Then we rode down to the Sugar Island Ferry. Cars are lined up there all the time for the ferry ride across the shipping channel to Sugar Island. The ferry ride is less than a quarter mile but it is the only way to the island.

Ships, boats of every size go by all the time. There were passenger ships that went by.

And the .”footers”, the 1000′ long bulk carriers right out the front door. 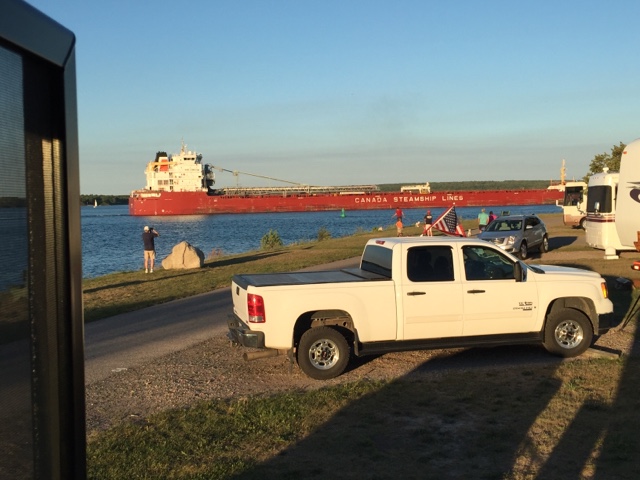 A very nice campground right on the river. 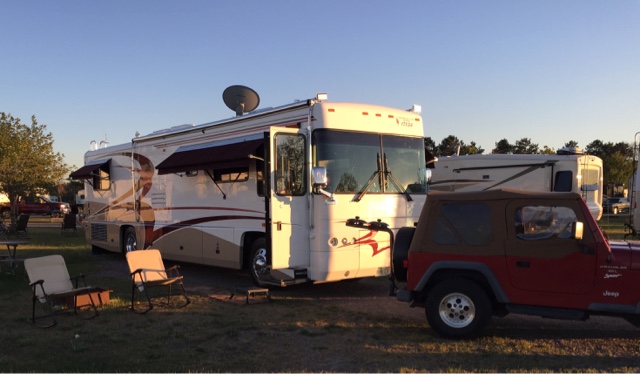 A footer went by this morning and so Amanda and Douglas and Susan and I piled into cars and hightailed it down river to the Rock Cut.  It was about 15 miles downstream.  The St Mary’s river is a 65 mile run from Lake Superior to Lake Huron and requires these big boats to make more than 20 major changes in course. In the original route there was a single channel only 300′ wide that forced ships to pass very close to one another or wait.  So in the early 1900’s the West Neebish Canal project was started.  It was and still is called the Rock Cut but the West Neebish Canal sounds good too.  It is more than 300 ft wide and about a mile long and 20′ deep.  The depth has been increased over time to now more than thirty feet.  Huge piles of rock are still everywhere. Looking at it now one would think it was dug just a few years ago. 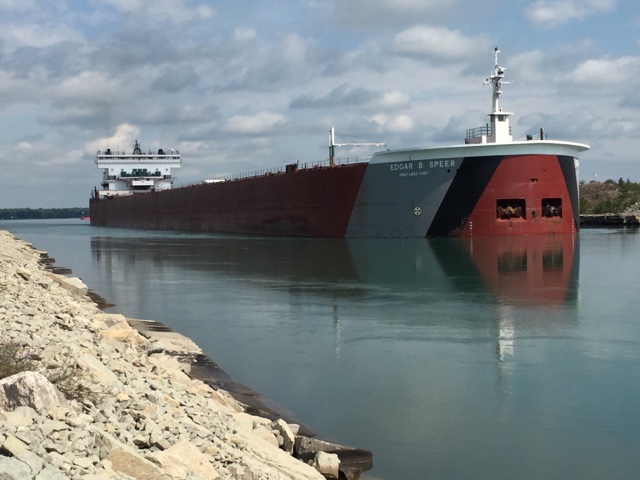 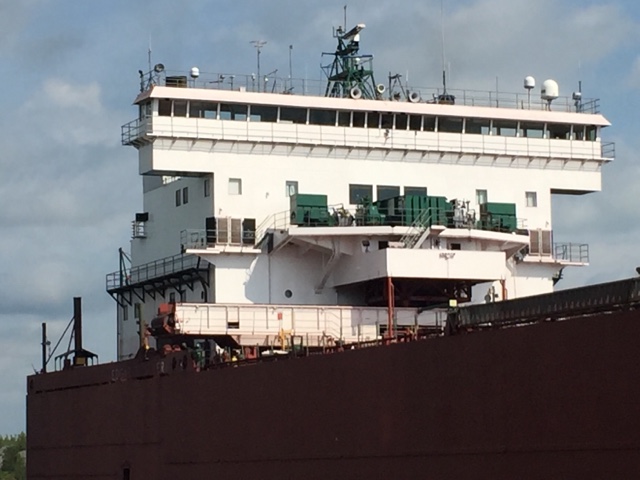 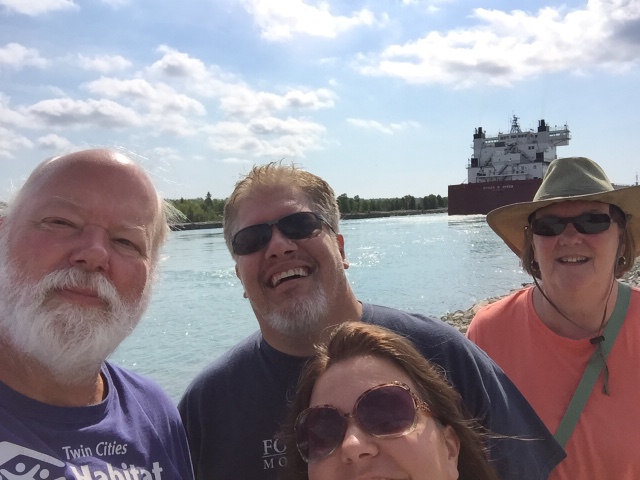 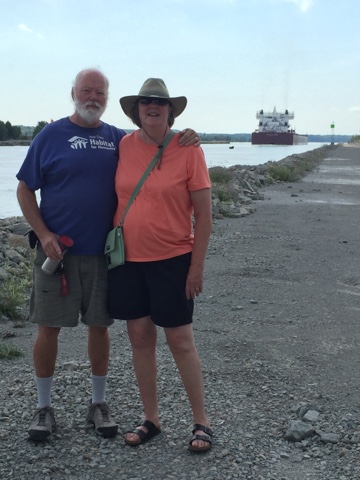 More boats all day.  We went to Clyde’s for diinner and had s’mores for dessert. Stayed up late again with the youngsters.
More later,
Roger and Susan