This is something Susan and I have wanted to do for some time. Last summer when we were in Wyoming there were kayaks for rent and it looked like fun. Then we saw them on the Snake River just for fun and with folks fishing. So now I want to try both.

The park folks delivered the kayaks to our site the evening before. It was a short portage to the river where we found a good launching spot. That was the easy part. Getting ourselves in and out of the kayaks was not pretty. But after a few tries at it we sort of got the hang of it. It still bordered on graceless

Douglas and Susan went first. Up stream and then back down for about 45 minutes.

Amanda and I had a go at it next. I wasn’t sure how my shoulder was going to do. A half hour into it and it was aching so I adjusted paddling procedure a bit and that seemed to help.

Rudy and Carolyn were the safety committee. Ready to whip out that new iPhone and do something. 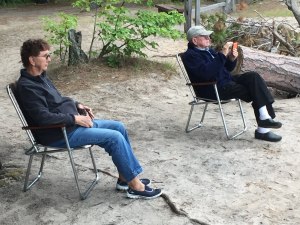 When we got back it was time for a break after demonstrating our Olympic Exit Style.

It was easy to paddle once we got in. The river was calm with a low current. There was a

light breeze. We were using ten foot kayaks. After talking to other kayakers we think longer paddles for us and maybe 12 foot or 13.5 foot kayaks would track better and give us some more leg room.

Amanda and Douglas went out again for almost an hour and then Susan and I did too. We all tried heading down river first and then upstream. 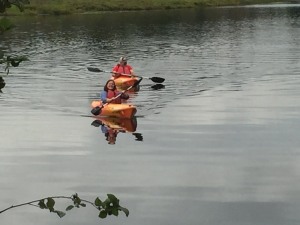 Susan and I went downstream almost to the lake. 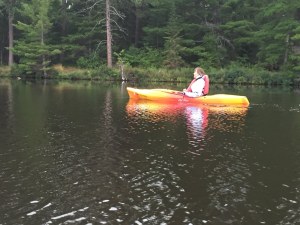 At one point I was paddling through water lily pads that were blooming. They smelled quite nice.

So we all got in about three hours of kayaking practice. All were experiencing some arm and shoulder fatigue. What else were we going to do but have home made ice cream courtesy of Douglas and Amanda. 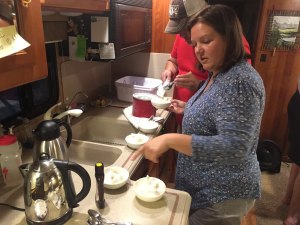 We liked it. We will do it again.
More later,