We are at the city of  Munising Tourist Park Campground. It is a pretty nice campground with a variety of types of accommodations. We managed to get full hookups which means electricity, water and a sewer connection. We are one row back from the shore of Lake Superior.  We were just not quick enough to get the front row seats.  We have been there before and they are spectacular.

It has taken me a long time to get Munising (Mew nis ing) to come out right.

We almost never choose this level of hookups, electricity is plenty for us and if it is not available we can get along for days.  We have a generator and a diesel boiler for hot water and heat and lots of batteries. Plus with 105 gallons of water and 160 gallons of waste tanks we can normally last 10 days or so. Can you get by on 10 gallons of water a day for two people?

Our travelling companions like water hookups and sewer if possible. They both have clothes washing machines. Douglas and Amanda just put in a front loading stacked washer and dryer. It is very nice and fits well in their 40 ft coach.  It takes up and entire closet, something we would not give up in our 36 ft coach.  It usually only takes a couple hours or less to do our laundry once every ten days or so. Douglas and Amanda also just put in a top loading drawer style dish washer. Wow!

There are water falls everywhere nearby, the Pictured Rocks National Lakeshore extends several miles to the east, the Lake is right here and there is this big island, a Grand Island, that is now part of the National Lakeshore. It was, many years ago, privately owned but over time it became part of the National Lake Shore.  There are a few private homes left, now leased back to the original owners for one more generation. There are several camp sites and a few rustic shelters for back packers on the island.

There are some gravel roads and a some trails too.  A ferry brings visitors to the Island to hike or bike or take a “bus” tour of the historic sites. The “bus” appeared to be the back seat of someone’s old SUV.

Douglas and Amanda brought their bikes because they knew we were bringing ours. So we packed picnic lunches, lots of water and with bikes on the rack, headed for the ferry and Grand Island.

The ferry ride was on a pontoon boat the first time we were here. Now they have a pretty snappy proper ferry launch.  More like a nice barge. 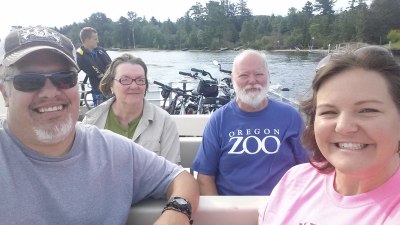 We stopped in at the Visitor’s Center for some history and a map.  Twenty plus hard miles counterclockwise. Eight to ten up if we went to the middle of the island on one side, across and back down the other.  We chose wisely.

These were the good roads. pretty smooth and not too hilly.

High bluffs and big hills is where we did not go.

Douglas and Amanda are good smilers. 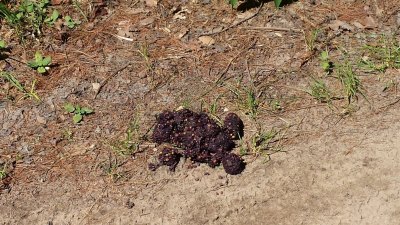 Can you guess what this is?  Pretty fresh bear poop. 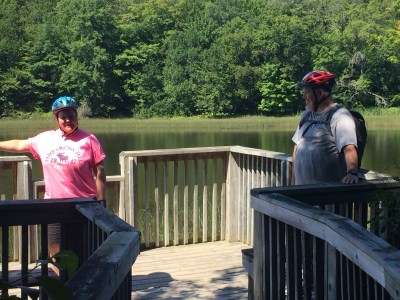 We stopped at Duck Lake for a rest.  There were lots of ducks.  Ducks eat stuff on the bottom of the shallow part of the lake, heads down and you can probably guess the rest.  First there were two ducks, then three.  The lunch wagon was in and soon there were five ducks feasting on bottom goo. 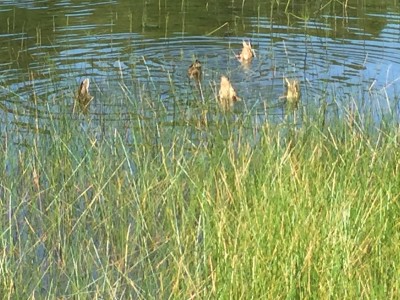 So from the dock it was clear that Synchronized Swimming at the Olympics has competition. 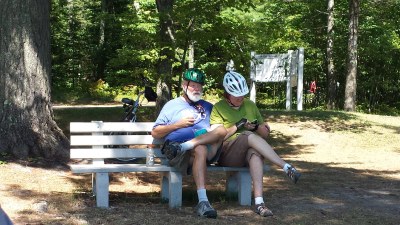 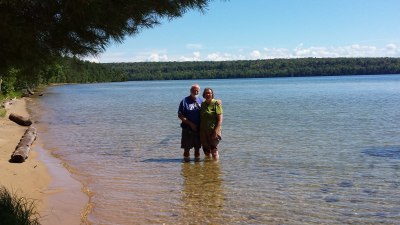 We stopped for lunch and a chance to cool our feet. This was a very nice beach where a summer home once stood long ago.

I liked this old stump by the water. it was about 8 ft across. 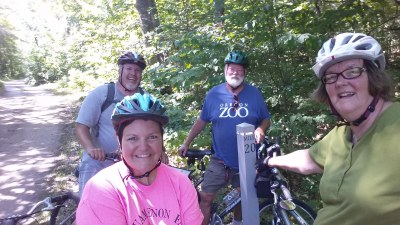 We made it to the 20 mile post (with a short cut or two). A bit butt weary but that’s biking.

The ferry ride home was quiet. Same with the ride back to the campground.  We were able to stay up for s’mores though after supper.  No campfire songs from this bunch of tired folk.