Skip to content
No, not the one in Minnesota, Grand Marais, MI.
From Munising we headed east along the lake shore towards Grand Marais, MI. along the Pictured Rocks National Lake Shore. We were hoping for a nice lunch at a place that we remembered that had good pie. The morning started out with a light rain.  We stopped at the Miner’s Castle overlook. 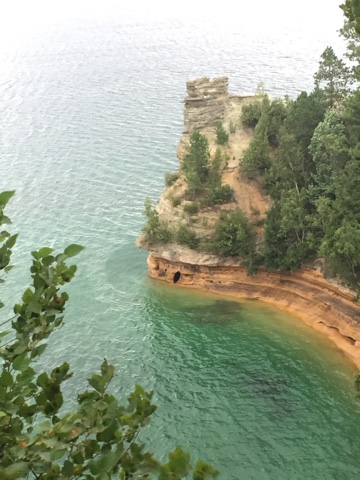 You can start to see the colored sandstone here that coninues for about 20 miles up the coast.  And then the rain turned into a down pour. So off we went in the rain. By the time we got to Grand. Marais the rain has subsided and we discovered our lunch destination was closed. After waiting in line for a half hour at what appeared to be the only other place in town for lunch we discovered another spot. It was like an old diner, small and slow. Susan and I ordered a fried egg sandwich. The other four of us ordered pancakes. Fried egg sandwiches came first, then one order of pancakes.  After some time the second order of pancakes showed up. It turned out that they could only make one order at a time.  So it was a leisurely lunch.
We found a little gift shop, are you surprized? They had some small bead and silver wire bugs that we thought would look nice with the pine trees we found in a gift shop in Munising. They do. 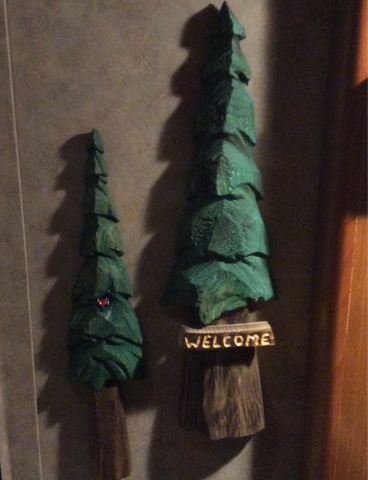 We drove around the campground at Grand Marais, not bad. And then headed back towards Munising. We stopped at the Log Slide at the Sable Dunes.  These dunes run about five miles after the Pictured Rocks toward Grand Marais. Wind has piled sand up more then 300 feet high along the lake. 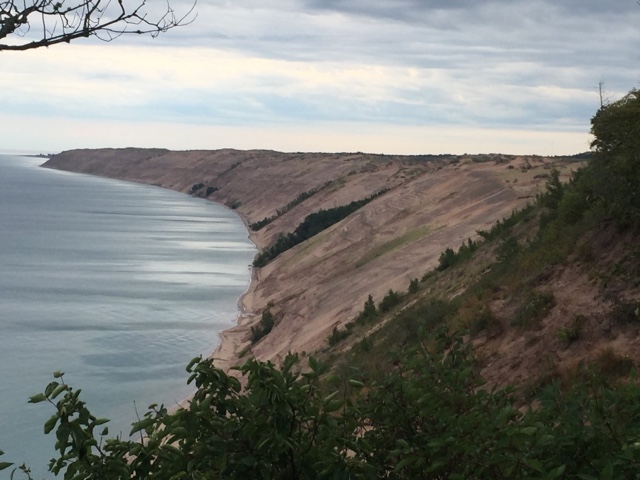 It was more than 500 ft down the face of the dune. Signs warned of the difficulty of going down (10 minutes) and then coming back up (1-1/2 to 2 hours). So we just looked.
In the late 1800’s logging was a big industry here.  Logs were cut and hauled to the edge of the dunes. A chute was constructed using logs and planks. Like a flume the logs were sent down the slide towards Lake Superior. They would hit the lake and be gathered into giant log rafts that would get towed to saw mills in Grand Marais and many other places even as far away as Ashland WI. These log rafts could be more than a quarter mile wide and a couple miles long. One mile an hour was about as fast as thet could get the rafts to move. 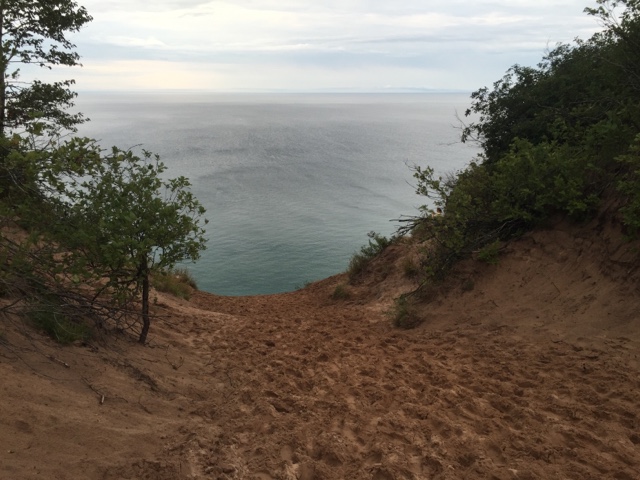 Do you want to slide? In spite of the rain it was a good day.
More later,
Roger and Susan
,,,