Amanda and Douglas (Susan calls them AmanDoug, Carolyn calls them the Children) are SCUBA enthusiasts. They carry all of their diving gear – tanks, dry suits, wet suits and a ton of other stuff with them.  They needed to get an August dive in so off we went to the laundry. They went to Sand Point on which there is Sand Beach to suit up.  We did our laundry, washed and dried, and drove to Sand Beach to see how they were doing.

Their car was there but they were no where to be seen.  And then we spotted their diving flag so we waited. 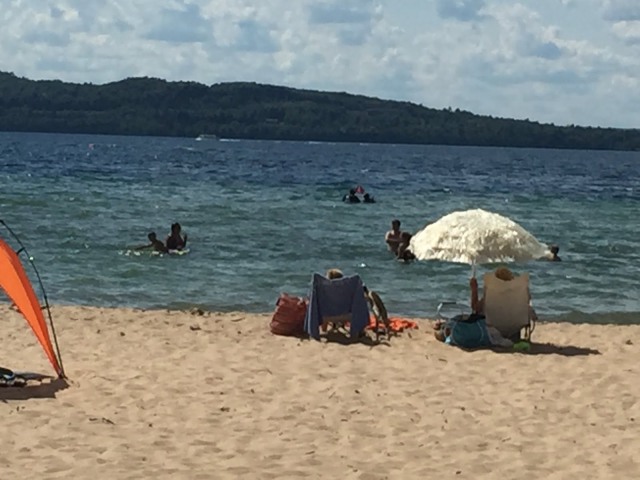 There were bubbles and then up popped two creatures dressed  head to toe in formal black.  They were out there for a long time doing something. Later they were telling us that they were having a hard time getting one of their flippers off.

They thought it was funny that we came to see them.  They sure had a lot of gear. Timers, depth gauges, weight belts and lots of things hooked to hoses.  They were in dry suits with layers of clothes underneath.  Amanda was dry, Douglas had a leak around his wrist so his sleeve was wet.

They saw some fish and some small white crayfish like things and brought up a pebble as a keepsake.

They were going to try diving near the high school but there was no easy access to the water but they got in their August dive.