Bayfield, WI is a pretty nice town on the South Shore of Lake Superior. It is the headquarters of the Apostle Island National Lake Shore.  The official population is less than 1,000 but in the summer visitors and summer residents make it seem much bigger. Bayfield has a large marina, ferry docks to Madeline Island and tour boat docks for sightseeing around the 22 Apostle Islands.  Fishing and lumber were the main industries a hundred years ago.  There is a very nice Maritime Museum and a great Bayfield County Historical Museum as well. It had a most unusual double pedestal sink in a display from one of the early barber shops.. 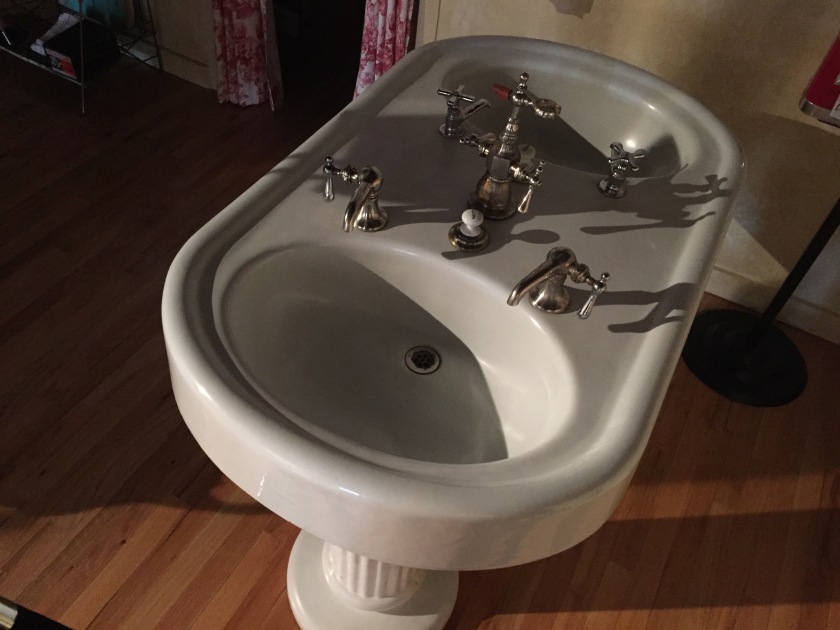 Just across the channel from Bayfield is Madeline Island, the largest of the Apostle Islands and the only one not included in the National Lakeshore.  There is a small town there, La Pointe, some permanent residences and many summer residences as well. There is Big Bay State Park with a campground there and another large marina too.  We have taken the ferry to the island a couple of times, once with our bikes for a ride about.

Rudy and Carolyn and Susan and I signed up for the Grand Tour of the Apostle Islands on one of the tour boats.

We got out tickets, got in line and managed to get seats on the upper deck.  It was a nice sunny day, hats were a good idea. 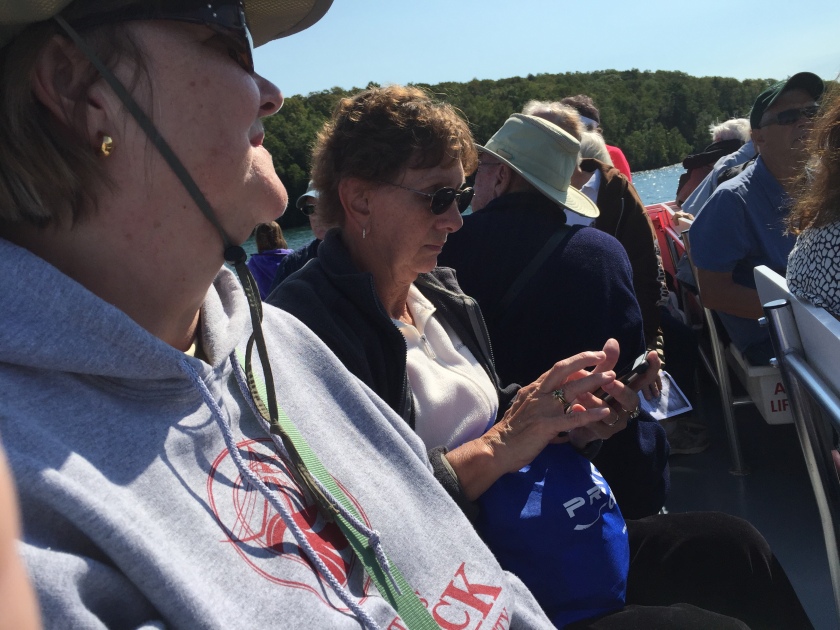 The Grand Tour went by most of the islands and right by the lighthouses on Devils Island and Raspberry Island.  You can see where Sand Island is and right across from there is Little Sand Bay.  This channel is slowly filling in with sand (what else).  Today it is only 6-8 feet deep in most places. in the early 1900’s it was much deeper. 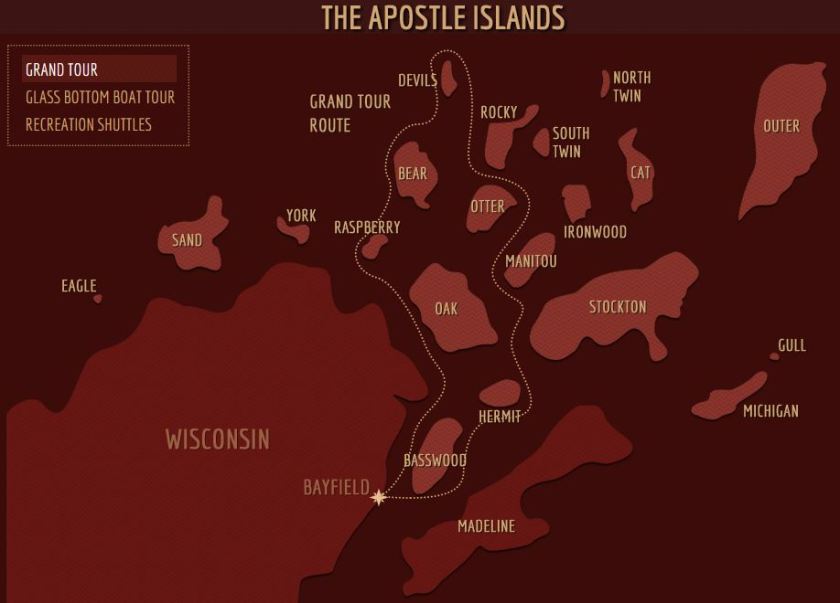 The Light Station at Devils Island marked the outer most point of land in this area and provided a reference point to ships passing by.

The light station is still in use although the light is now an automated electric lamp rather than a kerosene lamp shining through a Fresnel lens which allowed the light to shine out for as much as 20 miles.

The light station is open for visitors, there is a small boat landing, and has interpretive guides there to show you around. They are mostly volunteers who live here during the summer.  There are accommodations in the Keeper’s House for overnight visitors. Reservations required.The other buildings were for the Assistant Keepers and their families and for boilers to generate steam for the fog horns. Keepers often arrived for duty before the ice was out and stayed on the Island until late November. It was a rugged life with not many amenities.  Certainly not many shopping opportunities.

One of the interesting features id Devils Island is the dramatic change in rock type from one end of the island to the other.  From the vantage point of the cruise boat it was easy to see a pretty clear line of where the rock type changed. The side of the island facing the main lake is much softer sandstone which made for some pretty amazing sea caves.

The wave action carves away the softer rock creating the caves.  This day was pretty calm but you could still hear the whooshing and booming sounds of the waves going into the caves.  Look back at the Keepers House picture.  On a rough day waves would break over the cliff face up onto the yard and cover the house with spray.  in late October and November it would be ice. 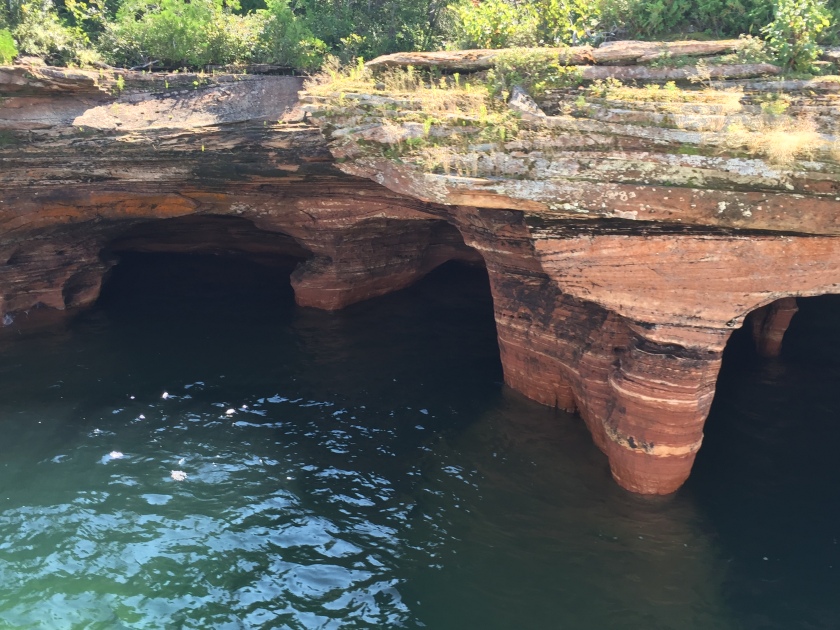 We also went by the Light Station at Raspberry Island and a restored fishing camp.  During the fishing season, men would live at these camps all summer fishing and storing the catch. Big service boats would come by every day to pick up the fish.  It kept the fishermen on the lake longer. 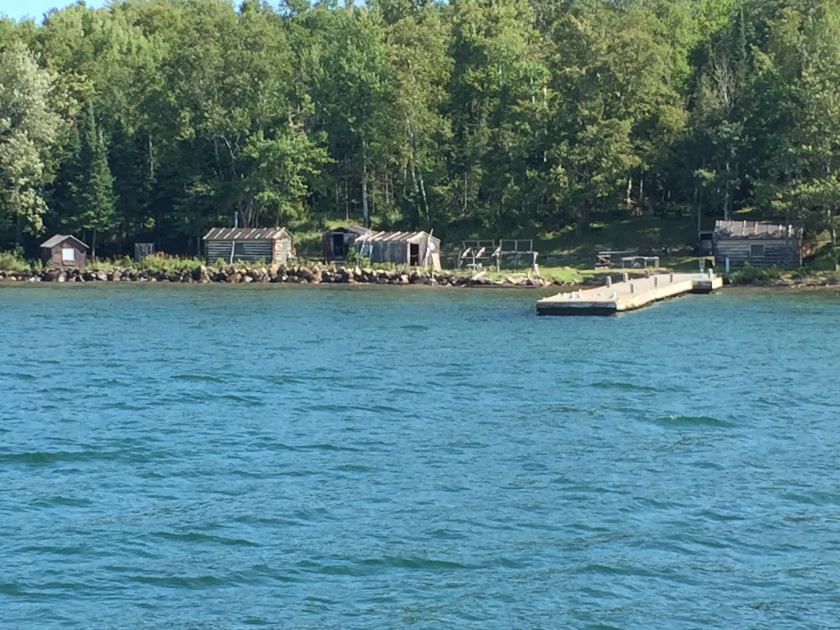 It was a nice day on the lake.  There was ice cream when we got back to Bayfield and then spaghetti for all for supper.

A nice place to visit.  Way more to do than we had time for.  So we will go back.