We took a short drive up the North Shore from Duluth to visit Gooseberry Falls State Park. this is one of Susan and my favorite State Parks.  There is a nice campground (with no hookups), great hiking trails, access to Lake Superior, a nice visitor’s center with a gift shop and of course the falls.

The Visitor’s Center is a welcoming place, open all year.  On the other side trails lead down towards the Falls, the Bridge over Highway 61 and to the handiwork of the many CCC workers who worked here for many years. 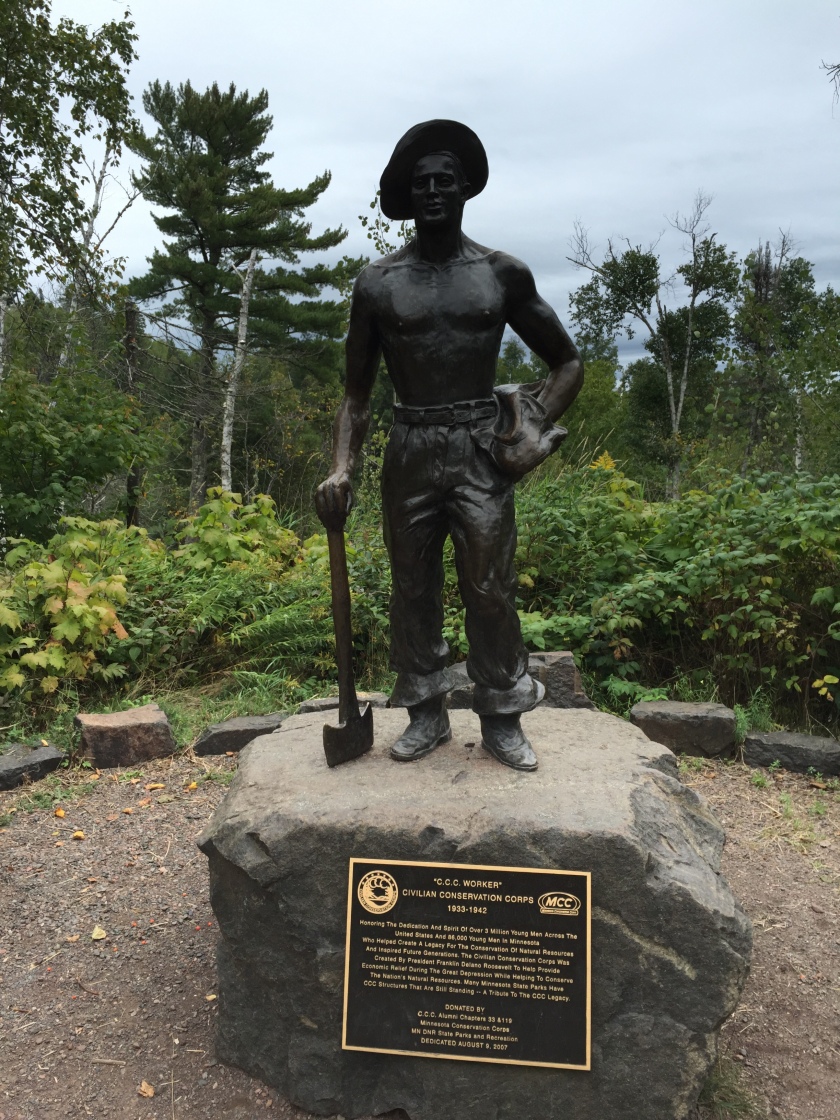 The Upper Falls are inland from the bridge. 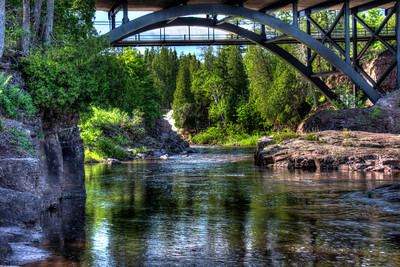 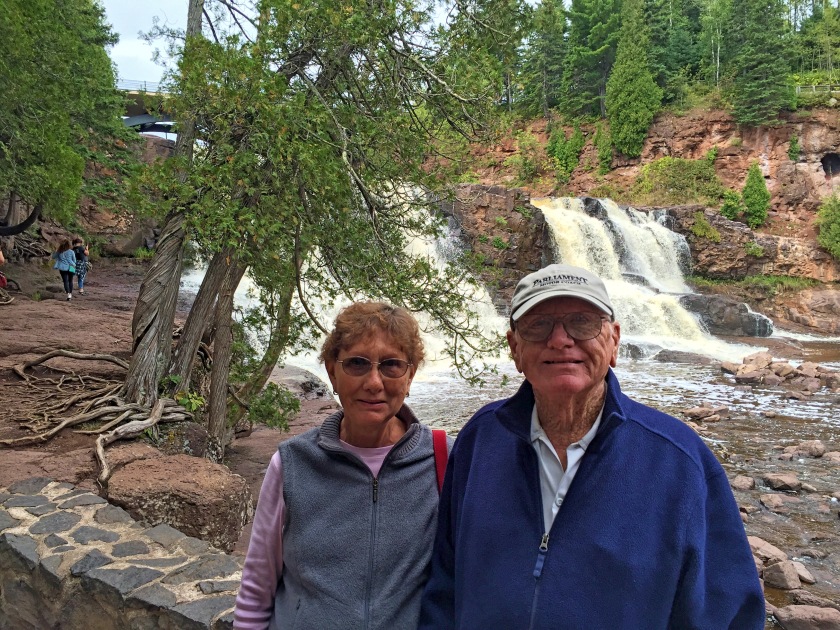 Here we are. A very familiar place for us.

The Middle Falls of the Gooseberry River spills out onto a flat rocky area that is a favorite place for kids to run around on. The river then goes over the Lower Falls and the river winds through a wide valley towards Lake Superior. 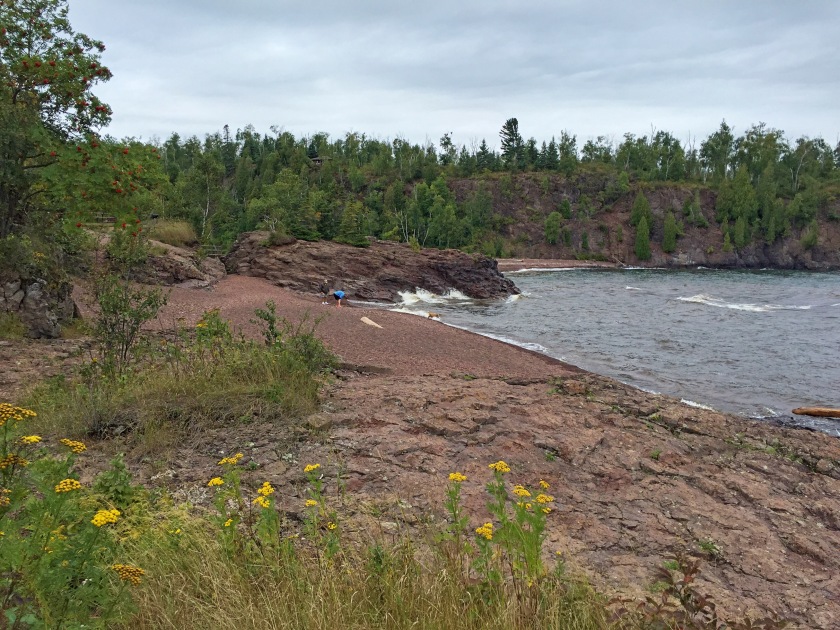 The mouth of the river is just beyond the rock outcrop. Beaches on the North Shore are gravel to rocks. 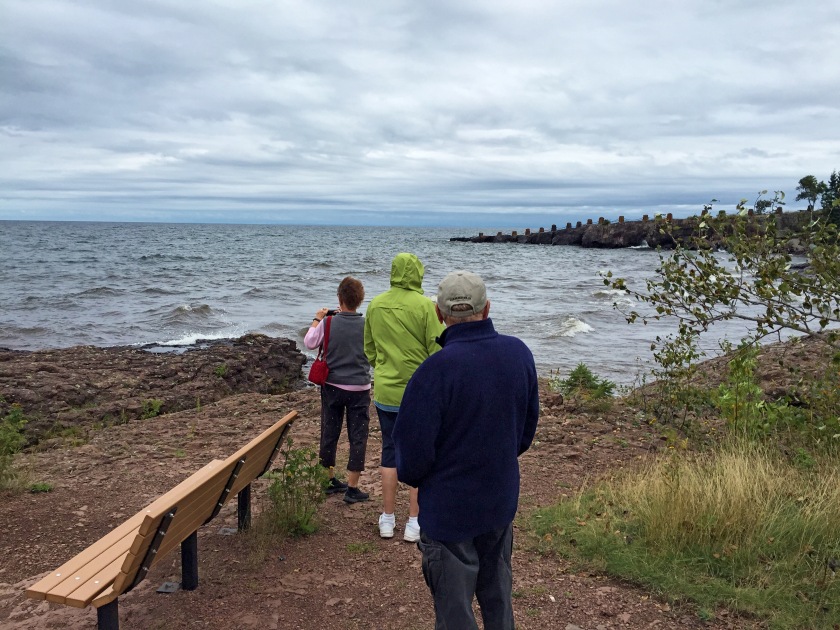 The slope across the water is from ancient lava flows that make up most of the North Shore. The CCC built stone columns along the edge.  These were about four feet square and four feet high. They strung ship’s anchor chain between them as a fence.  Out on the flat sloping lava flow they built picnic tables. Susan and I have been up here when storms drive giant waves crashing most of the way up the rock shelf.

The campground is down by the lake as are several picnic areas.  Some have CCC built shelters.

I came up here in the early 1970’s in the middle of the winter with several young Boy Scouts in tow.  It was minus 30 degrees or so, really, and we figured we could stay in the stone buildings, start a fire and be nice and toasty.  Well there wasn’t much wood around for a big never-ending fire and after a day we abandoned the building for tents. It was colder in the building than it was outside.  We survived!

On our way back to Duluth we stopped at the Rustic Inn for a nice lunch.

That brings us to the end of this epic exploration of the South Shore (and a sneak up the North Shore).  We had a very nice time travelling with Rudy and Carolyn and Amanda and Douglas. It was a new experience for all of us to travel in a group. I think it worked pretty well.

Susan and I and Rudy and Carolyn left the Lakehead Basin Marina and RV Park on Friday.  We had a four-hour drive. Rudy and Carolyn had a few days to get to Houston. It actually took them almost two weeks with a stop in Nacogdoches for some service work and a delay waiting for parts. Rudy reports all is running perfectly now.

Douglas and Amanda have been going to several local weekend and week-long festivals where there sell the handmade jewelery that Amanda makes.  So they are very busy.

We will be home for a couple of weeks and then back up to the Temperance River on the North Shore in October.