A correction to the last post … McDowell Regional Park is east of Fountain Hills.

Taliesin West is Frank Lloyd Wright’s winter home for himself and for his architecture school. The original Taliesin in Spring Green, WI is the summer home.  Everyone wanted to know what Taliesin meant.  From his Scottish heritage, Taliesin referred to the brow of the hill. And that fit Wright’s idea of an elevated location for the view without being too high to change the natural landscape.

In 1937 Wright came out to the Phoenix area on the advise of his doctors, sound familiar?  He found this area on the west side of McDowell Mountain and started buying land, 650 acres for an average price of only $3.50 per acre.   He was attracted to the site because there was room, ample  natural building material on hand and it was cheap. It remained his winter home until he died in 1959 at the age of 91.  Building on the site began in 1939 and continued until 1954. The school, both in Spring Green and here continues to educate architects.

Part of their education in the first years of Taliesen West was to do the hard work of building the buildings.  Water had to be hauled in from 8 miles away.  It was nearly 40 miles to the Phoenix Airport.  Wright was a fancier of cars, red cars and usually drove himself from Wisconsin to Arizona.  The buildings took shape from the local rocks which naturally had a flat face, concrete, steel and redwood.  They followed Wright’s concepts of using natural materials, avoiding rectangular shapes, allowing natural light to penetrate to the interior and making spaces more human scale.  Wright was only 5′-8″ tall so many of his doorways seem short and entry areas have low ceilings which expand to rooms with higher ceilings.

The entire layout of the campus resembled a ship in an abstract way.  In this Lego version the prow of the ship is at the end of the  triangular green lawn area.  Some imagination is required, maybe squinting helps. 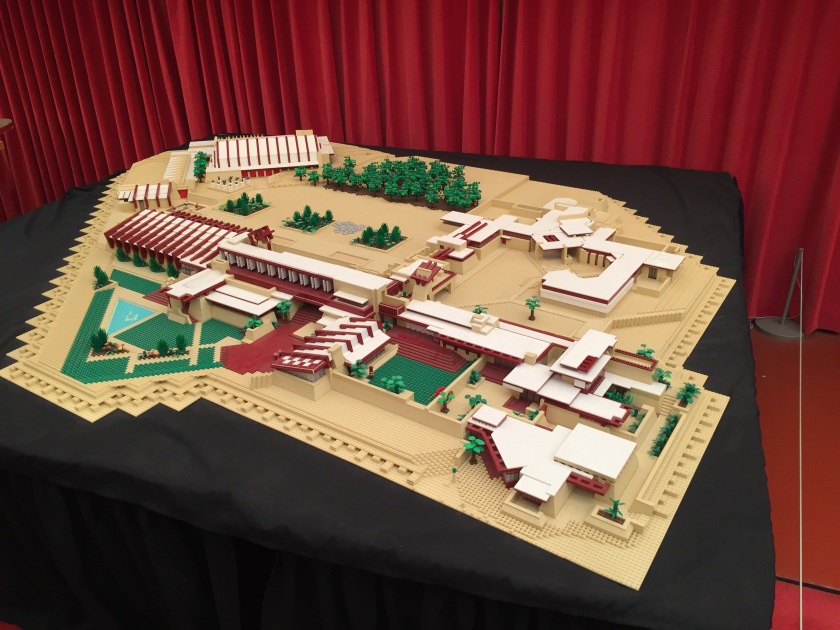 There were several pools of water both as a design element and as a means to fight any possible fires.  There was no nearby fire department or water supply. 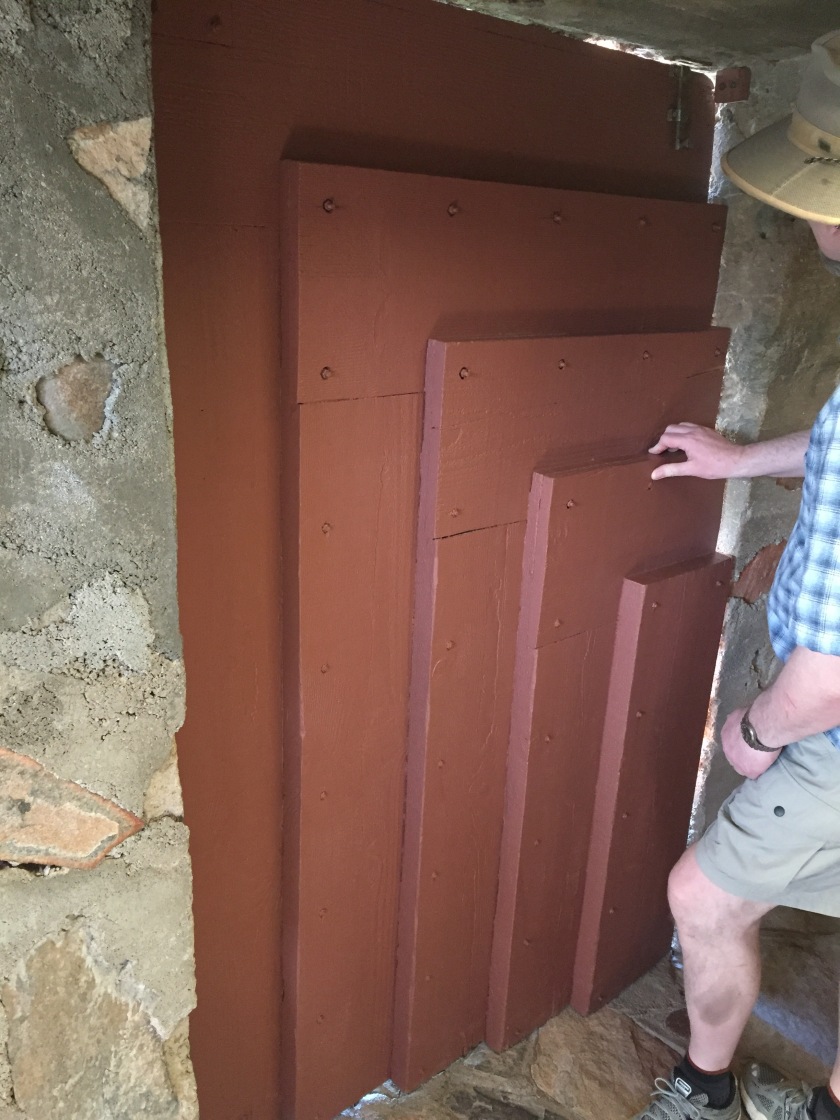 There wasn’t a square corner anywhere. 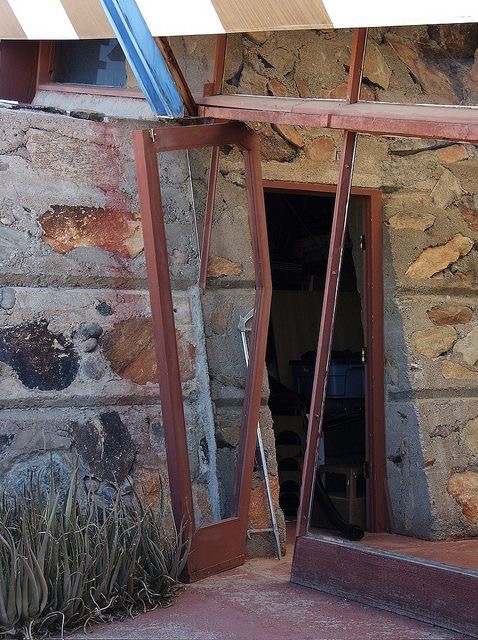 The living room was like a crumpled box.  Every roof leaked so they ended up adding gutters to all of the beams to channel water to the outside. Now they point that out and proclaim all of the dribbling drains to be water features.  We sat in these chairs.  They were designed for short people.

Everything is very purposefully designed and quite stunning.  The entire campus on its own is a work of art.  Here you can see how the flat faced rocks were placed in wooden forms that were then filled with concrete.  When the forms were removed the flat faces became part of the surface. I am sure every rock was chosen for its location with great care.   You can also see V shaped grooves in the walls. These were made with wooden strips in the forms.  They add another layer of surface and shadow lines, breaking up the flat surfaces. And there are Asian influences in many views.

And art and sculpture.  Orchards and gardens provide much of the food stock used by the kitchen.

And considerable Native American influence as well, all merged into one.

The ninety minute docent led tour was very well done.  It was a reasonably sized group, easy to hear and the flow and organization of the information made it easy to follow and connect facts.

And of course, there was a Gift Shop.  I bought some bronze house numbers for the Hastings house.  Susan got a FLW influenced iPhone cover, something in his wildest dreams he never would have imagined.

It was an interesting day.  We have been to the Spring Green site and this completed that. In many ways this was more interesting.