We got up and got going in the morning at Lava Mountain. Up over Togwotee pass to Moran, WY and then south towards Gros Ventre. We were there by 10 AM. There was a spot for us, turned out it was a very nice spot. We got all checked in and looped around to get fresh water and disconnect the Jeep. And then a parade of 20 motorhomes drove in, an organized tour from Florida. The Wagon Master had them all go down to the amphitheater parking area while he worked with the campground folks to find spots for all of them. Later I asked the person in the campground registration office how that worked and she said they knew they were coming but just like every one else it was first come first served on a space available basis. Gros Ventre is quite large and in the morning, mid-week, space is almost always available. We were glad to get in before them though, we liked our spot.

We stayed here for five days. On one of those days we had to pick up a package at the UPS Store in Jackson so we combined that with a laundry event, got our spare LP tank filled, got the Jeep washed, did grocery shopping and had lunch at a Guy Fieri Diners, Drive-Ins and Dives recommended spot. Good. We were trying to connect with friends who work (volunteer) at the National Elk Refuge each summer. It was a busy time for them so we missed them. 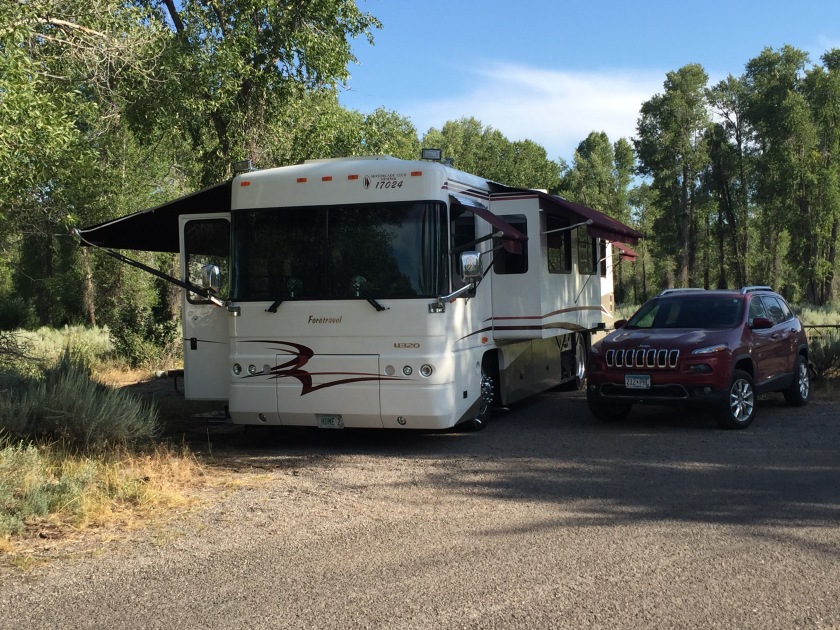 Our new solar panels got a good test here as well. Our site had early morning and later afternoon shade and good sun during the day. Every day we generated more power from he sun than we used, most days by a long way. We normally used about 2,300 watts. We were generating more than 4,000 watts every day. One day we generated more than 5,200 watts. At one point 720 watts or about 50 amps going into the batteries. These were pretty much perfect conditions. Clouds and shade will change these results.

We walked down to the Gros Ventre River after supper one evening. We could hear it most of the time. We saw folks walking that way with fishing gear everyday. It was close, less than 1/4 mile. There was a family with two young kids there. They were from France. The kids were busy building a rock wall in the shallows along the edge of the river. There is no sand, just rocks. 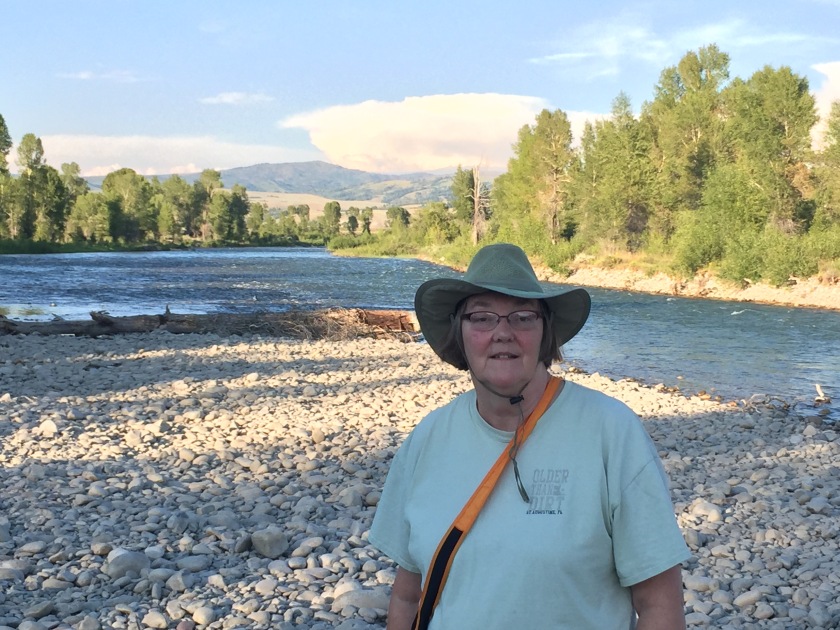 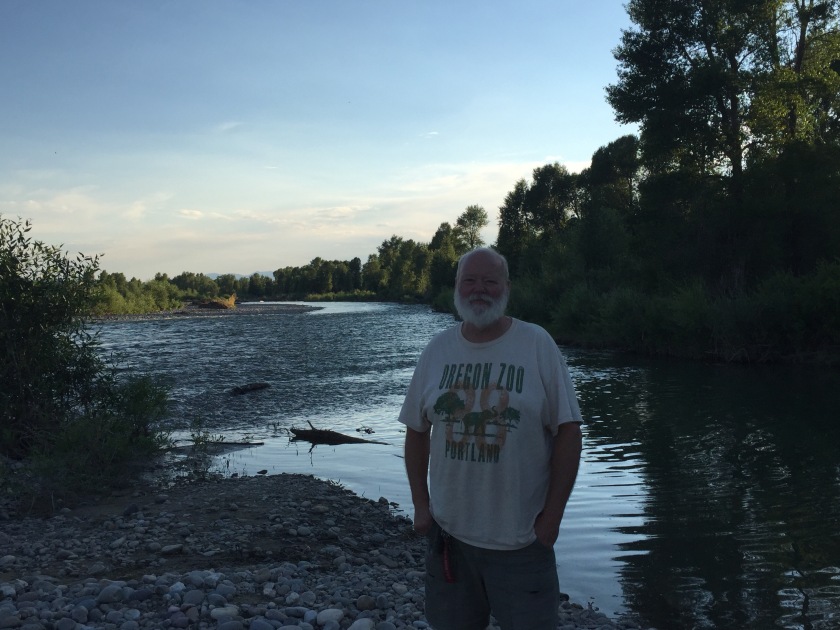 Many people want to know if we were from Portland. No, they just had end of the season shirts on sale.

This summer it seems we have seen many more people from a variety of European countries in the parks traveling in RVs. Some are rentals but many are from Europe with French or German or other license plates. We saw the same folks we saw in Zion this spring here in the Tetons. 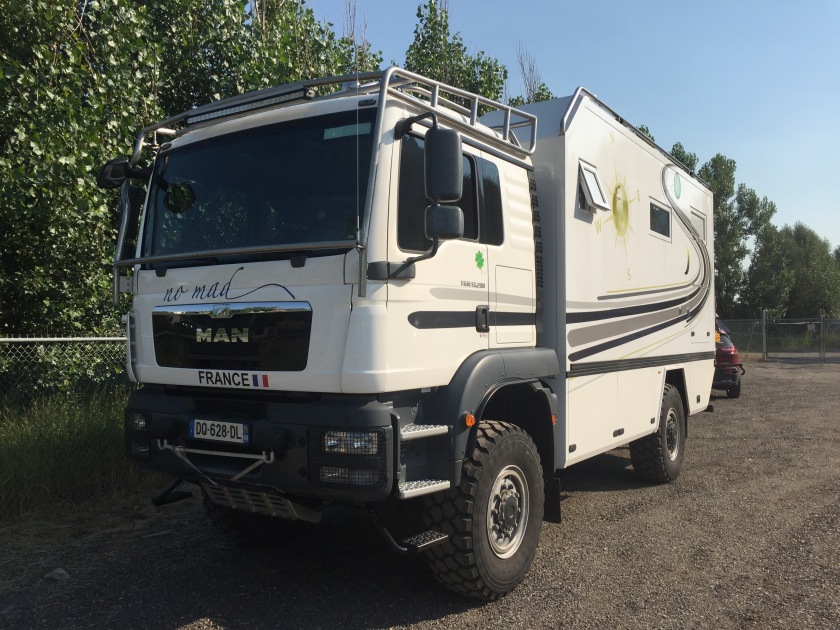 Big huge things, giant tires, very tall. Winches on both ends. I guess they came over here thinking they were going to just drive off road across the county. Almost any off road track that we see would be a tight fit for these. We saw this one three times and two others of this type, different colors. 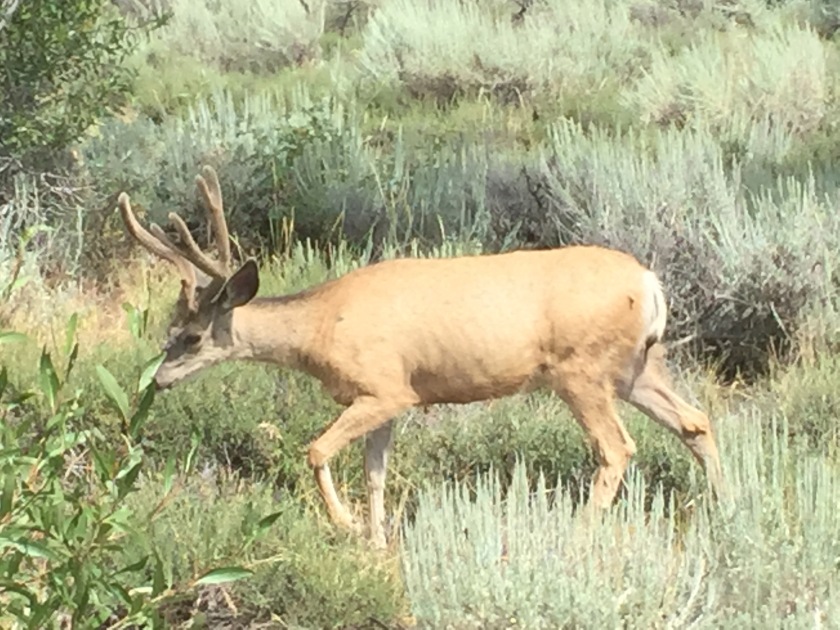 It is fairly common to see a moose or an elk in Gros Ventre. And mule deer as well. We were sitting in the afternoon sun and this one wandered towards us, never giving us a second look. He was maybe 10 feet away.

A Hike at Jenny Lake

We stayed at Jenny Lake in 1980 in the original Home2, smaller RVs were OK then. It is tents only now. No reservations and the campground is usually full by mid-morning. It is a popular place, close to Jackson, a nice lake where you can rent canoes or kayaks. When I was there in 1974 you could rent small motorboats. I did and went almost to the other side of the lake where a full scale forest fire was underway. Not much going on to stop it at that time.

Now, if you want a parking spot in the parking lots you need to be there by 8:30 or 9 in the morning. There are several hikes that start in Cascade Canyon on the other side of the lake and a couple hikes around the lake. These are among a very few hiking trails in the mountains. Most of the others are south of here, almost none to the north.

To get to the other side there are shuttle boats that go back and forth. Eight round trips an hour normally, more with more boats when it is busy which starts about 10 when there is quite a line waiting for the boat ride. Each boat holds about 40 people. One boat arrives at the Cascade Canyon landing every 7.5 minutes, they all get off, return folks get on and back and forth they go until 7PM.

We were there by 8ish, walked to the docks, bought one way tickets – $9 for the 10 minute ride – planning on hiking back and got on the boat without waiting in line. By 9 AM we were in Cascade Canyon heading for Hidden Falls. Not too far but up hill. 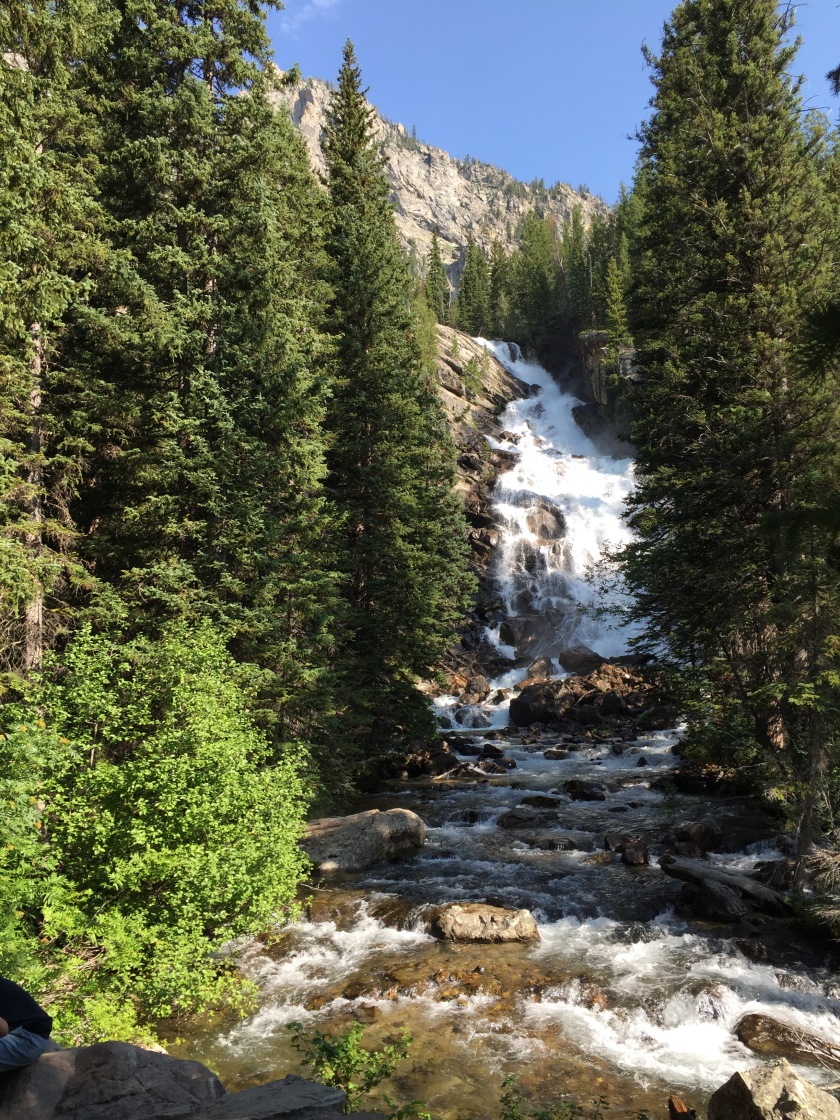 It is a lovely falls and an active river downstream. It is hard to describe just how beautiful it is here. Everything about it. For us this is a much more inviting place than Yellowstone.

There is a very nice 2-1/2 mile trail around the lakeshore that was where we were going to hike. We heard it was closed for renovation but the hillside trail was open. Susan was looking at the lakeside trail thinking it would have been nice. 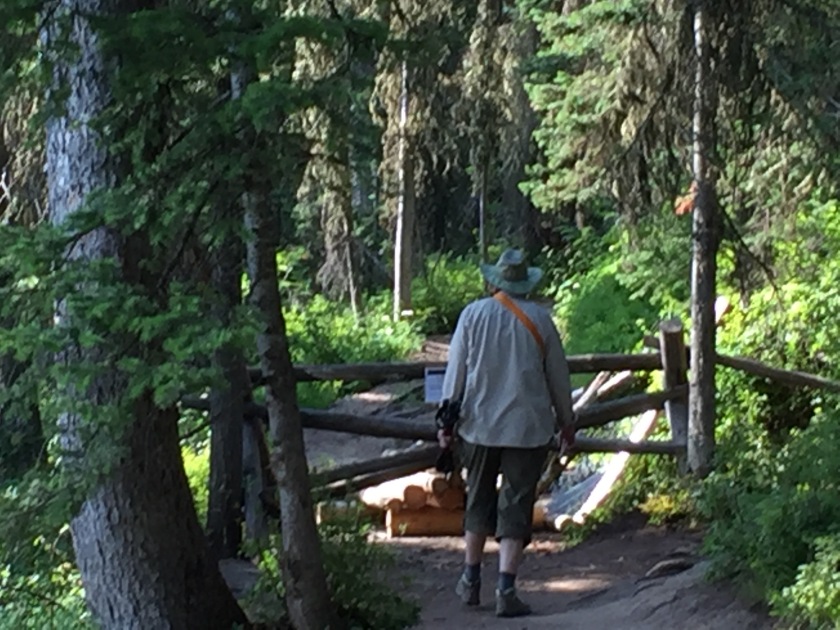 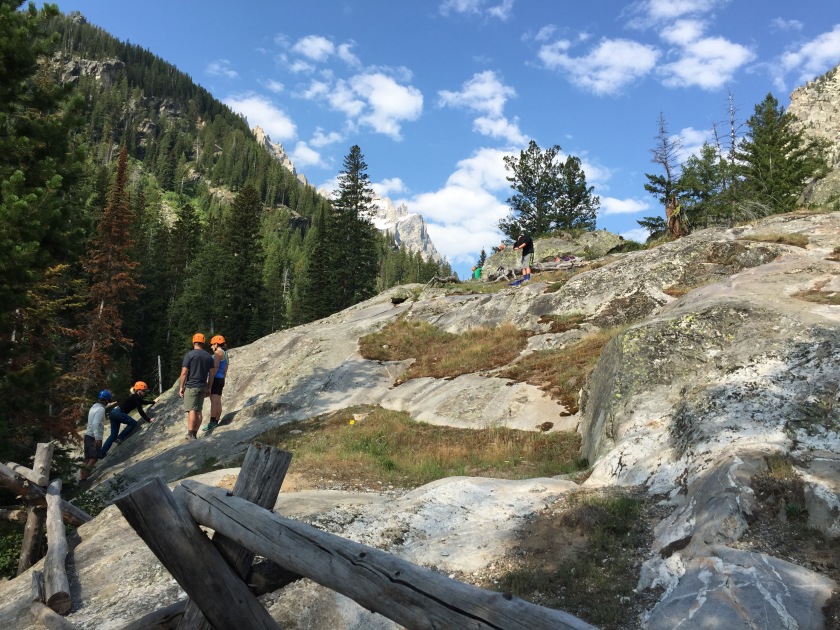 One of the highlights of the Tetons for many is the technical climbing opportunities. There is a climbing school and ranch here and everyday there are many mountain climbing hopefuls trying out new techniques hoping to turn them into skills. It was fun to watch. Almost every day there are climbers working their way to the summits. More than 13,000 ft to the top of the Grand Teton. 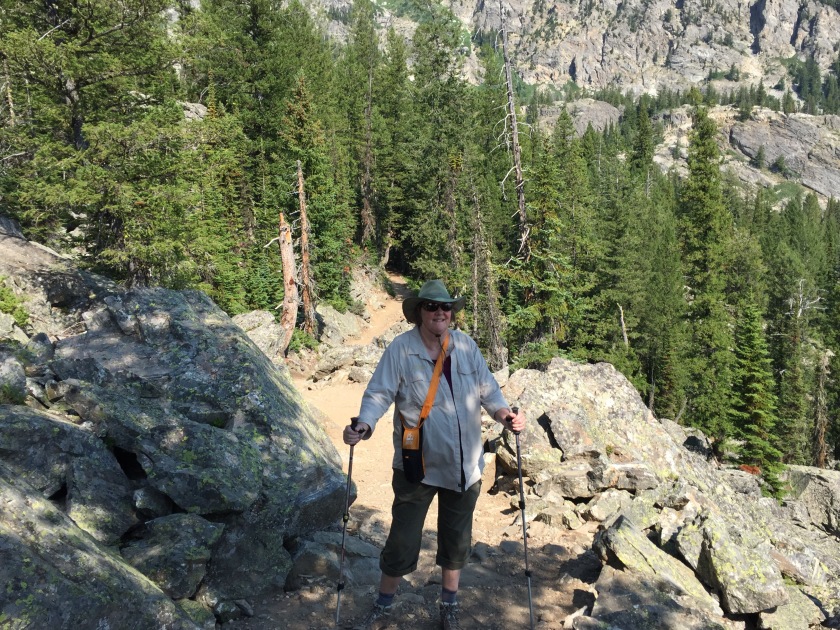 Of course the hill side trail was actually mountain side and way up on the mountain. Several hundred feet above the lake. Our phones track this sort of stuff and they said closer to 4 miles and thirty flights of stairs. 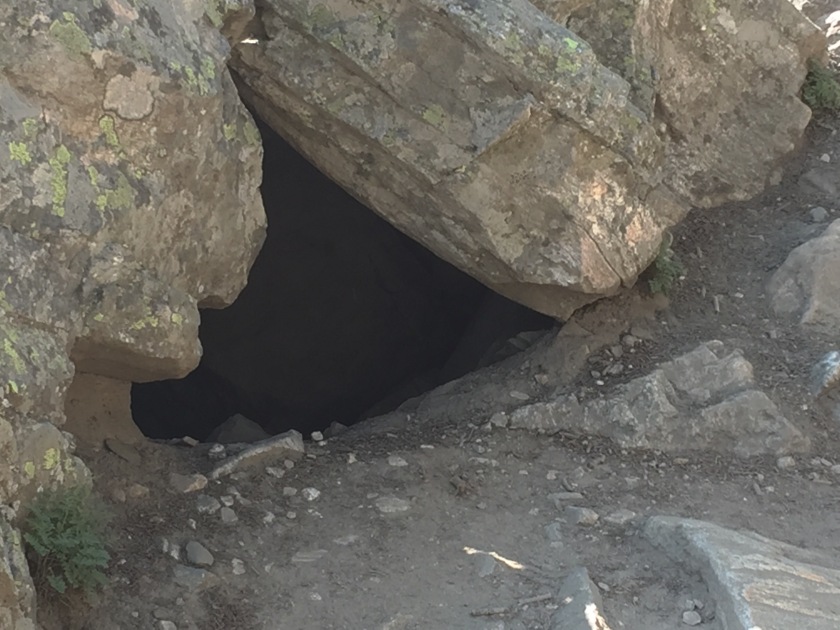 I am sure this was a bear's den. 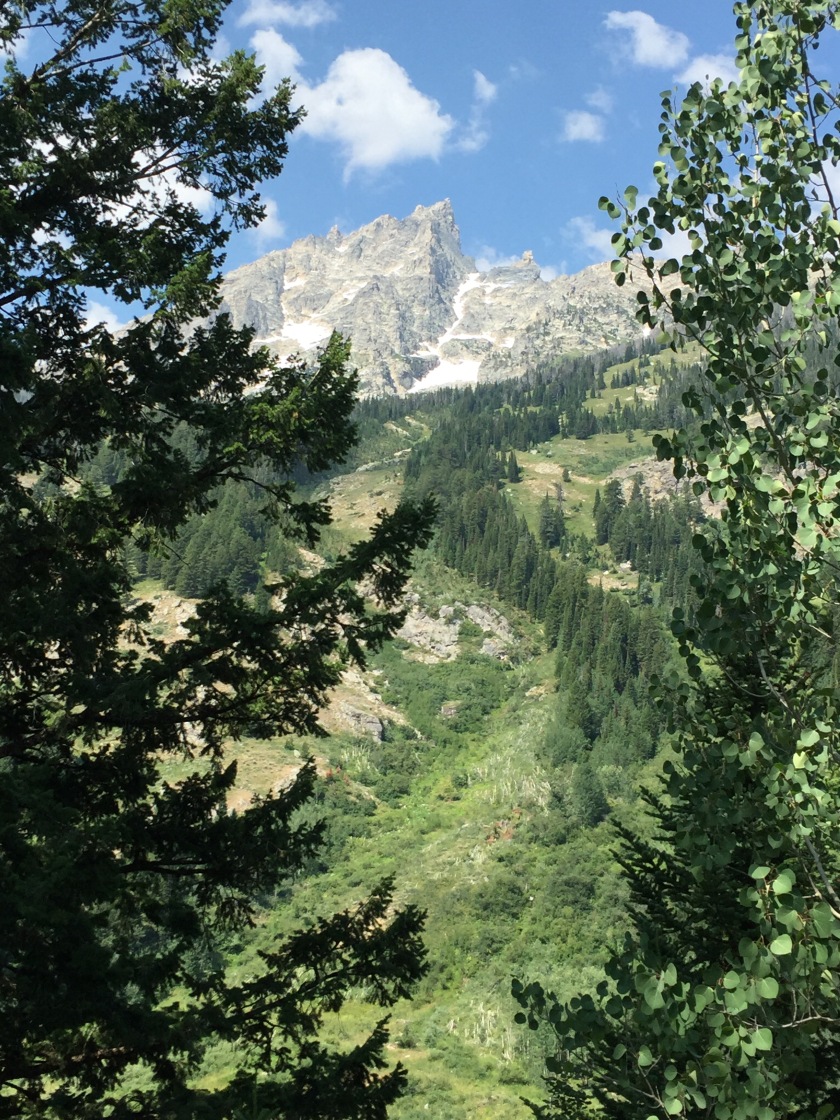 And even though it was not a nice lakeside stroll, we were very close to the Grand Teton, Grand indeed. We saw another small lake and looked for moose or bears. The only wildlife we saw were other hikers. We bought and brought bear spray. At best we figured we might avoid a bear encounter. If not we have some serious mosquito spray as a souvenir.

So a few hours later, no bears but a bit worn out we got an ice cream treat at the Jenny Lake Store.