Two years ago while we were at Colter Bay in the Tetons, we drove up to Yellowstone on two different days. These ended up being all day drives, maybe 150 miles each and ten hours or more. (This might have been the beginning of thinking about a different toad) Yellowstone is huge, most of the junctions are 30 to 40 miles apart. We saw most of the tourist things in the southern half of the park but didn’t get up to Mammoth Hot Springs or Tower. We checked out every campground we went by where there were no restrictive length limits. Madison Campground on the west side was the nicest of the ones we saw. It is on the Madison River, prime fishing. There are no lodges, no grocery stores, no laundry, no gift shops, no gas stations and no places where tour busses stop. Just campers and fishing people. Perfect. $13.17 per night with our geezer pass. You can get reservations at this campground, in fact you must. It was full every day for the week we were there. No electric, water or waste hookups. We were on our own. Generators are OK from 8AM to 8PM. We have 105 gallons of water capacity and 165 gallons of waste capacity so with full water and empty waste tanks we are good for 10 days or more. And 900 watts of solar panels on the roof.

We left Gros Ventre and headed north through Grand Teton NP towards the southern entrance to Yellowstone. It is about 45 miles to the northern end of the Tetons, then about 10-12 miles along the John D Rockefeller Jr. Memorial Parkway to Yellowstone. 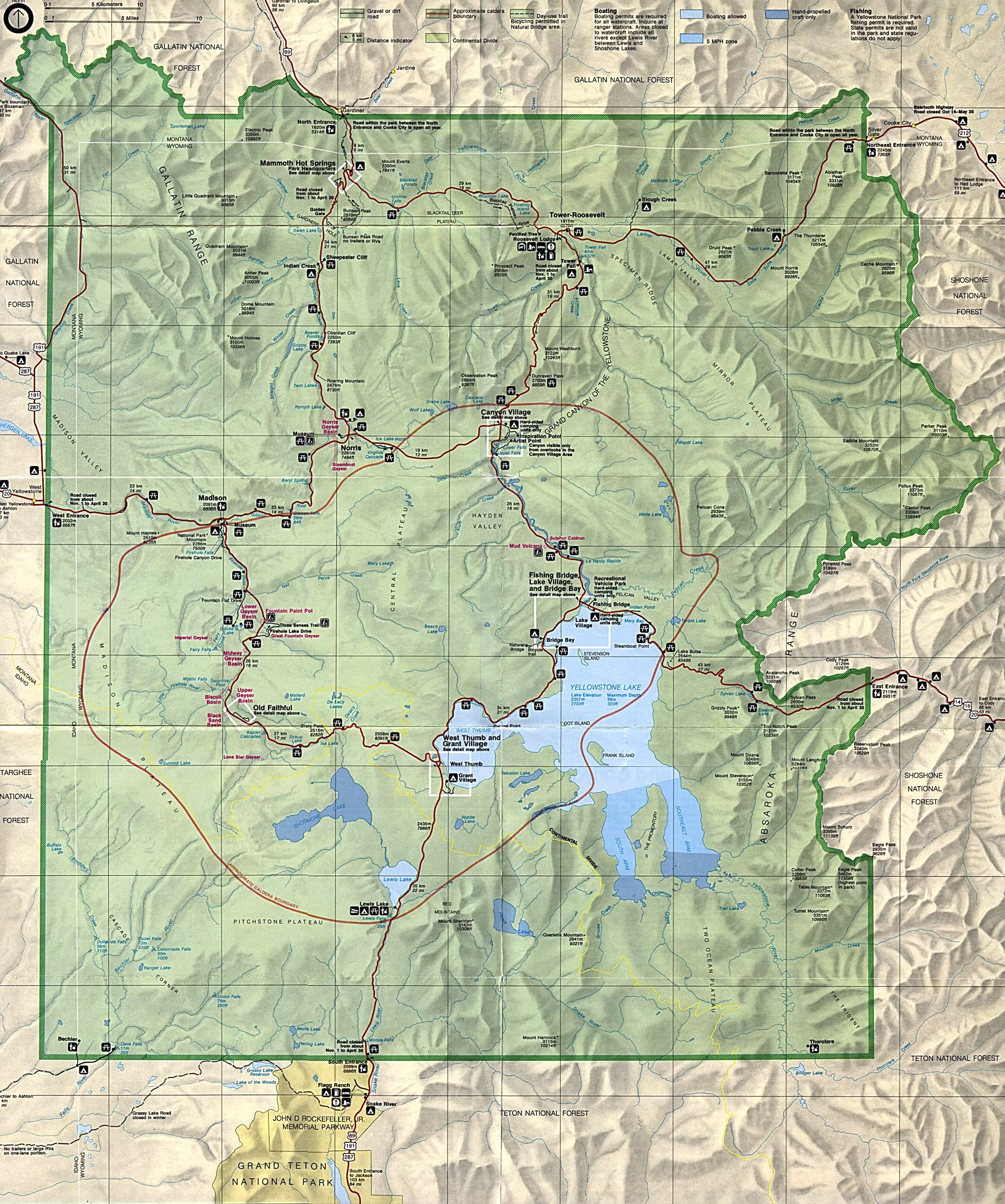 The road around the western side of Yellowstone goes by Lewis Lake and a very nice campground for smaller RVs and tents. Then it goes by the west end of Yellowstone Lake (The West Thumb) and on past Old Faithful. If you want to see crowds be sure to stop here. And then on to Madison. On the way we went over one pass and crossed the Continental Divide three times and followed the Firehole Canyon down to Madison. 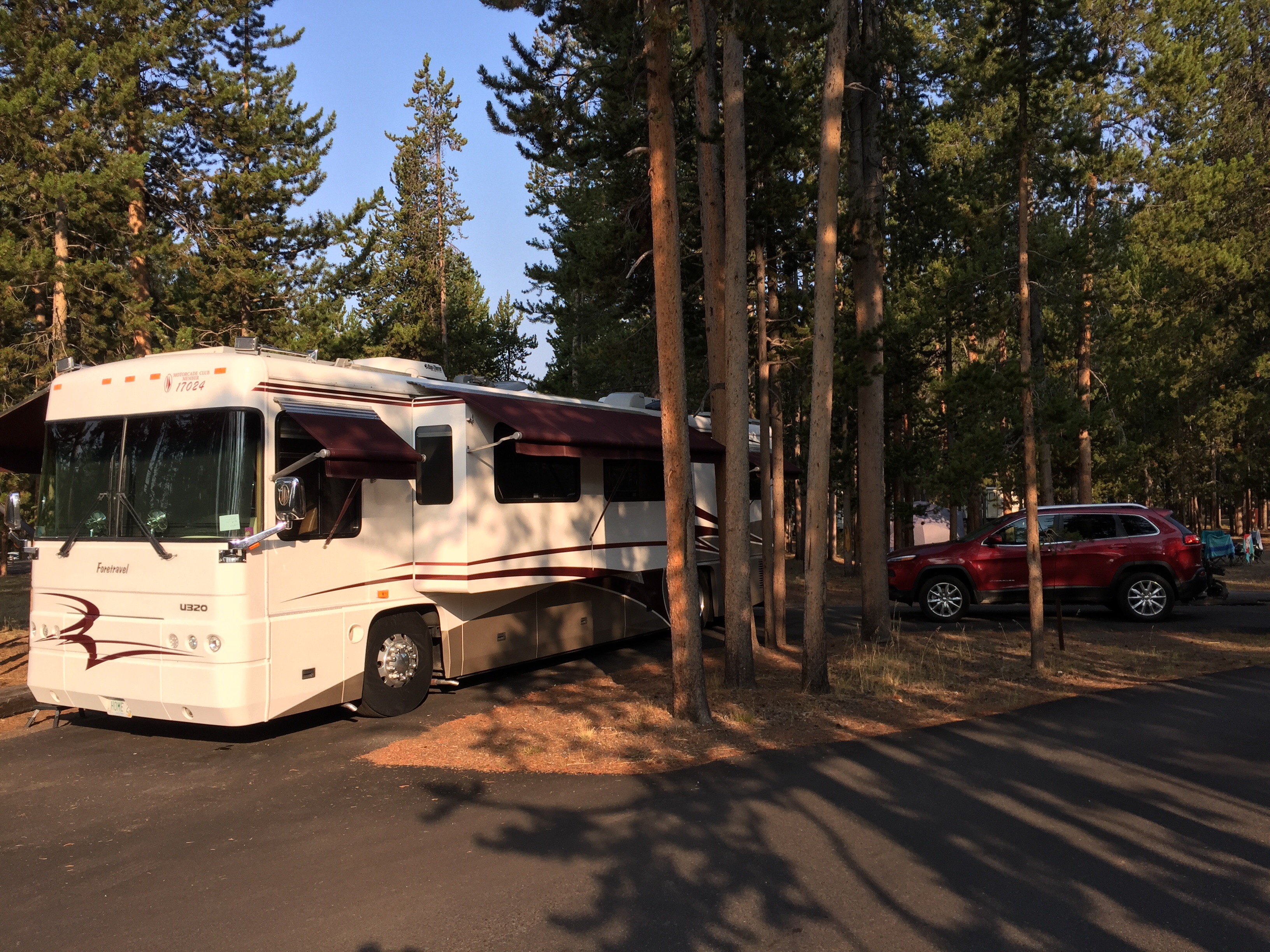 When you make reservations at Madison you have to tell them how long everything is when it is all connected. The coach plus the tow bar plus the length of the toad. Many of the campgrounds have these side loop pull through sites. They are sort of along side of the main one way drive through the campground. There are still plenty of shorter back in sites and some of the side loops that are much shorter. But there are many sites here big enough for 45′ coaches and many more big enough for us.

There was quite a bit of open space on the other side of the coach so we felt quite uncrowded.

The Madison River is just down the hill surrounded by a wide grassy area. Early morning visitors (people and animals) include elk and deer, lots of geese, an occasional swan. I looked carefully on the other side of the river at the edge of the trees for a bear but never saw one. 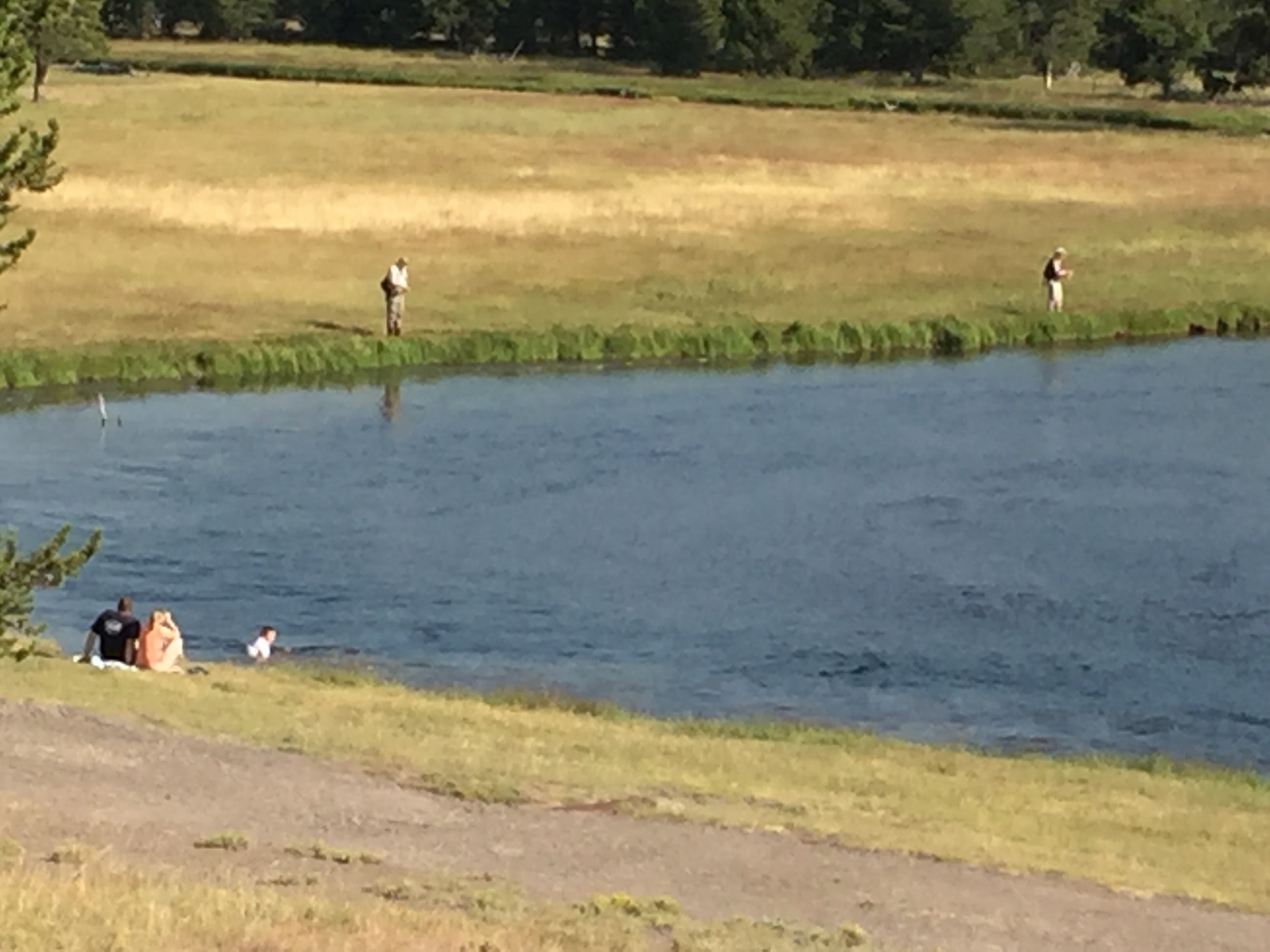 The fishing people are out most of the day. Where they are changes during the day depending on where the sun is. In the warmest part of the day they are on the east side of this part of the river’s curve. The water is pretty cold but it doesn’t stop many people from going in for a dip or at least a wade especially in the later afternoon. There are small areas of sand along the side but the river is mostly a rocky bottom. 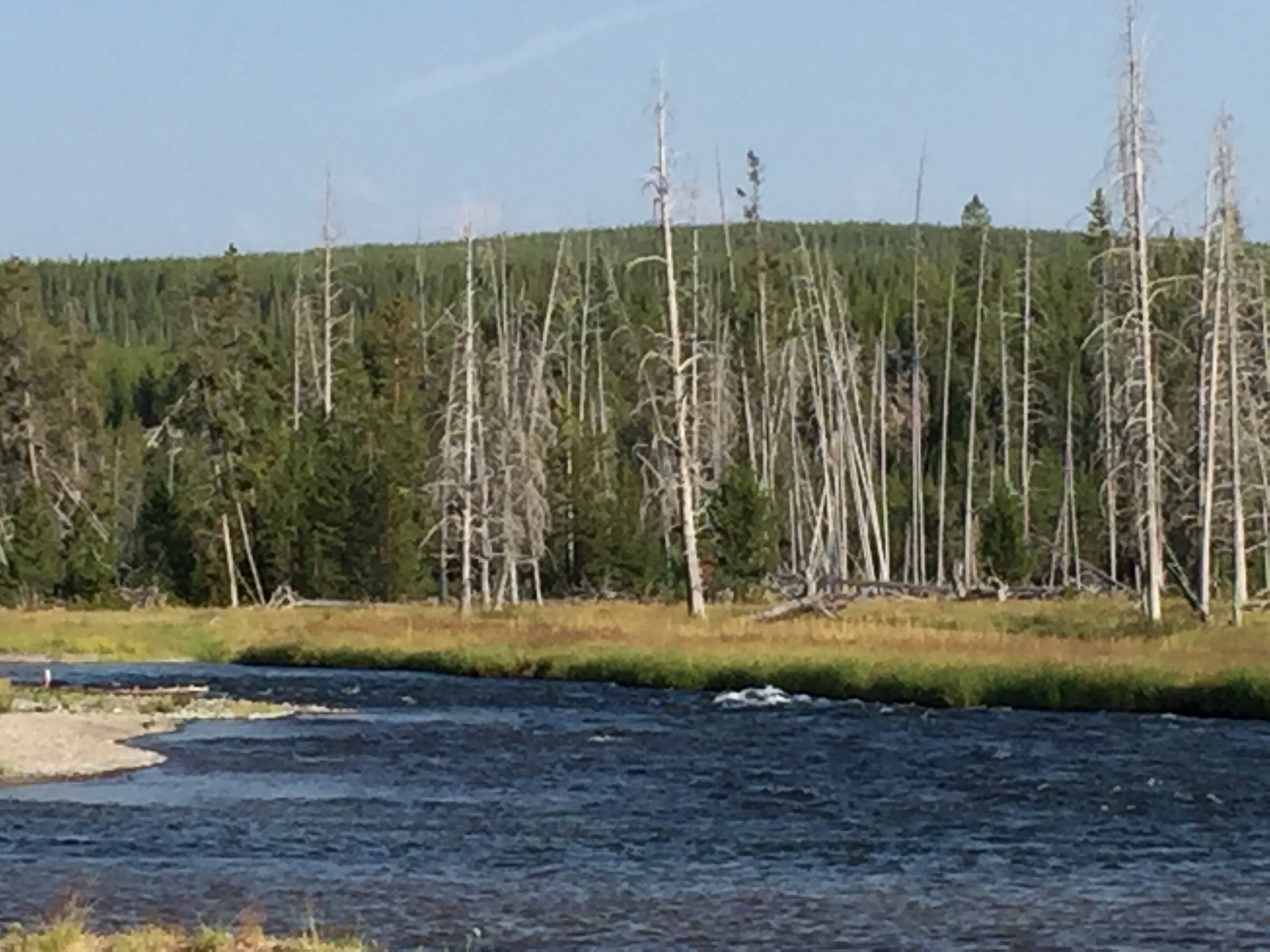 The river changes at every turn. Small and bigger islands emerge, channels split off and merge again a bit downstream. The meadows spread wide and then disappear. The tree line gets much closer and then retreats.

In 1988 there was a huge fire in Yellowstone, almost 300,000 acres were burned. It is quite amazing how much has recovered and regrown. And now a new attack is apparent. The pine beetle is killing trees at an alarming rate. It is not that this is an outside invasion, the beetles have been here all along and they have been killing trees for a very long time. But only a few and scattered here and there, mostly older trees. But every winter the very cold temps in Yellowstone killed off most of the beetles keeping them and the damage they do in check. And even though it is still cold in the winter it is warming and many more beetles are managing to survive. Then they reproduce and in the summer there are now vastly more beetles and more damage. Instead of a hillside of burned trees the mountain sides are now covered with pine trees, dead or dying, covered with red needles waiting to drop. And all the more ready for another fire.

Since the beetles are native, there is almost nothing being done to mitigate this problem. It is a natural event. What will be replacing the pine trees will be aspen trees which do better in a slightly warmer environment. Just as Yellowstone looked much different after the 1988 fire and then recovered thirty years later it will look different again in another thirty years.

We drove into West Yellowstone one morning for a look-see. It is fourteen miles west of Madison. There was a couple mile backup of traffic heading west due to an elk and calves along the side of the road. We went by a trailhead to Harlequin Lake a couple miles up in the mountains. It was one of the destinations on our list of things to do. As we got closer to West Yellowstone, the western entrance to the park, we could see three or four lanes of traffic backed up at the entrance station and backed up all the way through town. No left turns. We found a place to park and walked around for a while. Lots and lots of motels and resorts. There are a couple large RV parks. They were nice, paved, curbs, watered grass and a few trees. And $70 or more per night. And then an hour more wait to get into the park in the morning. Not what we wanted.

We drove about five miles north of West Yellowstone to Bakers Hole Campground, a Forest Service campground, with about 75 camp site, 30 with electric hookups. It was nice, first come first served, but late in the morning it was not full.

We had a nice breakfast, went to a grocery store and headed back. By noon the long lines entering the park were gone. And on the way back the elk and calves were still there but no gawkers.

Harlequin Lake is a couple miles in from the trailhead just a few miles west of Madison. The trail looks to be a well used one and rises through areas of new growth trees. This area was burned in 1988 so these trees are almost thirty years old and many were less than 10 ft tall. And these trees were growing up through the long dead fallen trees from 1988. This fire burned through most areas quickly, enough to kill the trees but in most areas not hot enough or long enough to actually burn the trees down. The scorched, still standing dead trees are left to fall as they might under the winter snows or a strong wind. 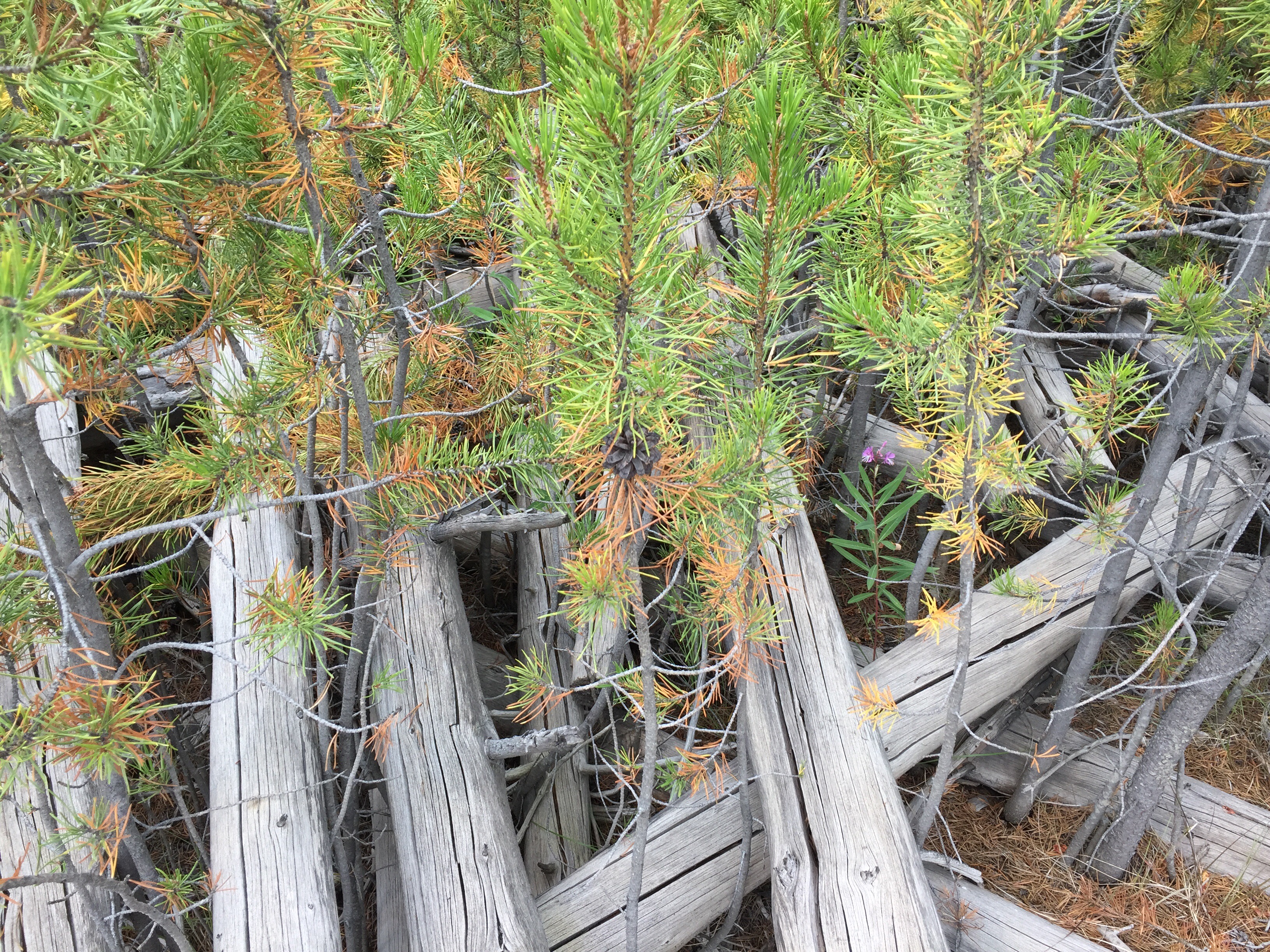 There were several layers of trees fallen every which way. More fuel for another fire. An impenetrable trap for wildlife. But still new trees were coming up through every space possible. 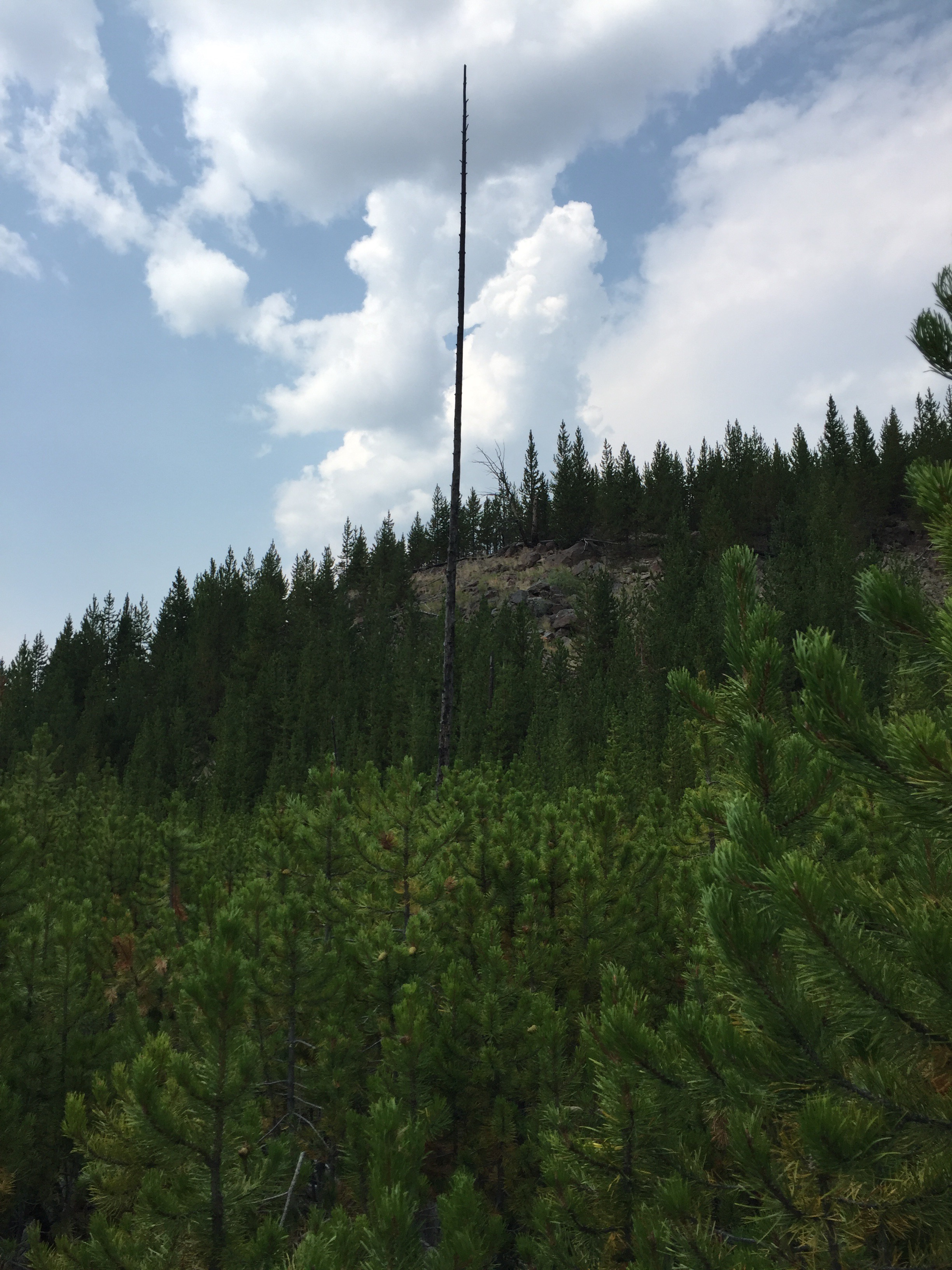 On this hillside heading for the lake a sole surviving fire remnant stood. You can see how big the trees must have been. Most of this old forest was mature, maybe 80-100 years old. Now a new forest will grow up and much of it reaching maturity about the same time. Fire is a natural part of the ecological cycle here. Fires that threaten structures or visitor centers or natural sites are constrained but a natural fire is let go. It seems harsh to a visitor but it is the natural order of things.

We made it to Harlequin Lake. Not a big lake, evidence of beaver activity all around the shore line but we never saw a beaver or even a hidden beaver lodge. Most of the lake is filled with water lilies which were blooming. These small lakes slowly fill in with the annual remnants of the water lillies – becoming shallower and more muddy bottomed. Eventually they become a marsh and then a meadow. 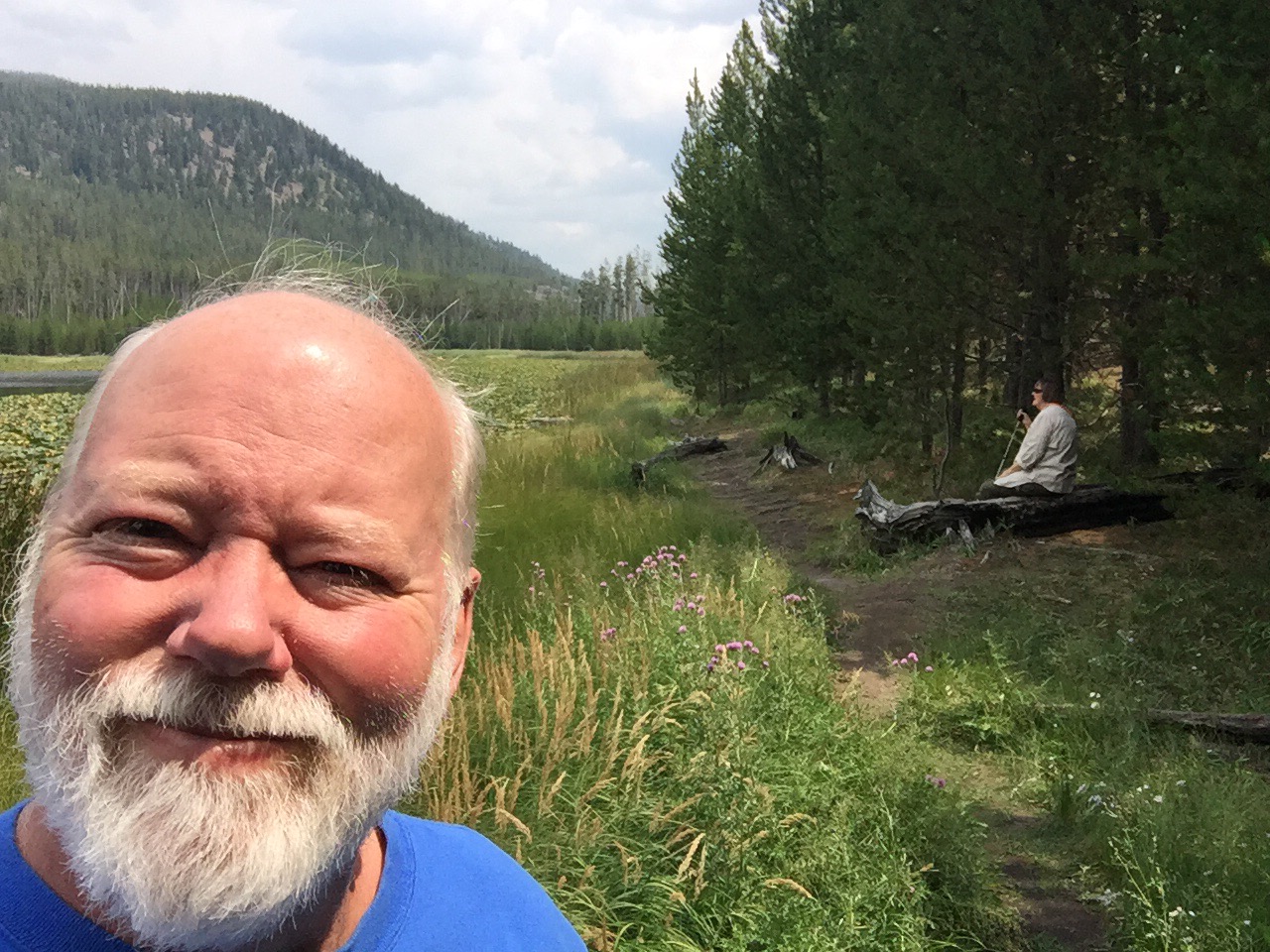 A very pleasant place to sit and watch ducks and geese and birds and almost no one else. Together, the best place to be.