At Norris you can continue on north to Mammoth Hot Springs or go east towards Canyon Village and then north from there to Tower Junction and east into the Lamar Valley. We did both.

Mammoth Hot Springs is at the north end of Yellowstone near Gardiner, Montana. It has a whole hillside of terraced hot springs that flow out making big flat pools of mineral laden water. The edges build up from the minerals and the the water flows over the edges to make another pool below. The last time we were here was in 1980 and it seemed to us that the pools were much more active and colorful than they were this time. I am sure that there are seasonal and year to year variations. These Hot Springs have been here for thousands of years. When the park was first established there were private hotels and bath houses.

There was smoke in the air from fires in Montana. That is Mammoth in the distance. The lodge, park headquarters and the old Fort Yellowstone.

It seemed sort of dried up compared to what we recalled. 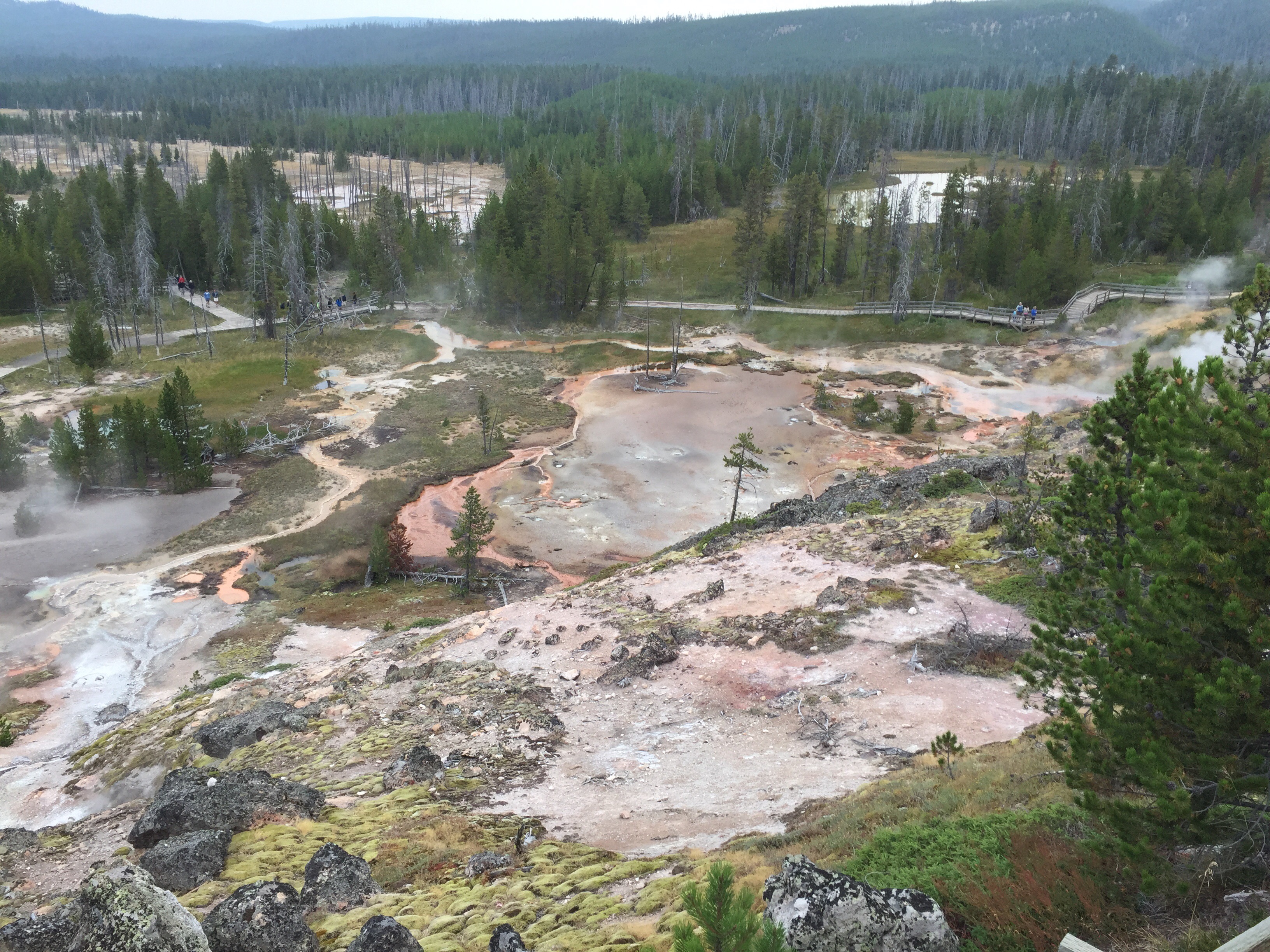 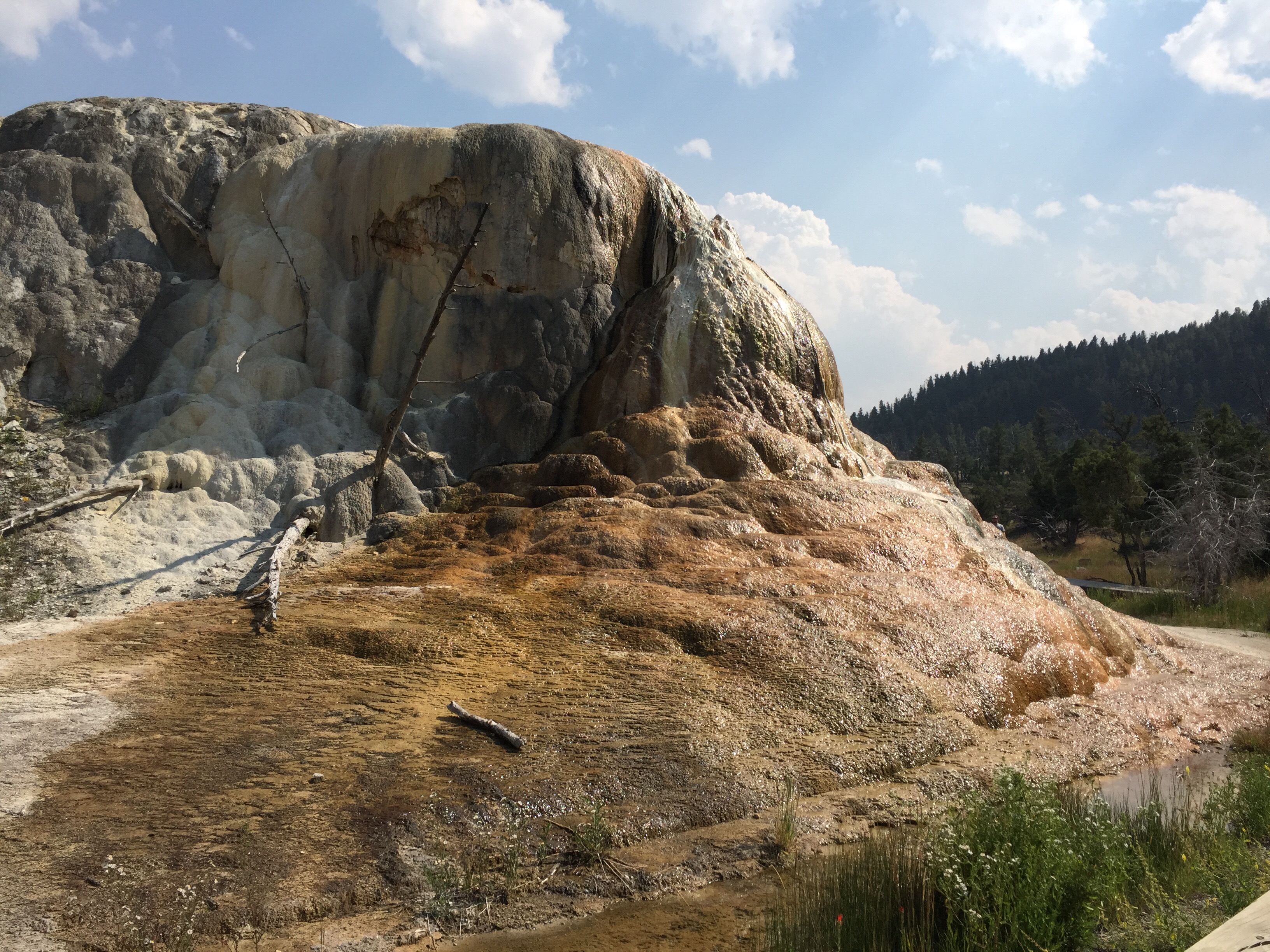 In many places the hot water just bubbled out creating there large mounds with water flowing down the surface.

The Army was the first caretaker of Yellowstone and established a major fort here with calvary barns, hospitals, barracks and headquarter buildings many of these are still here today.

This is an old photo of what the Fort looked like in the early 1900’s. It is still the main manmade feature at Mammoth Hot Springs.

The Officer Quarters are still here and still in use as permanent residences for Park Staff. The Park Headquarters are here and The Park Superintendent lives here as well.

There is a lodge here for visitors and cabins too. And a nice sit down dining room and a cafe. There is a general store that has just about anything including camping supplies and groceries. There is a gas station, a fire and rescue department, a Park Law Enforcement office and a medical clinic. There is a campground and a nearby riding stable. Something for everyone.

When we were here in 1980 the visitors center was also a storehouse of photos and historical documents for Yellowstone. All of this has now been moved to a new archive museum, the Yellowstone Heritage and Research Center just outside the North Entrance in Gardiner.

You can visit here in person or go on-line and see more than 100 years of history.

It was a long drive from Madison to Norris to Mammoth Hot Springs. The road from Norris to Mammoth is being rebuilt. Not just repaved but all new everything. They work over night and the road is closed. During the day traffic gets through but there are several stretches of single lane traffic and delays. We got through OK in the Jeep but I would not have wanted to be one of the many motorhomes, fifth wheels and trailers going that way.

Tower Junction is the other area we did not get to two years ago. Back up to Norris and then west to Canyon Junction and then north towards Tower/Roosevelt Lodge. Canyon Junction is where the Upper Falls of the Yellowstone River cascades into the Grand Canyon of the Yellowstone. It is pretty impressive as are the crowds. The roads to the south rim of the canyon and all of the overlooks there are closed for rehab so it is especially packed on the north rim. Fortunately the road to Tower Junction skirts around all of that. 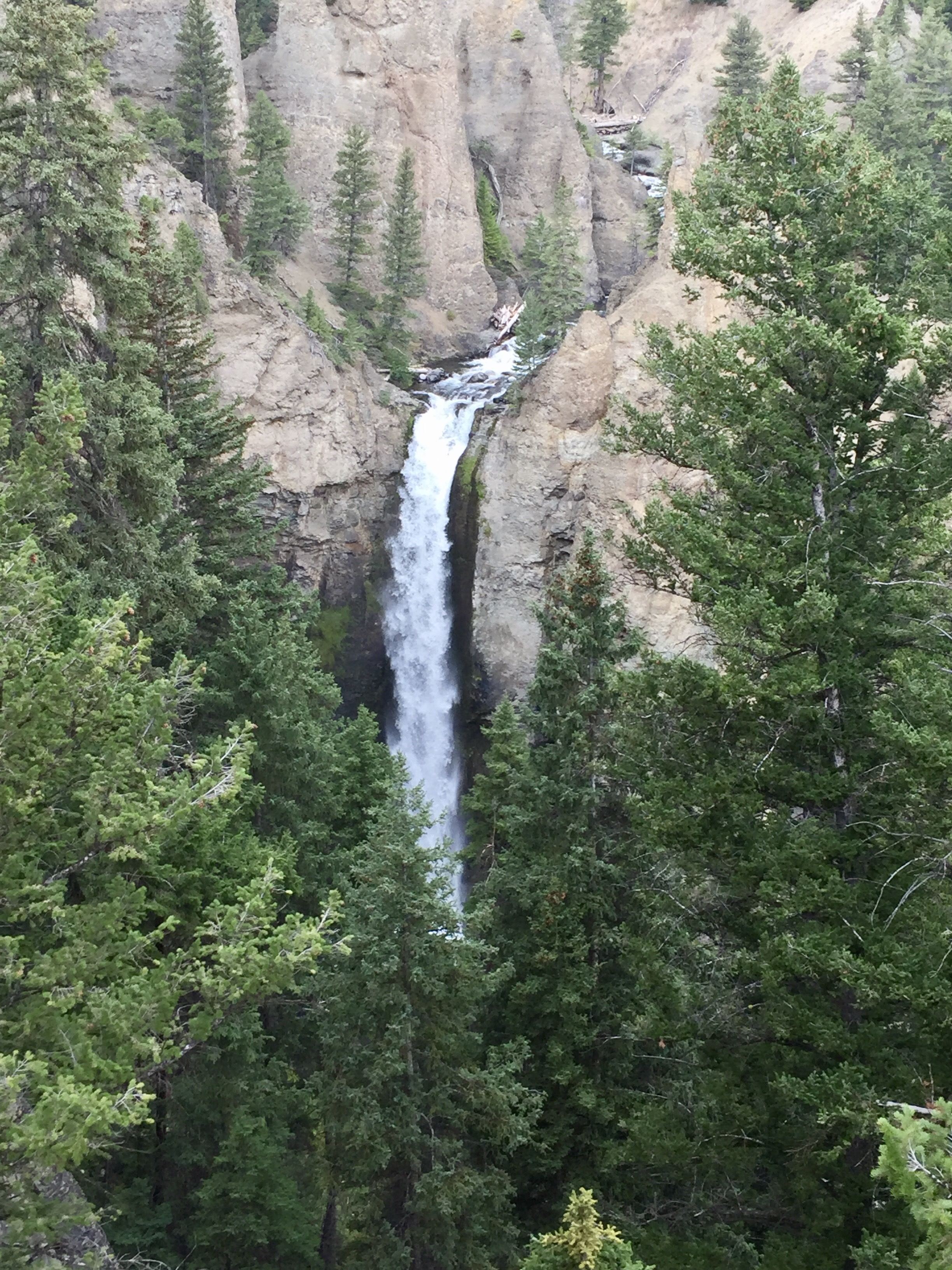 Tower Falls is one of the highest in the park. The rock formations around it look like towers thus the name. If flows downhill just a short way into the Yellowstone River which heads north and west.

The Yellowstone River has cut its way though a layer of white/yellow rock on the left side of the picture. Is is a pretty big river at this point.

Tower Junction has a campground, a store, a gift shop (of course) and is pretty congested. The drive from Canyon Junction to Tower Junction has some of the highest elevations in the park. Once you cross over the high points and head further north the landscape changes dramatically. Much drier looking grass lands, many fewer trees. And further on at Roosevelt Lodge (which is cabins) and a campground, there is another small store and stables where you can go for a horseback ride or a stage coach ride.

These were lined up loading and unloading folks. A horse and rider lead each stagecoach to highway crossing and stopped traffic while it crossed and then went back for another one

Lamar Valley was the real destination though. A park ranger was talking about bison (they are not buffalo) in the park and said most of the 6,000 or so in the park had moved up to the NE corner of the park to Lamar Valley. This part of the park and the lands stretching further east were very much like the old open range land that the bison herds roamed on. Before the railroads and settlers moved west there were an estimated 30-60 million bison. In a short period there were only 571 left in protected herds. Today there are about 500,000 in many smaller herds. Yellowstone has the biggest population today.

And there they were, hundreds if not thousands along the Lamar River. From our vantage point we could see a long way in either direction and there were bison as far as you could see. Big bulls, cows and lots of calves. The ranger said that almost every cow will have a calf in the spring.

It was easy to hear them bellowing and snorting. Most were eating grass or having a lie-down. A bunch of high spirited youngsters (most likely) were running around sort of chasing one another. A few were butting heads, getting ready for the fall festivities. It was pretty amazing to see so many just home on the range.

Back the way we came. And even though this is a high mountain twisting narrow road, here came campers and RVs of every description.

Somehow you have to drive in Yellowstone to see what most come to see. We were pretty pleased to stay close to Madison and see what we could right there without the drive.