Where were you on this day? The day of the total eclipse of the sun whose shadow passed across a big chunk of America. We were in Grand Teton National Park just south of Signal Mountain on a two rut road for 4WD vehicles only. Two years ago we drove the rocky road all the way to the southern end and then on into Jackson. A landslide this spring cut the road in half and a ranger we spoke two said it was unlikely it would be repaired.

When we heard about the Eclipse and where it would be visible we thought first about the summit of Signal Mountain, for a few seconds, and realized every body and their brother would think of that location. Then we remembered the 4WD Snake River Road and thought that is the spot! Not many would subject their automobiles to a road made up mostly of grapefruit sized rocks, deep dried-up mud holes and almost no chance of rescue if need be. Worst of all there wasn’t a porta-potti anywhere in sight. 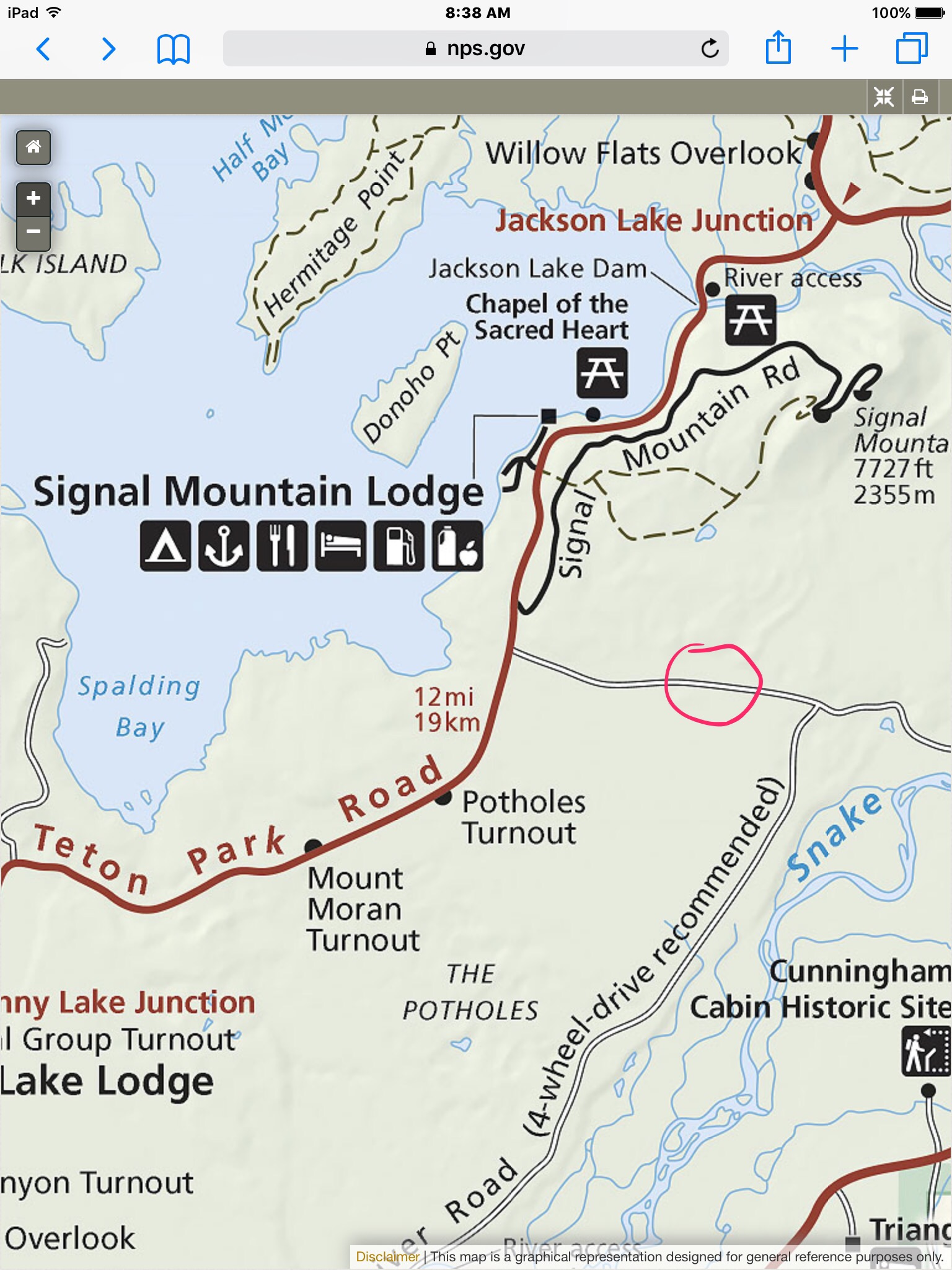 There it is on the map circled in red, our goal. The road is not marked in any way. There is a gate to close it off. The turn off is about 12 miles south of Colter Bay. We expected traffic to be a nightmare at 8 AM but it wasn’t. We talked to some other folks in the campground who left at 6 AM heading for a spot near Gros Ventre right on the line of totality. That 45 min drive took them almost 2 hours. Everyone got up early for the traffic jam.

A ranger was at the entrance to the road. He said no fires, please, and agreed that this was going to be a great place to watch the event. 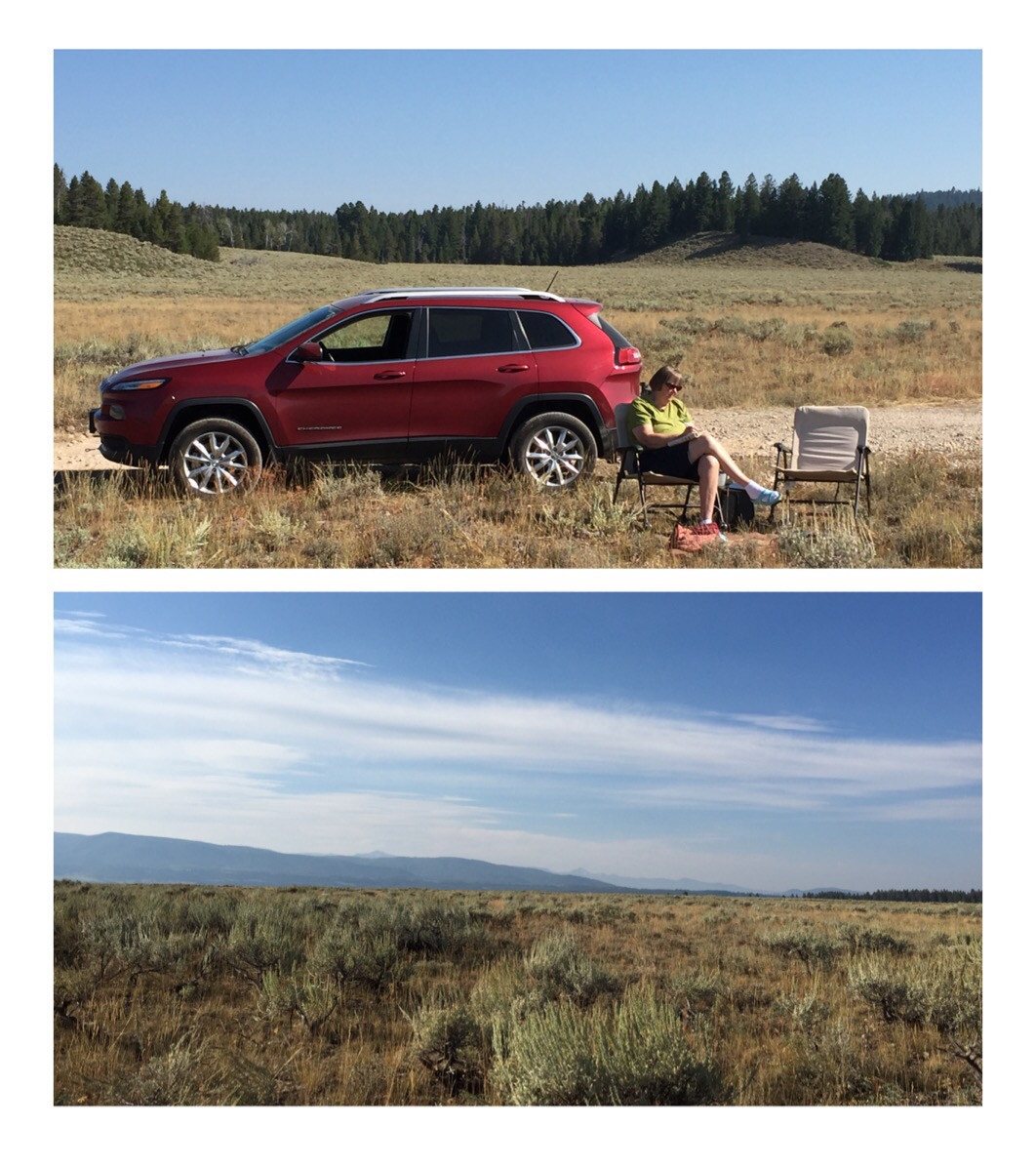 Looking north and south. Nothing much looking south. The sun at the appointed hour would be in the upper left hand corner of the lower picture. Some clouds when we got there but they moved away

Looking west towards the Tetons and east to the Snake River. You can see a car out there in the distance, the closest anyone else was to where we stopped. 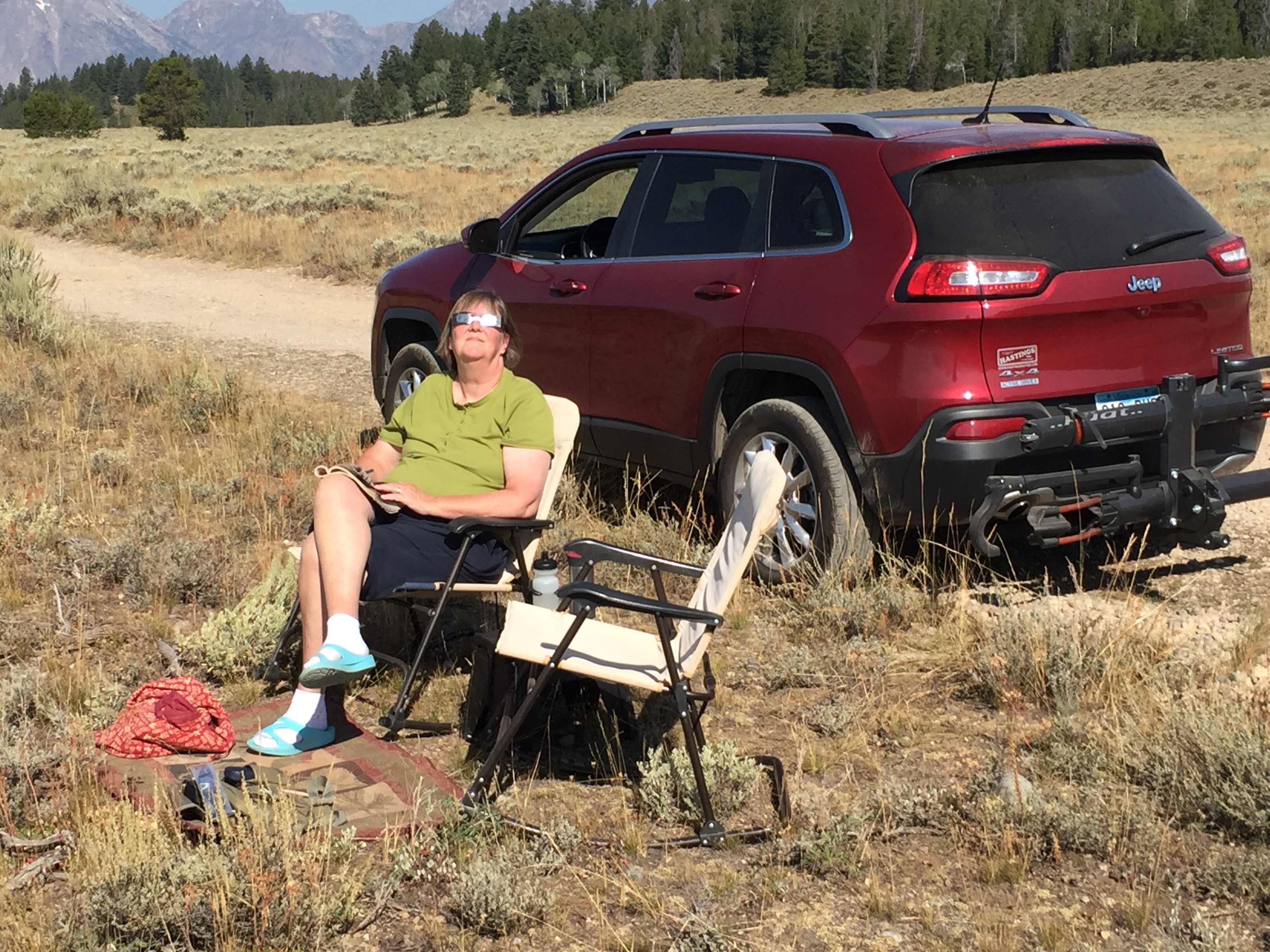 Rocking chairs, a small table, a rug, snacks, coffee, cool glasses and all was ready for the big blink. 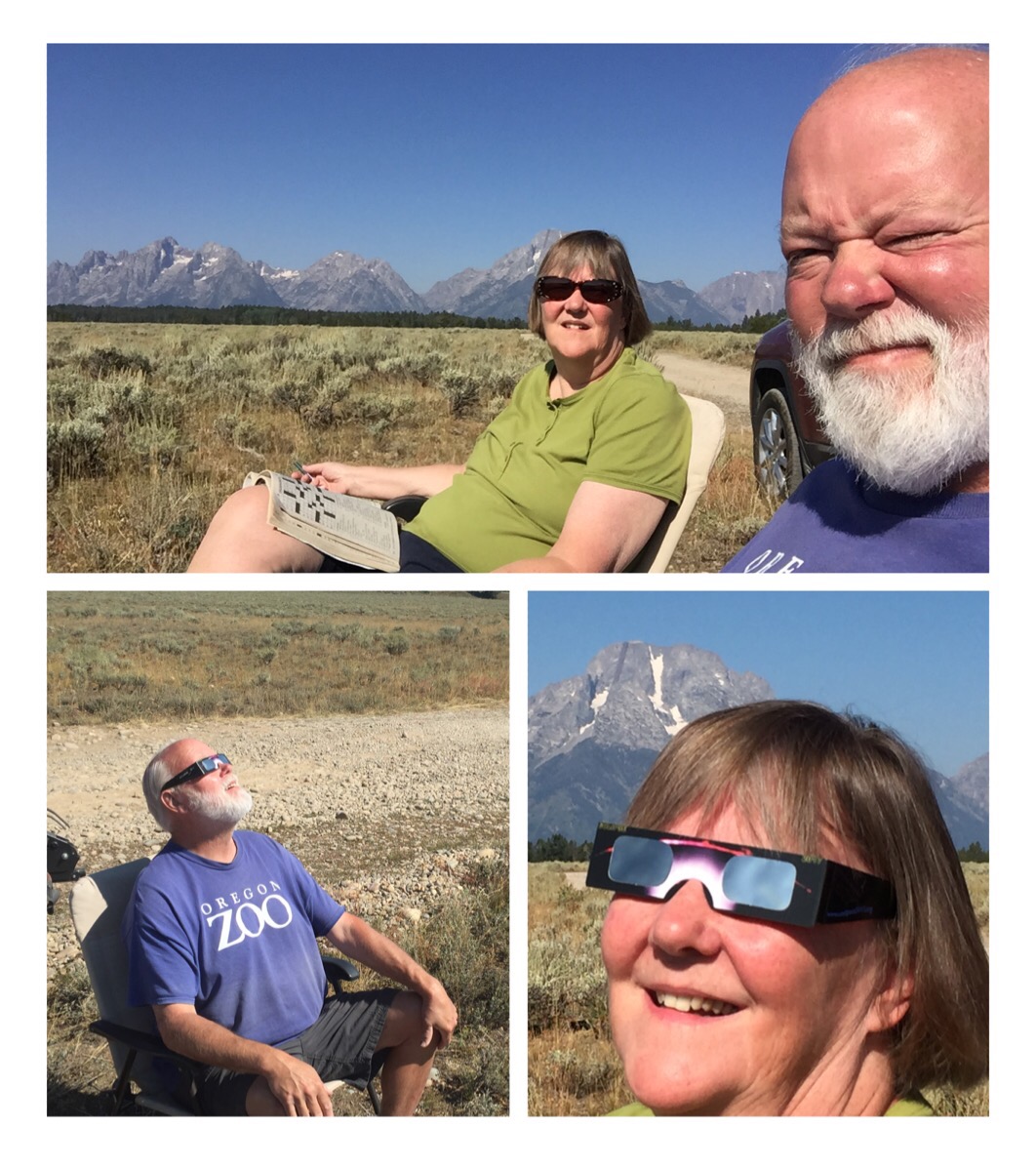 We were so cool. In the sun it was warm, low 70’s. There was lots to get ready for. But there was plenty of time, it took at least an hour for the moon to creep across the front of the sun. I was torn between watching for the exact moment the moon covered the sun and the shadow of the moon moving across the face of the mountains. We were about 7 miles from the peaks and the shadow moved at a half mile per second. So seeing the shadow on the face of the mountains was going to be a split second sort-of-thing.

This was with the special glasses over the lens on my iPhone. The moon is starting to cover the sun. 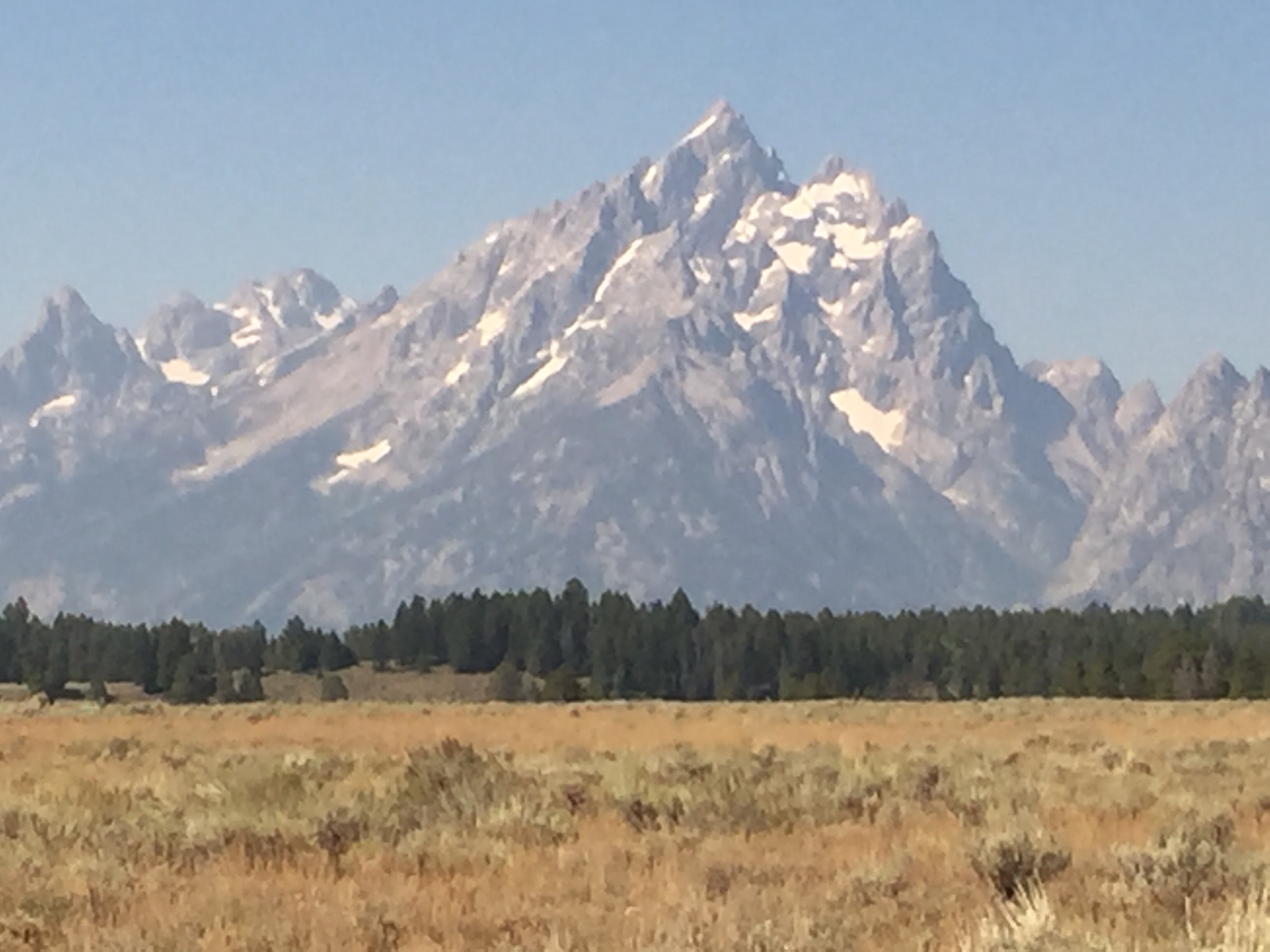 These pictures were just seconds apart. The face of the mountains just got darker in an instant. And then it was dark. 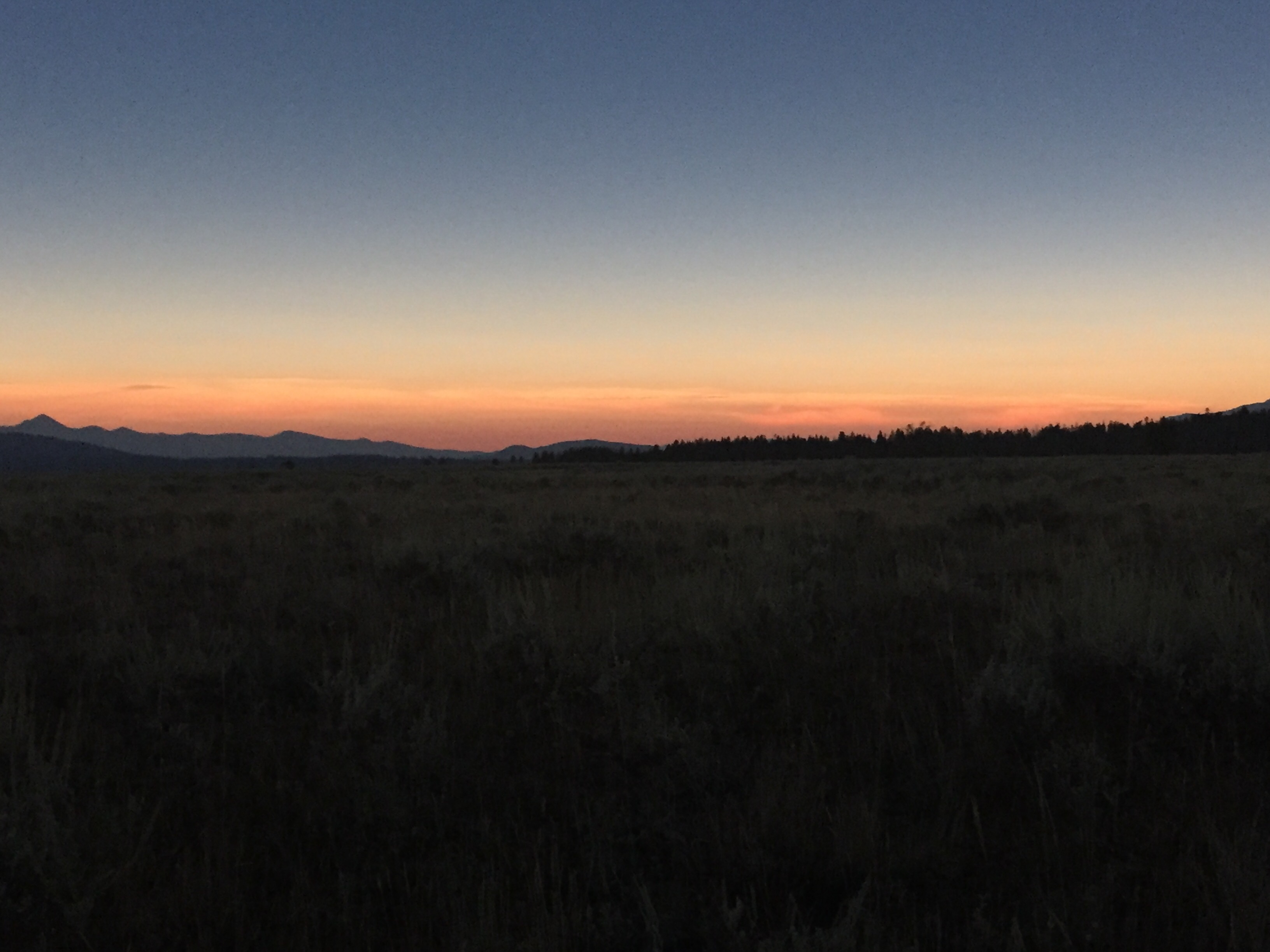 This lasted for about 1 min and 50 seconds while the moon hid the sun. The temperature dropped about 15°.

I wish I could say the next pictures were mine but they were taken by other RV travelers and posted on an RV site. 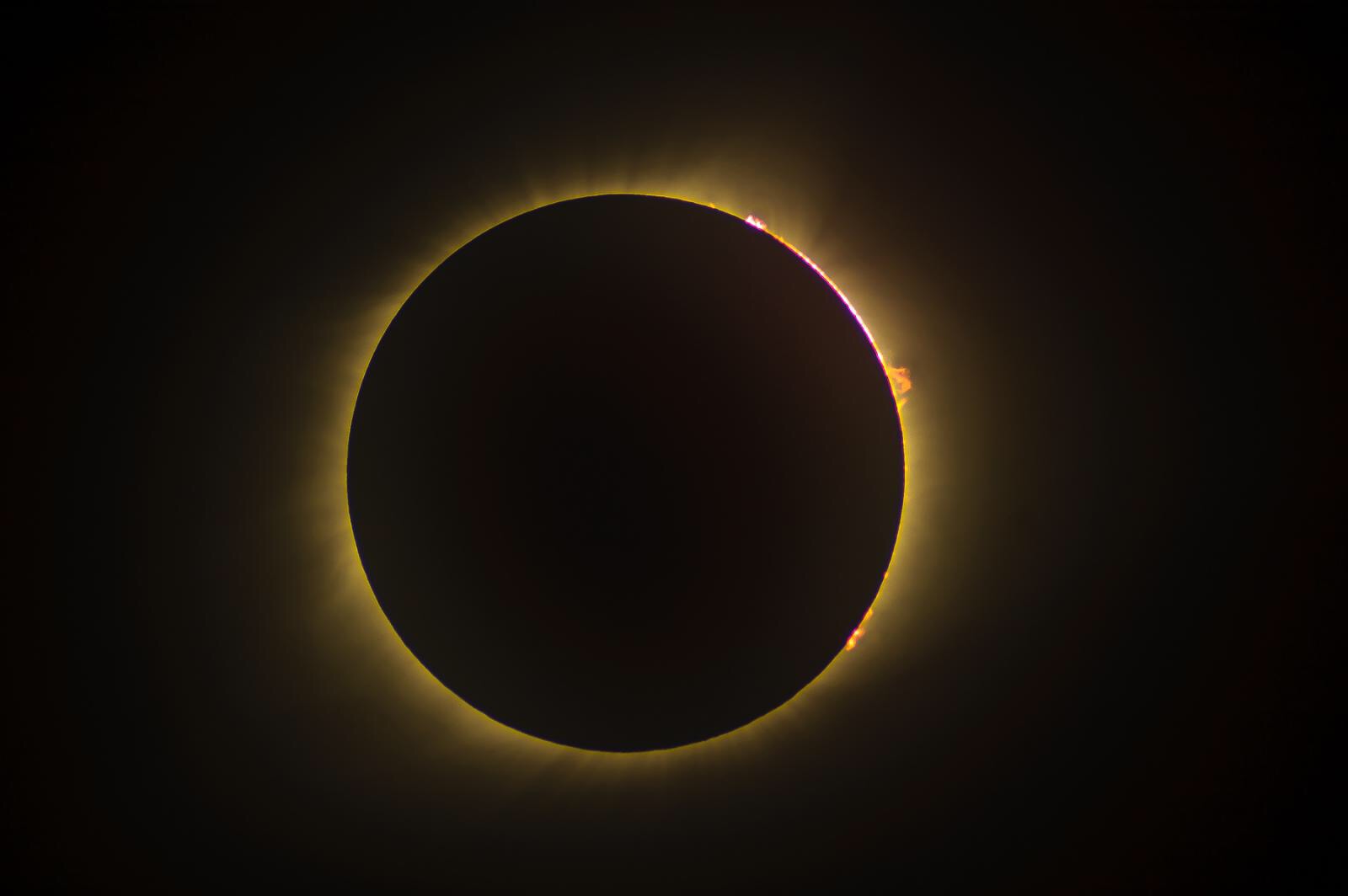 Somebody had a very big lens to get this picture.

This one looks pretty close to what we were seeing.

This one was very good. Look at the reflection on the guy’s bald head.

And then the moon moved on, slowly revealing the sun again. It was light again almost immediately. The temperature went up slowly. Most people started for home right away. We hung around for another hour enjoying the sun and the warmth. Several SUVs and trucks passed us heading back for the highway. When we were ready to leave there was no one in sight. A couple miles back to the highway. The ranger was still there, he said only nine went in and we were about the last to leave. He said radio chatter indicated lots of traffic further south.

Even the local grocery store got into it.

I hope you had a chance to see it, probably on TV.