We went on a hike to the Polecat Hot Springs. These are actually in the John D Rockefeller Memorial Parkway area between the Tetons and Yellowstone near Flagg Ranch. The Snake River flows south out of Yellowstone through this area and into Grand Teton National Park where it becomes Jackson Lake. Fishing on this part of the Snake River is said to be very good. There are many fewer people fishing and the fish are less stressed. Access to the river seemed easy and many fish-floated the seven or eight miles from a launch point at Flagg Ranch down to Jackson Lake.

Flagg Ranch is not now nor ever was a ranch. It was an early Army outpost guarding the southern approaches to Yellowstone. It got its name from all of the flags that flew over the base. There was no explaining the double g at the end. There was a lodge, cabins and campground there for a long time until it burned down. A new log lodge was built closer to the Snake River which turned out to be a poor location as it was in the flood plain of the Snake River. So in the 1990’s they took the lodge apart and moved it about a mile to its present location.

The trailhead to Polecat Creek and the Polecat Hot Springs started near the lodge. Some maps said 1.5 miles. The signs said 1.2 miles. None were very accurate. It turned out to be closer to 4.5 miles round trip when you figured in all the connections and links from one trail to another.

The Polecat Creek is closer to a river based on what we saw there. It was pretty substantial. We didn’t see any fishing people which seemed odd but there were lots of white swans (not seen here). This water is warmed a bit by the Hot Springs.

A large area north of Flagg Ranch burned in the summer of 2016. The south entrance to Yellowstone was closed for some time as was the only way into the northern entrance to the Tetons.

Even after a year the woods still smelled strongly of burned wood. In most places the fires moved through quickly burning everything on the ground and the trees. Not long enough to completely burn the trees, just long enough to kill them and leave them standing. The grasses and ground cover seem to be coming back in many areas. In areas where it was particularly hot they take longer.

There were areas where the only burned part on the ground was at the bases of the trees. Sparks and embers from other parts of the fire blew into the upper branches of these trees and set the tops on fire and as the fire burned down the tree the burning bits fell to the ground and burned around the tree but not enough to spread the fire along the ground. 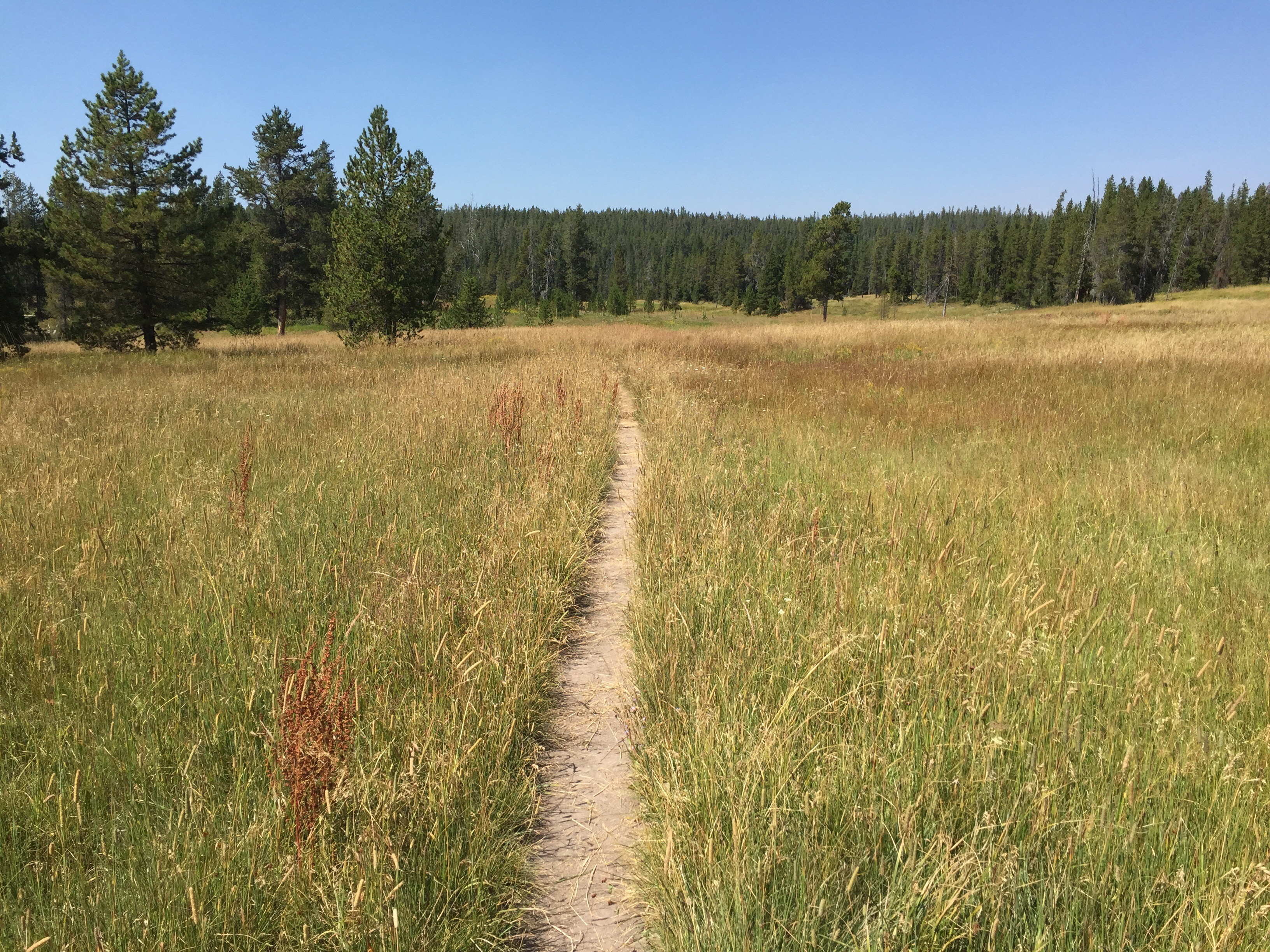 The trail mostly went through the woods and then opened up into a large grassy meadow. This seemed like an easy trail, mostly soft loose sandy material. By the end we each had a sore knee and were pretty tired. Four plus miles in soft loose sand is not as easy as it seems.

I never figured out what these plants were but they were fairly common. And big, 5-6 ft tall. And right at the top was a most curious looking red dragon fly. There were lots of them in this area near the hot springs.

The red dragonflies were about 3-4” across. If you were patient one would land on something nearby and you could get pretty close. Their wings, especially near the ends were nearly transparent. I have never seen anything like these before. Maybe it has to do with the Hot Springs which are full of sulphur and other chemicals.

These are times when I wished I had a better camera but the iPhone works pretty well. Maybe a new camera or a new iPhone X is in my future.

The Hot Springs are an entire meadow of oozing, hot smelly water which collects in small streams. People used to come up here to sit in the pools which at times are bigger. Signs now warn to stay out of the water because of the high temperatures (up to 180°), the nasty chemicals in the water and worse, the bacteria that grow in the water. Since this all flows down into the Polecat Creek maybe that is why there are not as many fish there.

The red area was just like the hot springs in Mammoth, a hard layer of built-up mineral deposits with water flowing over it. This water was very hot.

Further up a side branch enough flowed in from the side to make a small cascade.

The bacteria and algae formed long stands of slimy hair that swayed in the current. It was not bad looking but why would anyone get in this primordial soup of goo.

There is always time for a sit-down break, even if it is on a food storage box where the bears come looking for a snack. Hiking pole at the ready, just in case.

And of course we had our can of souvenir bear spray. They are about $50. Signs everywhere say you need them. Only about 1 in 100,000 visitors will come close enough to a bear to need it. I guess I wasn’t going be that one without it. You can’t take them on an airplane on the way home, they are not returnable. So it is now a souvenir. Maybe I can interest a mail carrier in a serious dog deterrent.

The burned bark is like a big blister. It just peels off in big slabs. It is hard to see the forest like this but it is a natural event. The heat causes the pine cones to open and the new seeds to pop out. The burned forest floor leaves little to compete with new seedlings until they get established. It may take 30 years for the new trees to get to the size of the burned trees.

A nice hike. A wide variety of things to look at. Weeks later we are still nursing sore knees.