Ya, I know I am a bit behind again.

We left Winslow and the big hole heading east on I 40 for Cochiti Lake Corp of Engineers (COE) park near Peña Blanca, NM. It was snowing up that way so we stopped at a giant casino (Route 66 Casino/Hotel) just before we got to Albuquerque for the night.

The casino and hotel are just a few years old and the campground is only a year or so old. It was quite upscale and unlike many casino campgrounds right up there in price. We went into the casino and had a pretty good supper.

The next morning we navigated through Albuquerque and headed north on I 25. We got off at the Santo Domingo Pueblo exit, headed west and a few miles later came to the Pueblo. Its ancestral name is the Kewa Pueblo and that is also the name of the RailRunner train station there. The train runs from ABQ to Santa Fe. A bit further on up the Rio Grande River valley we came to the small town of Peña Blanca and then across the river and the face of the Cochiti Dam and up to the Cochiti Lake COE campground. A bit further on is the town of Cochiti Lake and the Cochiti Pueblo.

We had a really nice site up the hill side overlooking the lake. water and 50 amp hookups for $10/night. It is good to be a geezer.

There is a boat launch and docks. Lots of sail boats, kayaks, fishing boats and canoes. It is a “no wake lake” so not too many big power boats.

Each site has a ramada (sun shelter) over the picnic table. 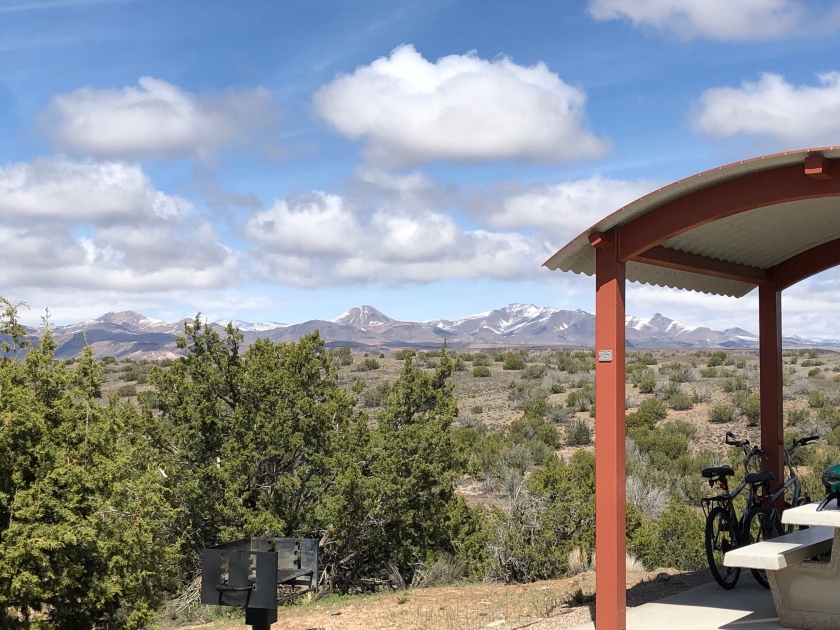 And a great view. There was snow on the mountains in the distance up towards Los Alamos and Bandelier National Monument. The ancestral people from Bandelier moved down toward the Rio Grande Valley around 1400 AD. The people in the Cochiti Pueblo today are their closest descendants.

Down the boat ramp, across the lake and over the dam you can see Sandia Peak which is more than 40 miles away. You can see the spillway water tower next to the dam where the water flows out of the lake and continues on as the Rio Grande as well as into several irrigation canals that feed water down the valley to agricultural areas. The spillway is about three miles from the near end of the five mile long dam.

We were in Santa Fe a couple times. One day we stopped at the Cowgirl BBQ for an early dinner. Susan had her favorite, seared scallops. I had a great beef and brisket chili on Fritos, a classic Frito Pie.

We have been looking for a SW style rug for the coach so we checked out several places in Santa Fe. Nice choices but the right size and price were not among them. So we went to Chimayo on the old high road to Taos where there are several local weaving shops. We made ready by having lunch at Ranch de Chimayo, always a treat. We have been coming back here since 1980.

But it wasn’t quite enough for the sticker shock. A hand woven 4×6 ft rug started in the low thousands of dollars. So much for that, maybe Target will have a nice one.

We went to the Farmer’s Market on Saturday. It is quite a spectacle. Fresh veggies, salad makings, eggs, meat, bakery goods, breakfast, coffee, art stuff and much more. Outside there were more artists in booths, many we have seen before.

We found a small Kiva style ladder decorated with dried flowers. It is about a foot tall and fits perfectly in the coach.

We also went to some of the great museums. One of our favorites is the Wheelwright Museum of the American Indian. This time the primary exhibit featured the mixed media work of Rose B Simpson from the Santa Clara Pueblo.

She makes a significant statement in her work. It is stunning to look at and think about what it means. 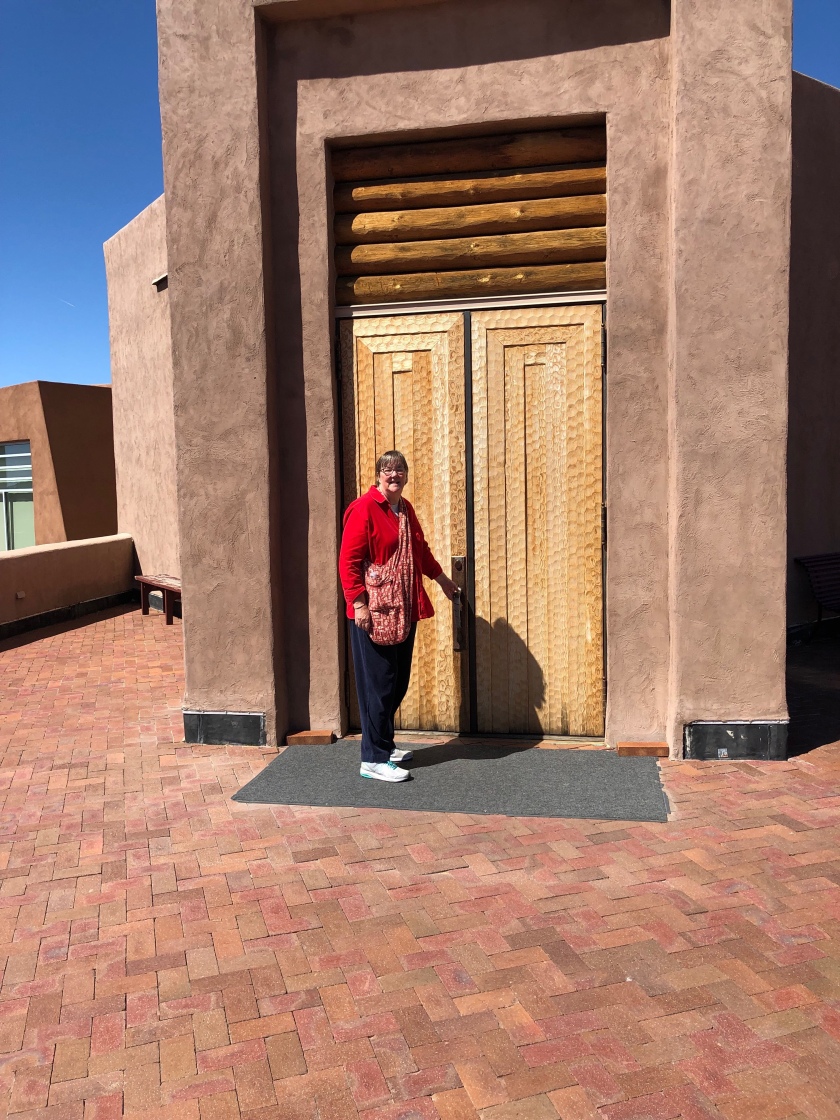 Here are some of the amazing sculptures in the exhibit. They were arranged in N-E-W-S orientation if the gallery. 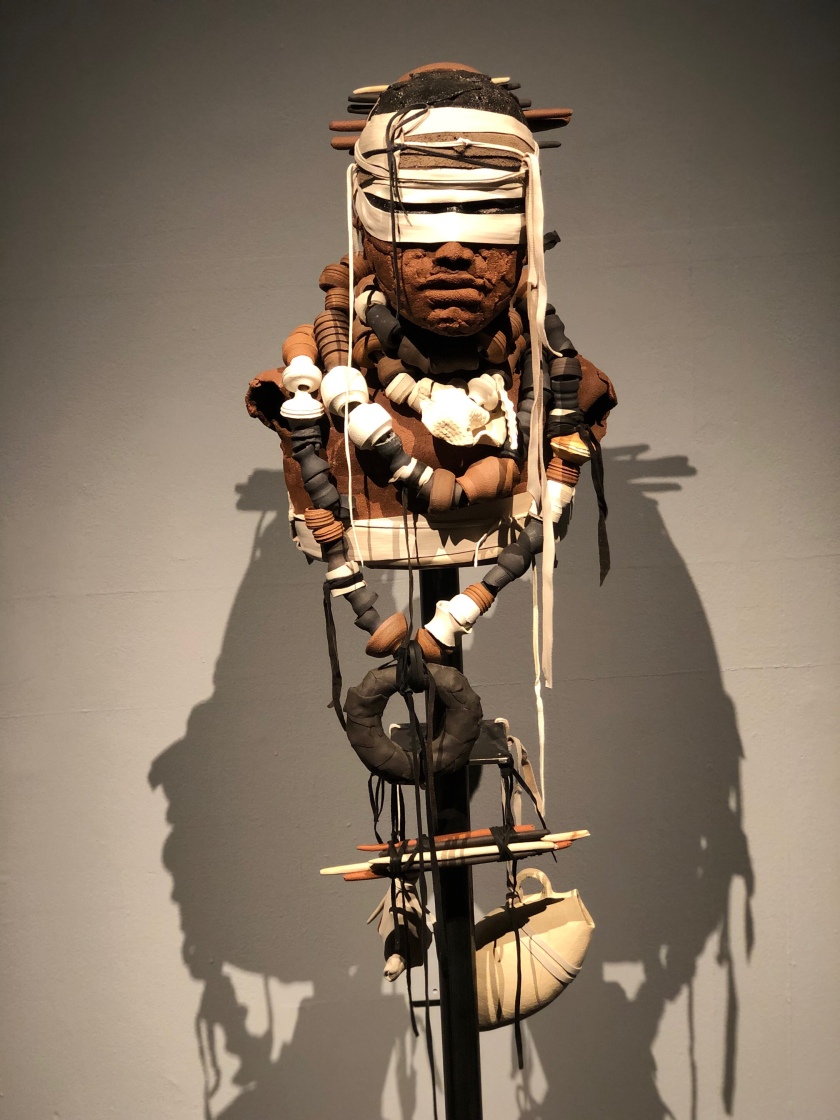 In the descriptions of the work Rose Simpson says they are all self portraits as she explored her own feelings about the world around her, her culture and childhood. She needs the modern world to do the work to express herself while longing for and trying to reestablish the basic self sufficiency she grew up with.

The Wheelwright also has a stunning jewelry collection in their Center for the Study of Southwest Jewelry. It is more than just a display, it follows the evolution of style and materials from where it came through current masters and indicates where it is heading.

They also had a smaller exhibit of the works of Bob Haozous, “Old Man Looking Backwards.” Most of this was prints with volumes of handwritten text where he explores some of the conflicts between art, cultural survival and contemporary life. Some of this was difficult to read.

The Wheelwright should be on your destinations to visit.

We were only in the Santa Fe area for 8 days, a short visit. We have been coming back every couple years since 1980. Another small bite but it leaves so much more for our next visit.

It is still snowing in MN. No hurry to get home so we are heading for the Texas Hill Country to meet friends in Fredericksburg.