We were in Fredericksburg last year about this time when it was still snowing in MN. This year is the same thing. Still snowing so we are heading to TX.

Our good friends Mike and Jackie and Ted and Karen were going to be in Fredericksburg so we decided to join them. Bill Blackmon was there too with his brand new Airstream trailer. Then Don and Tys (Foretravelers from California) managed to sneak in for a day. Bob and Sue (Foretravelers from Oregon) were nearby in another park. Norm and Shirl (from Colorado) were there in their fifth wheel which they got after their Foretravel. And Ralph was in still another park in his Foretravel. These things just seem to happen, not much coordination, the word gets out, everyone makes their own way.

We walked every day while we were there. Three laps around the park and back and forth on the lanes got me very close to 10,000 steps. I was over that on 4 of the days we were there.

We went to Luckenbach, TX (population 3) for a visit. It is just 13 miles from Fredericksburg. Luckenbach is probably best known as an outlaw country western music venue made famous by Waylon Jennings and Willie Nelson in 1976. It is on Grape Creek (most likely a misspelling of Gap Creek) which is what Luckenbach means in German. The town of Luckenbach has been around since the mid 1800s.

There are several old buildings like the Post Office. Most are stores and eateries. Lots of parking areas and several stages for music events. They were setting up for a big music festival, many bands, all weekend. It was pretty busy.

A bunch of old cars drove through. 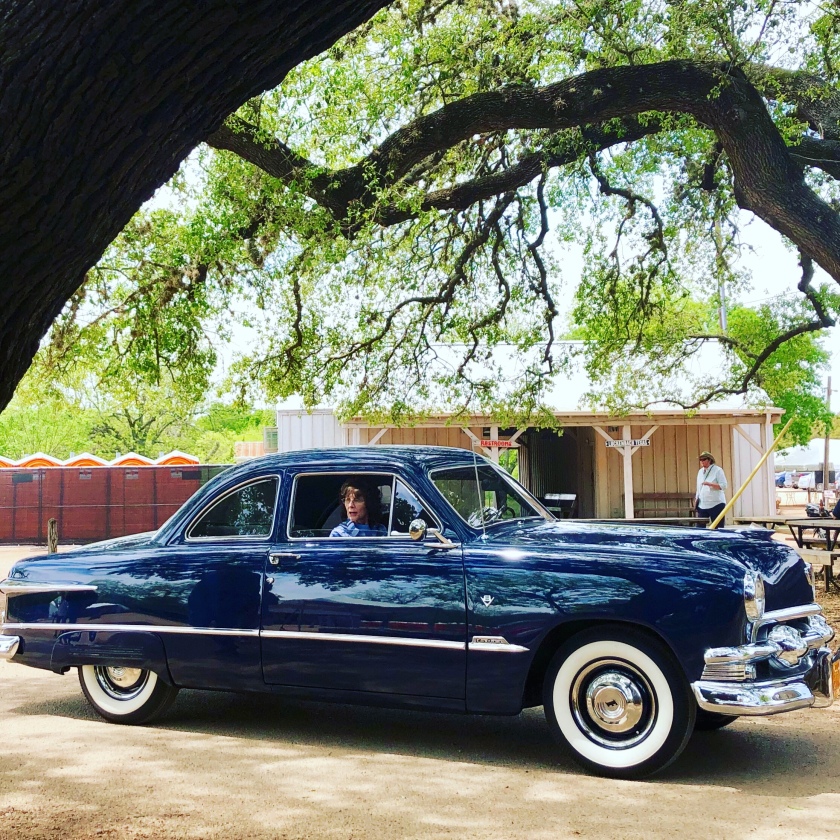 I think it was an old car club out for an afternoon drive.

The tickets for the weekend music were about $90 a day. My guess is that when Waylon and Willie played here it was maybe $5.

We went to Alamo Springs for lunch. Fabulous burgers and the half you bring home is great for dinner. 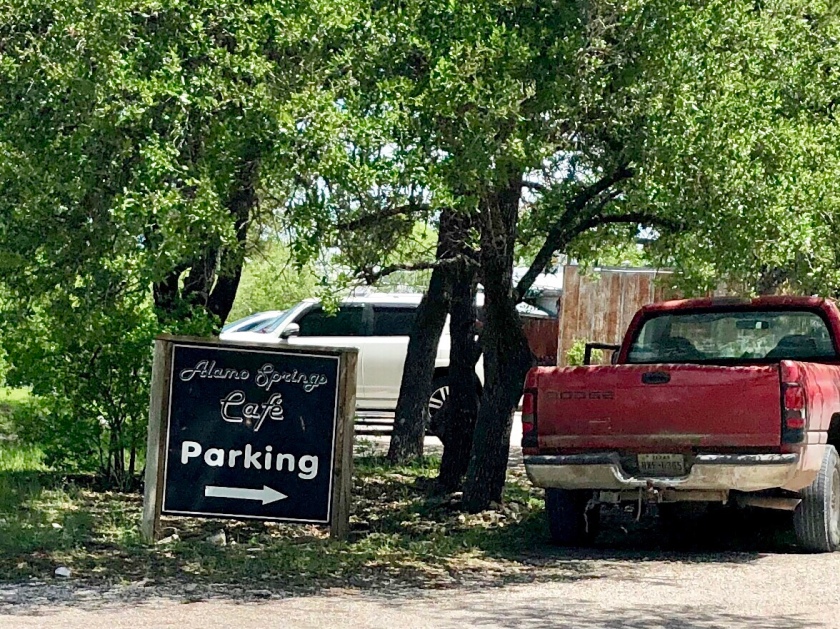 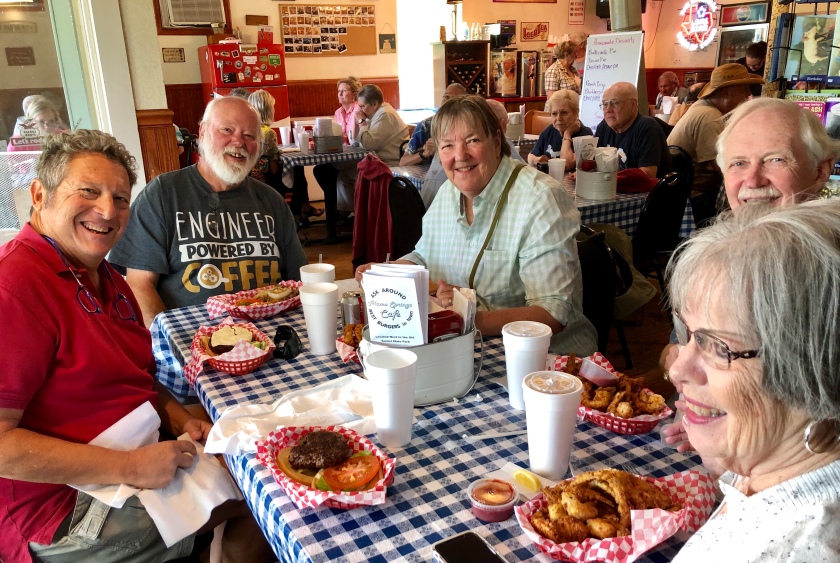 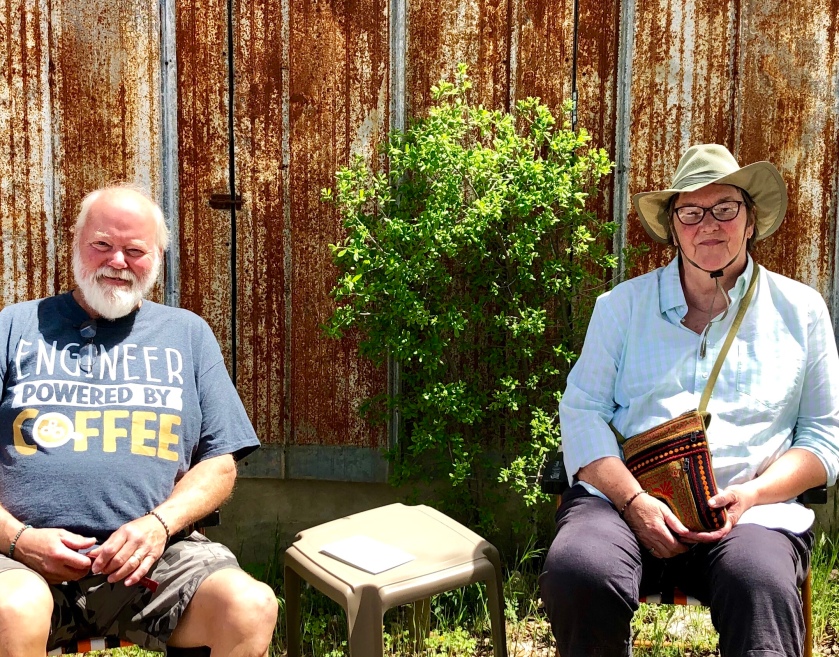 And Ted and Karen.

One afternoon we went to a car shop that restores and sells old cars. 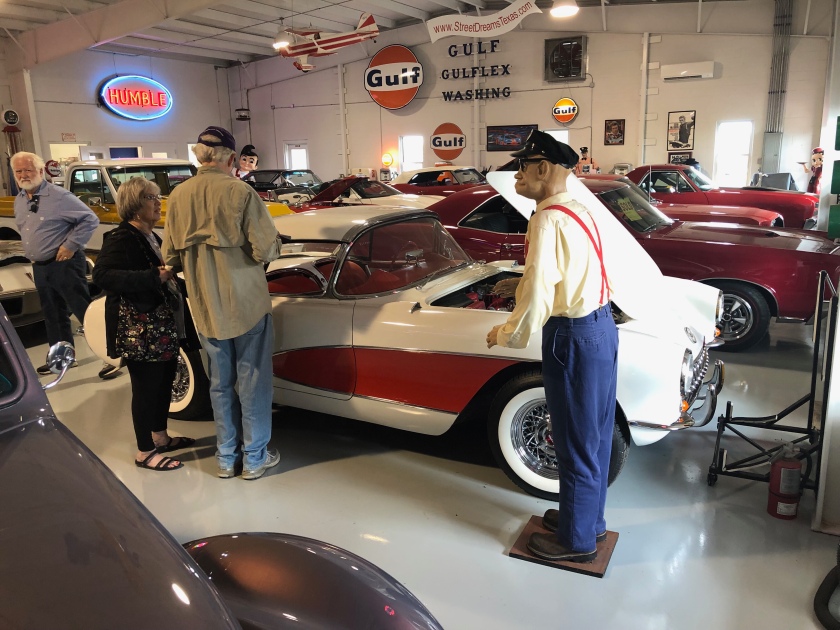 Mike and Jackie liked this one but had a hard time getting any info from the sales guy on the right.

Susan and I went to a Yard Art place. We liked the sunflowers. 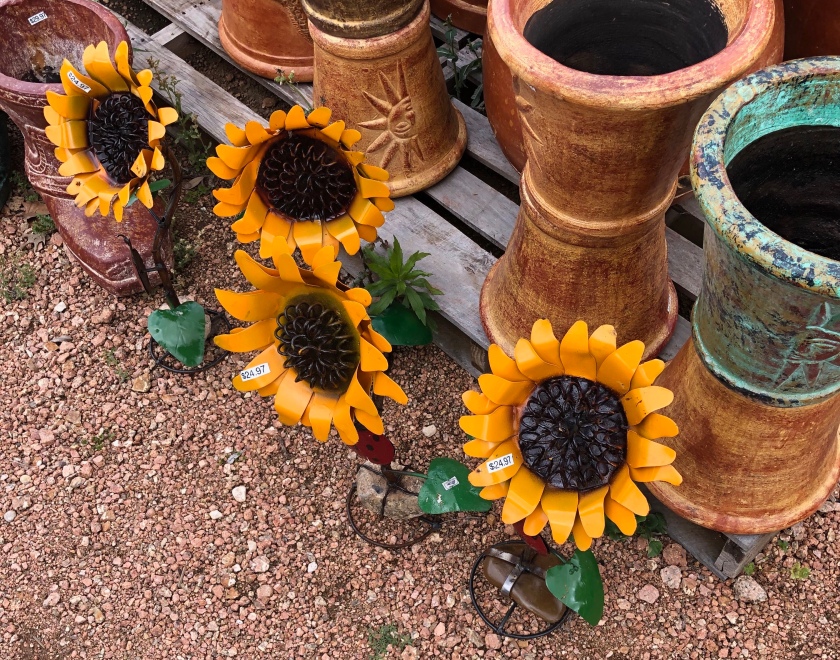 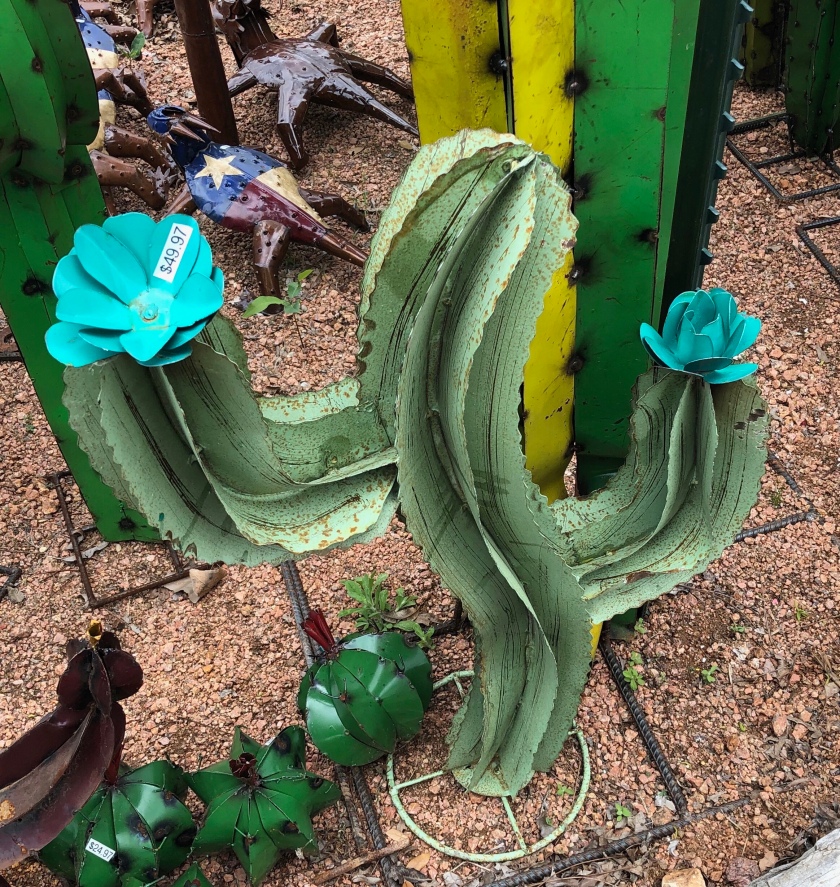 And a few other things. Bought none.

We gathered a couple late afternoons to visit.

Several evenings we gathered in the park’s rec room to play cards. Uno and Quiddler. With more people Quiddler seemed to be a better choice. These were always fun. Sometimes there was desert. Jackie made strawberries and cake with home made whipped cream. And then we discovered lots of ice cream in the big freezer.

Jackie got a new puppy, a chocolate toy poodle. Charlie. He was cute and we got along pretty well. He even let me take him for a walk.

He looked back several times as we walked down the road but as soon as we were around the corner off we went. Of course he checked out every grassy spot. Good thing I was prepared.

The day before we left we went to the Airport Diner. It is a retro look with great food.

It was very good.

We were all ready for a nap after lunch.

That is about it from Fredericksburg. It is a very nice place to visit, lots to do, great places to eat, shopping of course and the best part is our friends.

We are wandering toward home. A short stop in Baytown to see Rudy and Carolyn and a few others.