The Battleship USS Alabama, (BB-60) was one of four 1930s South Dakota class battleships. They were shorter than later battle ships to comply with existing treaties regarding displacement but were equipped with three main turrets with three 16″ guns each. The smaller ships with larger crews were crowded.

The Alabama construction was begun in 1940, launched in early 1942, commissioned in late 1942 and served in the Atlantic protecting convoys to the Soviet Union until it was sent to the Pacific in 1943 where it was primarily used in aircraft carrier task force support but also participated in several of the major battles in the Pacific. 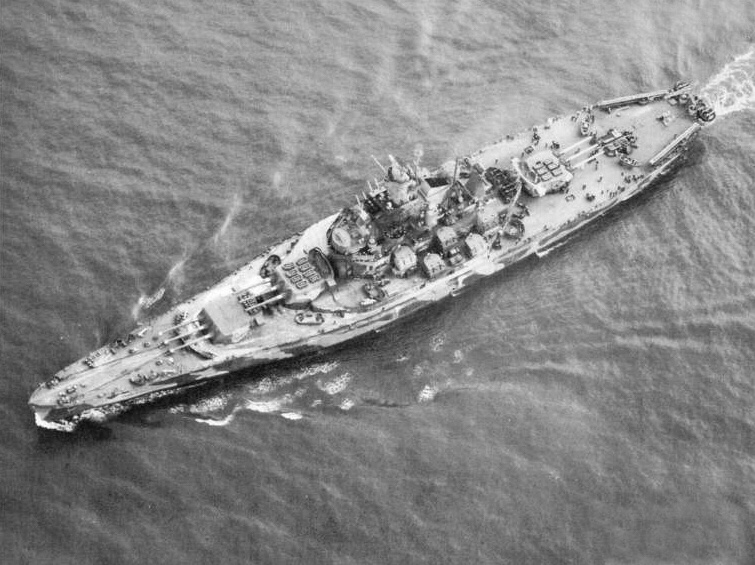 It was decommissioned in 1947 to the Pacific Reserve Fleet until 1962 when she was stricken from the Navel Register.

In 1964 it became a Museum ship at Battleship Memorial Park in Mobile Bay. The Memorial Park also has a collection of aircraft, tanks and the SS-Drum, a submarine from the WWII era. 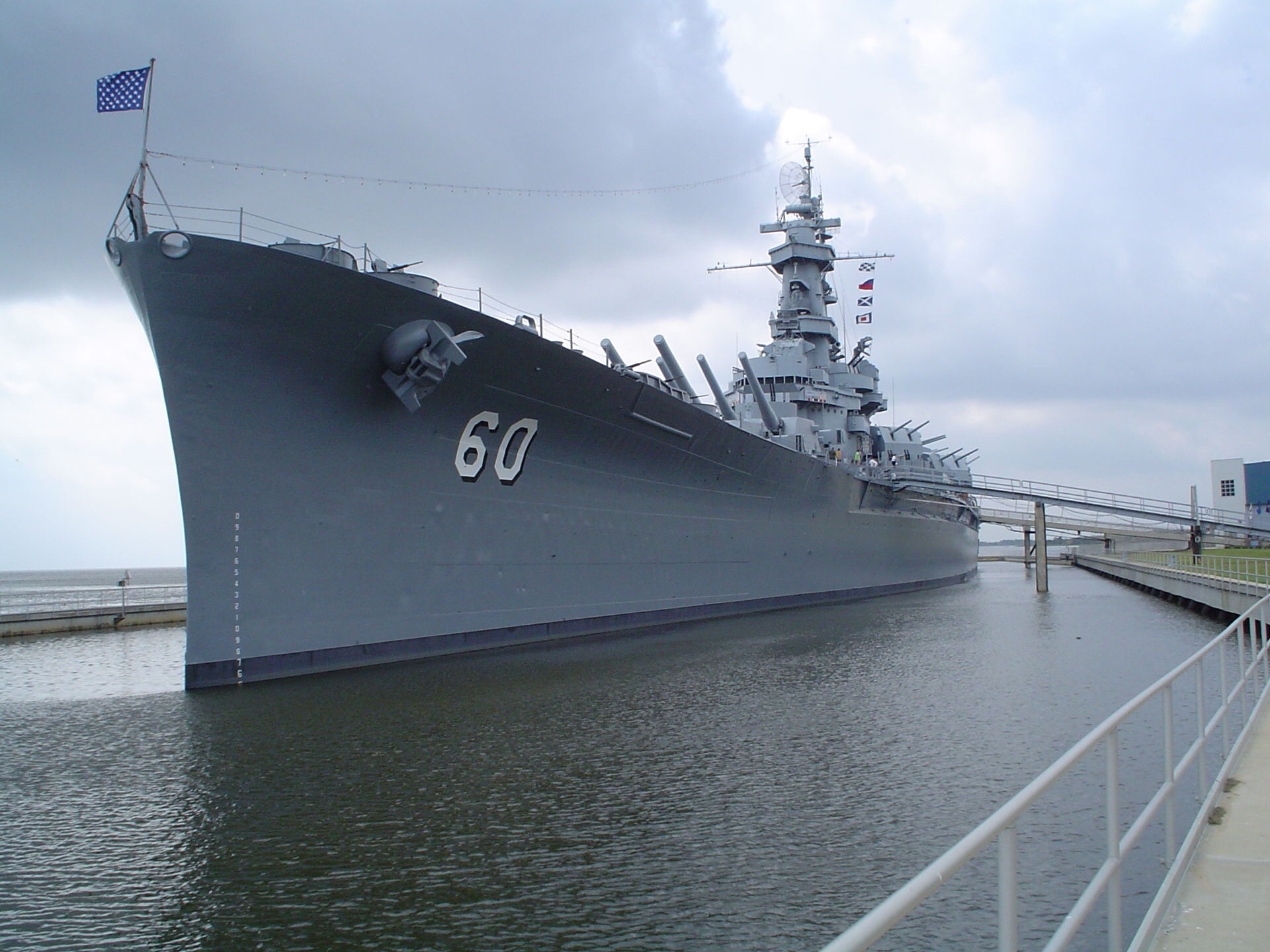 There are three tour routes through the battleship. One goes way down deep where the boilers and steam turbines drive four huge propellors with more than 130,000 HP at speeds up to 27.5 knots (33 mph). That is pretty fast for a ship that weights more than 46,000 tons. Lots of ladders up and down. 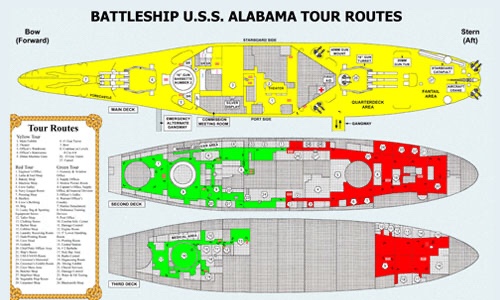 The deep down tour took you to where the ammunition was stored and the bottom of elevators that carried powder bags and shells up to the 16″ guns and to the 5″ guns.

There were also the fire control stations where there were giant gyroscopes that provided a stable platform for the mostly mechanical computers that churned out the when and where to fire the big guns to shoot and hit something 20 miles away while both the Alabama and the target were moving forward and up and down and side to side in the open sea.

Another route leads more through the middle of the ship where most of the crew quarters and all of the support services were. These included berthing areas, messing areas, machine shops, damage control, sick bay, ships store, the barber shop and everything else the 2,500 officers and crew needed. 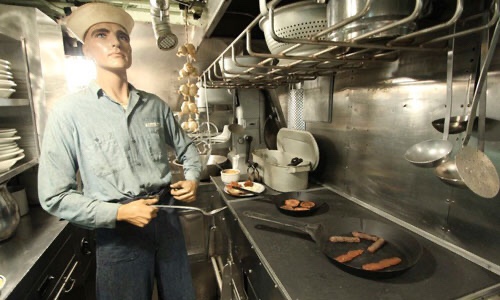 There were three distinct classes on the ship, enlisted men, non-commissioned officers and Officers. They all had their own service staff, dining areas, ward rooms and quarters. It looked like it would have not been much fun being an ordinary seaman. Some had real berths. Most slept in hammocks hung from hooks when in use and stowed away at other times. 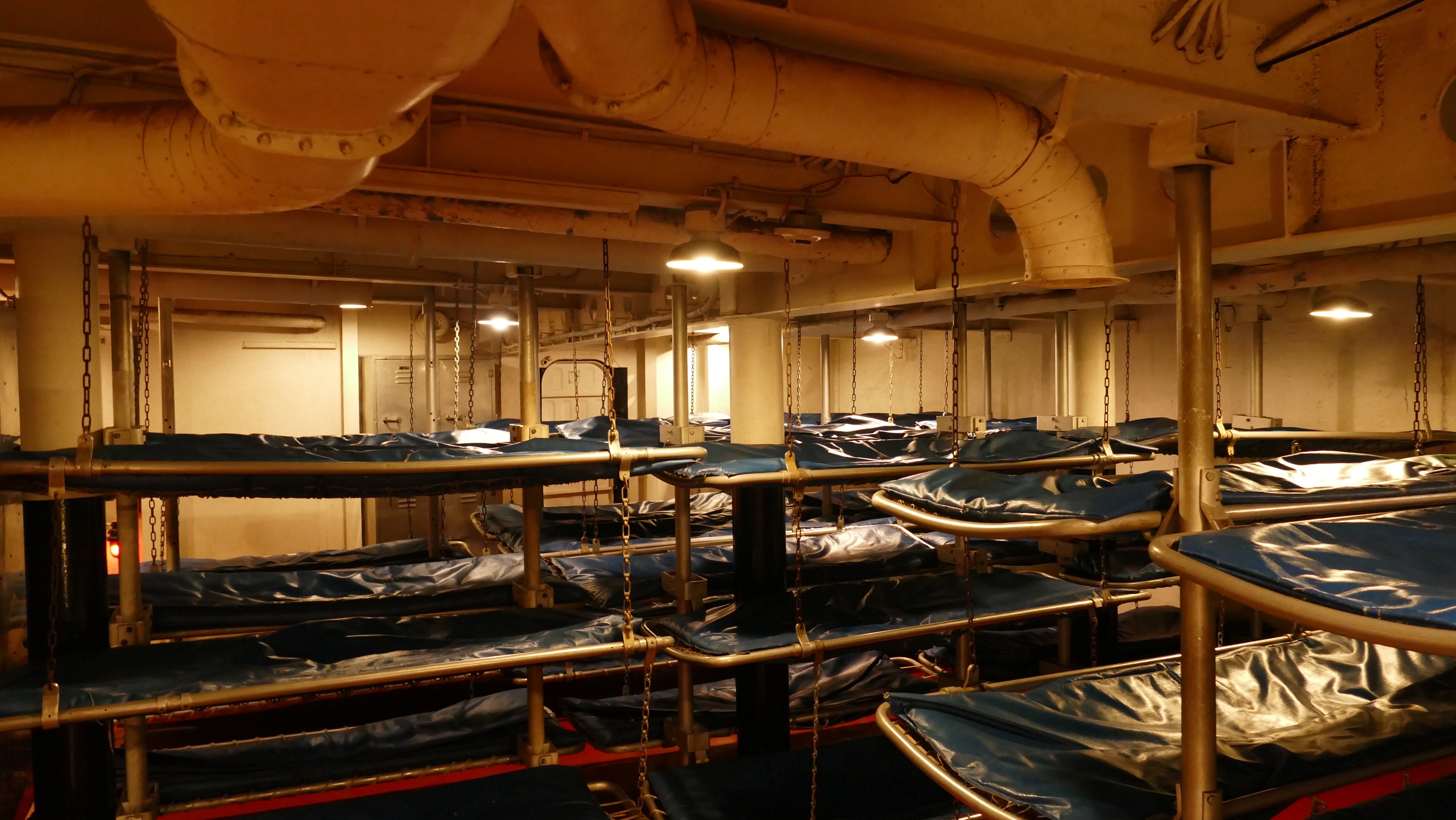 The last route was up many levels from the main deck of the ship to the upper levels where the bridge and combat control center are and levels above that for lookouts. 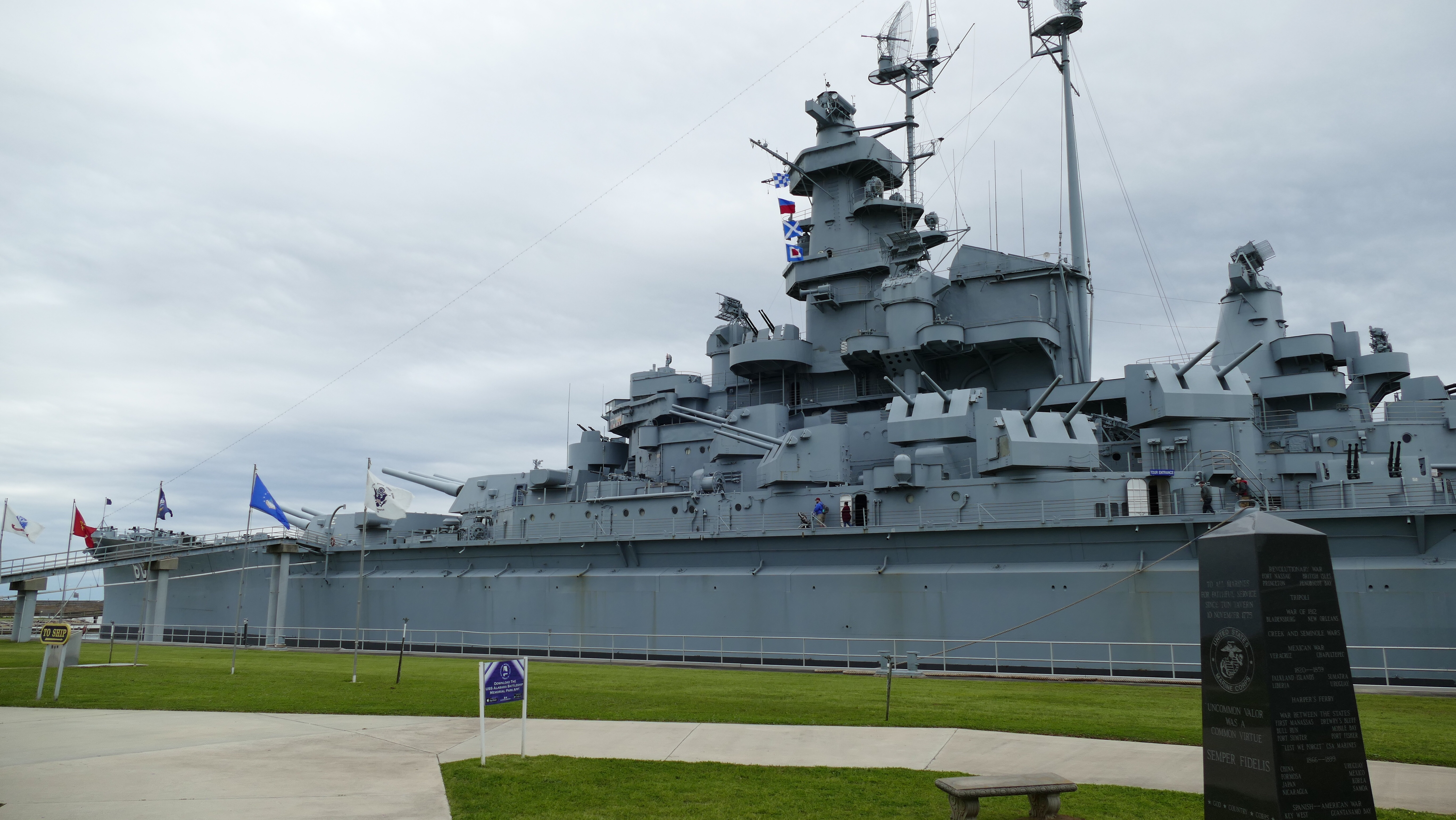 The battle bridge section where the Captain would have been during combat was enclosed in 16″ thick armor. The door looked like a small but thick bank vault door. All of the movies I remember seeing never looked like that.

From the very point of the bow it looks narrow and menacing. When we drove up to the Memorial Park we though it looked smaller than we expected. But it was not.

The three main gun turrets with three 16″ guns each were immense and the structure under what you can see went all the way to the bottom of the ship. All of the powder bags and shells were stored inside the heavily armored core of the gun turret tower. It appeared that the entire turret tower rotated as the guns turned to aim. 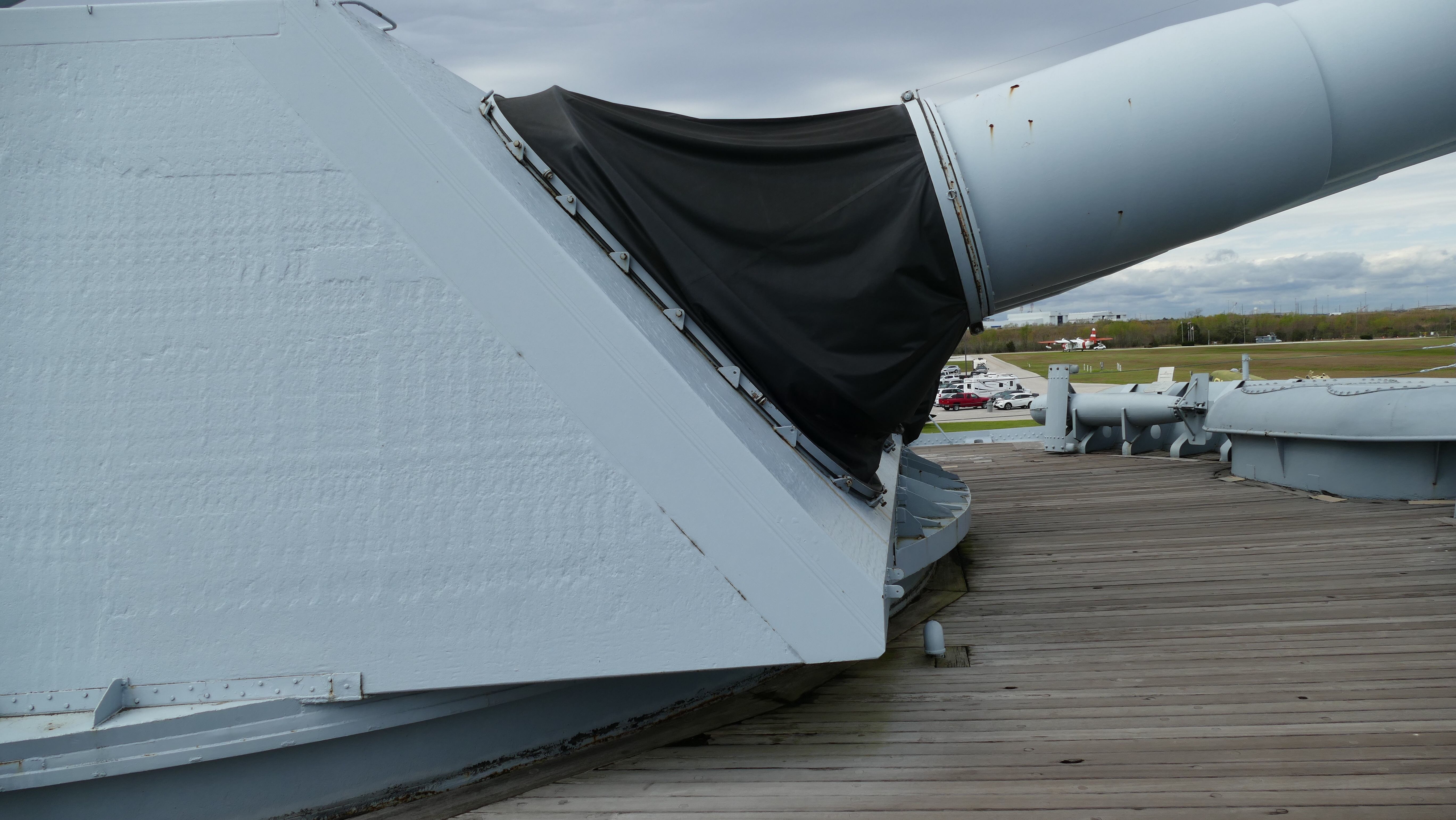 The front armor face of the turrets had 18″ thick armor. I found it interesting that these giant plates were jointed together with joints that looked like woodworking joints for strength.

It was a very big ship. It still would have been a terrifying place to be in a sea battle.

There was a lunch place on site where we had a quick lunch before moving to the hanger building and the USS Drum submarine exhibit.

Lots of familiar airplanes in the hanger. 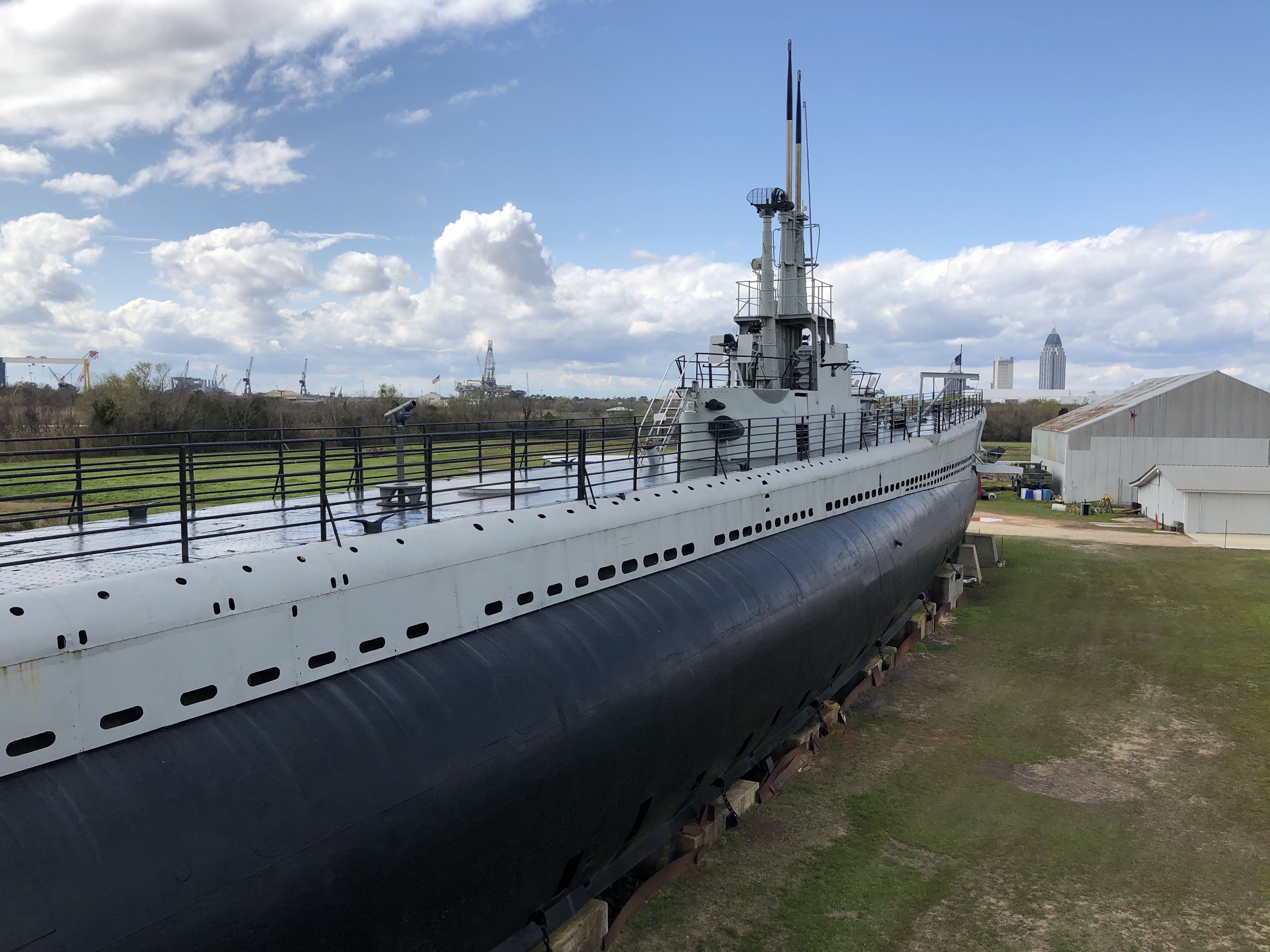 The tour started near aft end, down into the sub and moved forward. Susan waited outside.

We toured a submarine in San Francisco. There were alot of people on that tour and the sub really felt crowded, probably like it would have been in actual service.

The USS Drum was empty except for me and a couple volunteer folks doing some restoration work, a never ending job. 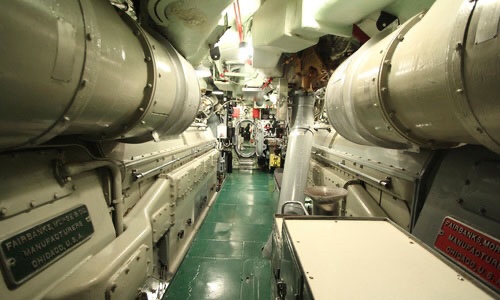 The sub had four huge Fairbanks Morse diesel engines that powered generators to charge batteries and drive electric motors to turn the propellors. The forward and aft engine rooms were the biggest spaces in the sub. 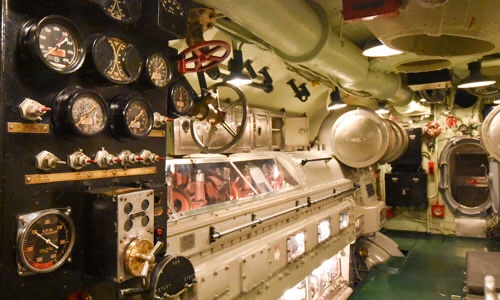 Almost as big were the forward and aft torpedo rooms. There were 10 total loaded torpedo tubes and 14 spare torpedos for reloads. 24 total.

Every other space for every function was small and crowded, most had multiple functions. Knobs, dials, pipes, valves were everywhere. Lots of training for the crew to know what everything does.

We have a young friend in the US Navy Submarine service today. He said the submarine school was the hardest school he ever went to. He said one of the hard parts was that everyone needed to know how to do almost every job.

I crawled out of the small sub space back into the sun. We had enough of climbing up and down ladders in tight spaces. Coming back would be worth it for a closer look. Maybe next time.