Mardi Gras is a season. It starts each year on January 6 and runs through Fat Tuesday the day before Ash Wednesday, the first day of Lent. That means the length of the season is different each year. The big events of the season are the Mardi Gras parades which happen during the season culminating with the biggest parade on Fat Tuesday.

I don’t know much about it so I am paraphrasing a bit here.

Mardi Gras is French for “Fat Tuesday“, reflecting the practice of the last night of eating rich, fatty foods before the ritual fasting of the penitential Lenten season.

The first U.S. Mardi Gras occurred in Mobile in 1703 with a secret society, the Masque de Mobile, formed to organize the celebrations. This society is similar to the “krewes” in New Orleans who sponsor the elaborate floats used in the parades before and during Mardi Gras. The celebration arrived in New Orleans soon after its founding in 1718.

About a century later street parades had become established in many cities in Louisiana and Alabama and many krewes had formed, their members remaining anonymous and their faces hidden by masks. In 1872, a “King of Carnival,” Rex, was introduced to preside over the parades. The tradition of float riders throwing trinkets to the crowds also began in the 1870s. Typical “throws” include beads, cups, coins and stuffed animals.

Well all of that and Moon Pies.

All of this sounds like the St Paul Winter Carnival except there it is cold and in the winter.

Orange Beach and Gulf Shores had several parades in the days before Fat Tuesday but the really big one was at 10 AM in Gulf Shores.

We headed for breakfast about 8:15 at the Sunliner Diner. We got right in and had an unremarkable breakfast. Service was slow and inattentive. In just about every way imaginable a blah breakfast.

I suppose they hoped the decor would make up for it. Ya it was pretty 50s like right down to the black and white tile floors. Trouble was most of the folks coming here found the floors really slippery so they had long black runners everywhere people walked.

There was even a cut up Chevy or some other old car with a table in the middle.

We ate, drank poor coffee, paid the bill and left as long lines had formed to have the same experience.

The Mardi Gras Parade route was right down the street in front of us. There were barriers on either side of the center two lanes to keeper the “catchers” from getting too close to the “throwers”. There were some chairs but this is mostly a stand up event. Folks had those two wheel grocery cart bags for all of the expected booty.

At 10AM we could hear sirens and drums and music at the far end of the route but it took 45 minutes to get to where we were. We were right at the barriers, not really very crowded on our side but 2-3 people deep on the other side. 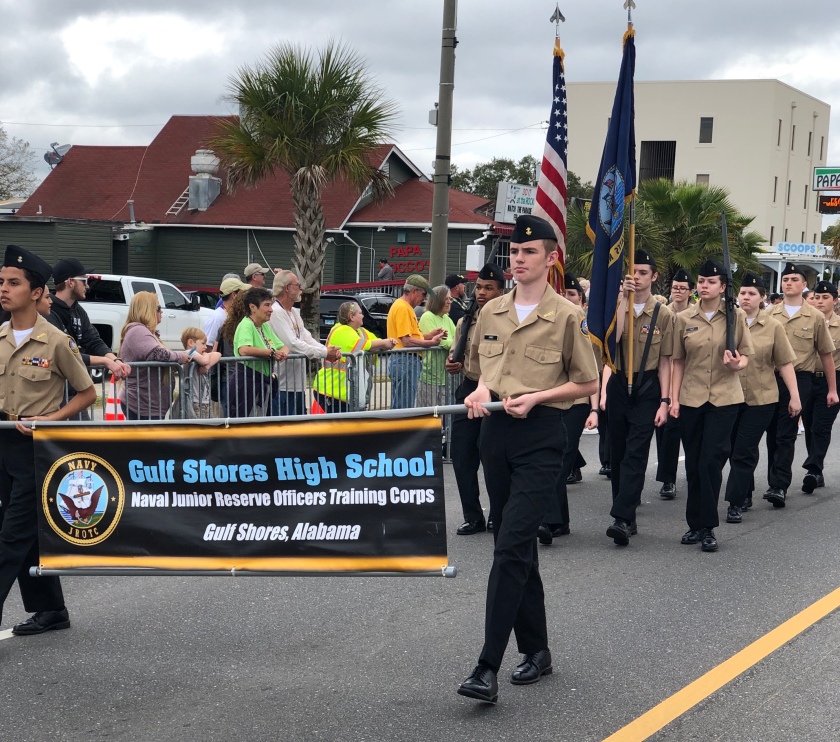 The police cars went by first to make sure everyone was behind the barriers followed by the Gulf Shores HS Naval Jr ROTC. 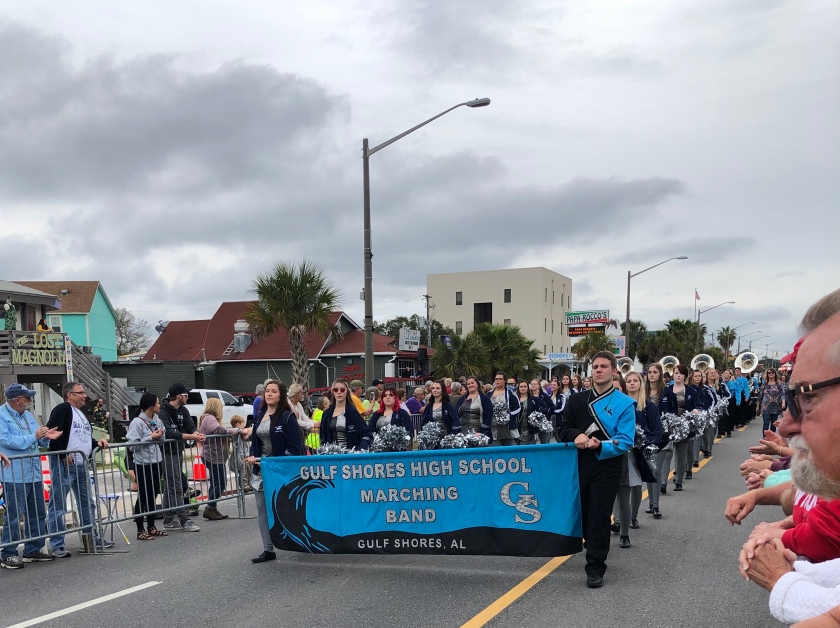 And of course a rousing marching band. 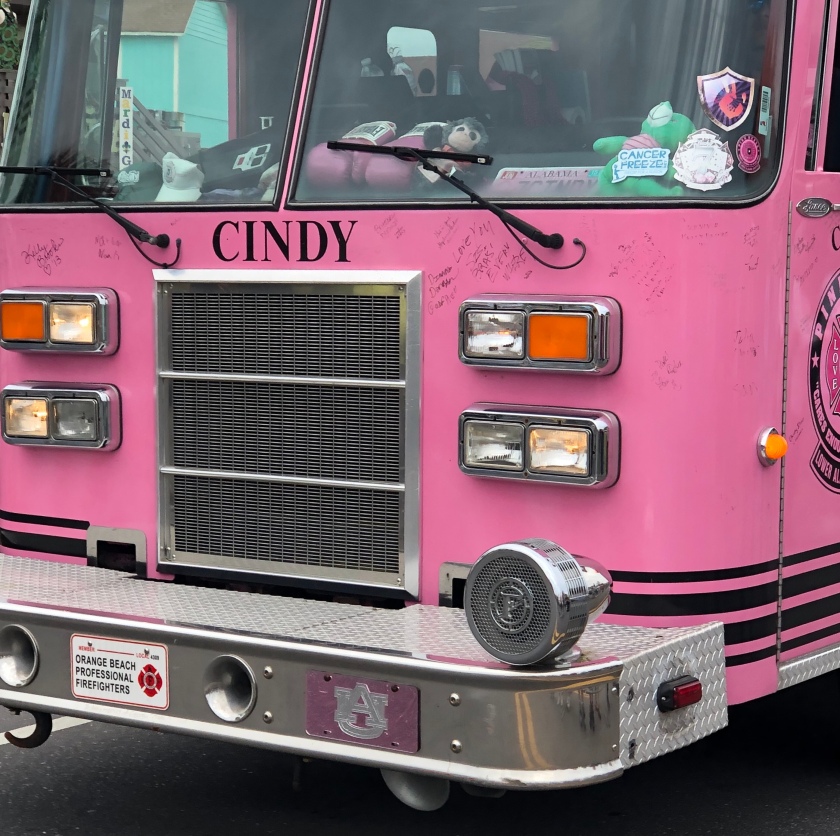 And Cindy the Pink Fire Truck.

And floats of every description, some two stories tall so that there was room for more throwers.

Susan was ready for bling.

Between the two of us we got quite a bit. It seemed that if you made eye contact with a thrower you were quite likely to get some trinkets. We got a rubber duck, a plastic cup, maybe a dozen moon pies and maybe 50 strands of shiny beads.

Most of the beads went into a plastic bag to bring home. They had a distinct plastic smell. The duck is on the dash of the Jeep.

The moon pies … well there are many forms of soggy cookies making a sandwich with marshmallow filling in a variety of packaging. Some have a powdered sugar coating, most something else undefined. They may be a treat somewhere but one bite and the rest went into the trash.

All in all it was great fun. After the parade there was a tremendous traffic jam that added about 10 minutes to our trip back to the campground. Kind of nice being in a smaller town for all of this.

A few weeks later we were in New Orleans where they had 53 Mardi Gras parades during the “season”.

And at the same time our friends Ted and Karen became grandparents.

We are very happy for them.