Our plan was to see Rudy and Carolyn, see Scott and Carol, see Keith and Jo, probably eat more than we should. Best laid plans, you know how that goes. We got the word the day before we left Bayou Segnette that there were new plans.

We never imagined Rudy and Carolyn would sell their Foretravel and buy another one. Rudy said Carolyn wanted to look so they went with Keith and Jo to see one near Galveston. It was a nice coach but not quite what Carolyn had in mind. They went to Motorhomes of Texas in Nacogdoches to look at more. They didn’t see anything that made the cut. So they went to see Chappell and Mary Elizabeth Jordan for dinner. Chappell reminded Rudy that Scott and Carol were selling their 2001 U320, 42 ft, 2 slide, tag axle coach. Rudy and Carolyn went to see it and bought it.

In the mean time I had been carrying on a running conversation with Keith about his 2000 40ft U320 single slide and some of the upgrades he was considering, solar, batteries … all the fun stuff. Keith had gone with Rudy and Carolyn to see the coach near Galveston. A 2003 40ft U320 tag axle, 2 slides.

Next thing I hear is Keith and Jo bought that one.

All of this happened in the week we were in New Orleans, we started to hear about all of it the day before we left. We got to Baytown on Sunday.

The next morning on Monday we went with Rudy and Carolyn to see Carol and Scott to finish the deal and pick up the coach. Rudy and I drove the coach to a friend of Rudy’s that has a grass farm. At the grass farm there is a pit to drive the coach over to work on the underneath parts.

Their new coach, Carolyn checking on the kitchen, Rudy already on the phone and driving away from Scott and Carol.

Rudy wanted to get the oil and filters changed, the chassis lubed, the brakes checked. While underneath Rudy and Richard, the guy that was helping out, discovered a minor leak in the rear transmission seal. And the alternator was seized up. And the drive pulley for the alternator needed replacing.

Rudy got back with the new alternator, that went in pretty easy, put on the new belt and adjusted the belt tension. The oil filter got installed, 36 quarts of oil added. The rear transmission seal got removed so that Rudy could take it with to make sure he got the right one.

Somewhere in here we all got cleaned up and went to Monument Inn for dinner. This is a great seafood place that we try to go to when we are visiting Houston. We had battered, fried stuffed Jalapeños for an appetizer. I have never had them and they were quite tasty.

Thursday another fellow who had done these transmission seal replacements before helped Richard get that done. Then Rudy and I got the coach back over to a place near Rudy’s.

Susan and I were going to have lunch with Carol and Scott on Friday. By this time the corona virus was roaring about and Scott was concerned about exposure. He has immune system issues so they suggested we call off lunch. We were really disappointed. They were disappointed. Seeing them was a primary reason for stopping in Houston.

So instead we went over to where the new coach was. Rudy and Carolyn brought over their current coach and had enlisted some help to swap mattresses from one coach to the other. There was an issue with the compressor that supplies air to deflate and inflate the slide bladder seals. It was not putting out any air.

Foretravel slides have an air bladder that goes around the slide to make it waterproof when it is in or out. It is sort of like a bicycle tire inner tube. When you want to move the slide in or out you need to deflate and retract the seal so that it doesn’t rub on the slide when it moves.

With no air to deflate the bladders Rudy wanted to put in a couple vacuum pumps to make them delate. Off we went to the hardware store. In Houston, going to the corner hardware store always seems like it takes 45 minutes. And it did, each way, and at least that long looking for parts that they didn’t have or have enough of. We got just enough parts to connect a new vacuum pump to deflate the bladders. This is a pretty slick way to to it, quick and efficient and it doesn’t depend on having compressed air. But you still have to have compressed air to reinflate the seals. Rudy ordered a rebuild kit for the compressor and then later found a spare compressor in Scott’s spare parts bin. The spare compressor seems to work fine.

Rudy and Carolyn are moving into their new house. It is like any time you move. Some surprises, things to figure out, where is this and that going to go. It takes some time but we think it will be a nice change for them, more room, slides, an AquaHot for heat and water, more AC capacity. As soon as they are ready their older coach will go on the market and find a new home.

Saturday we all drove down to see Keith and Jo and their new coach. It is the same sort of event for them as for Rudy and Carolyn, they are not full timers but it’s a whole new coach. Even though it was only three years newer it is a big change.

Of course we went out for lunch. 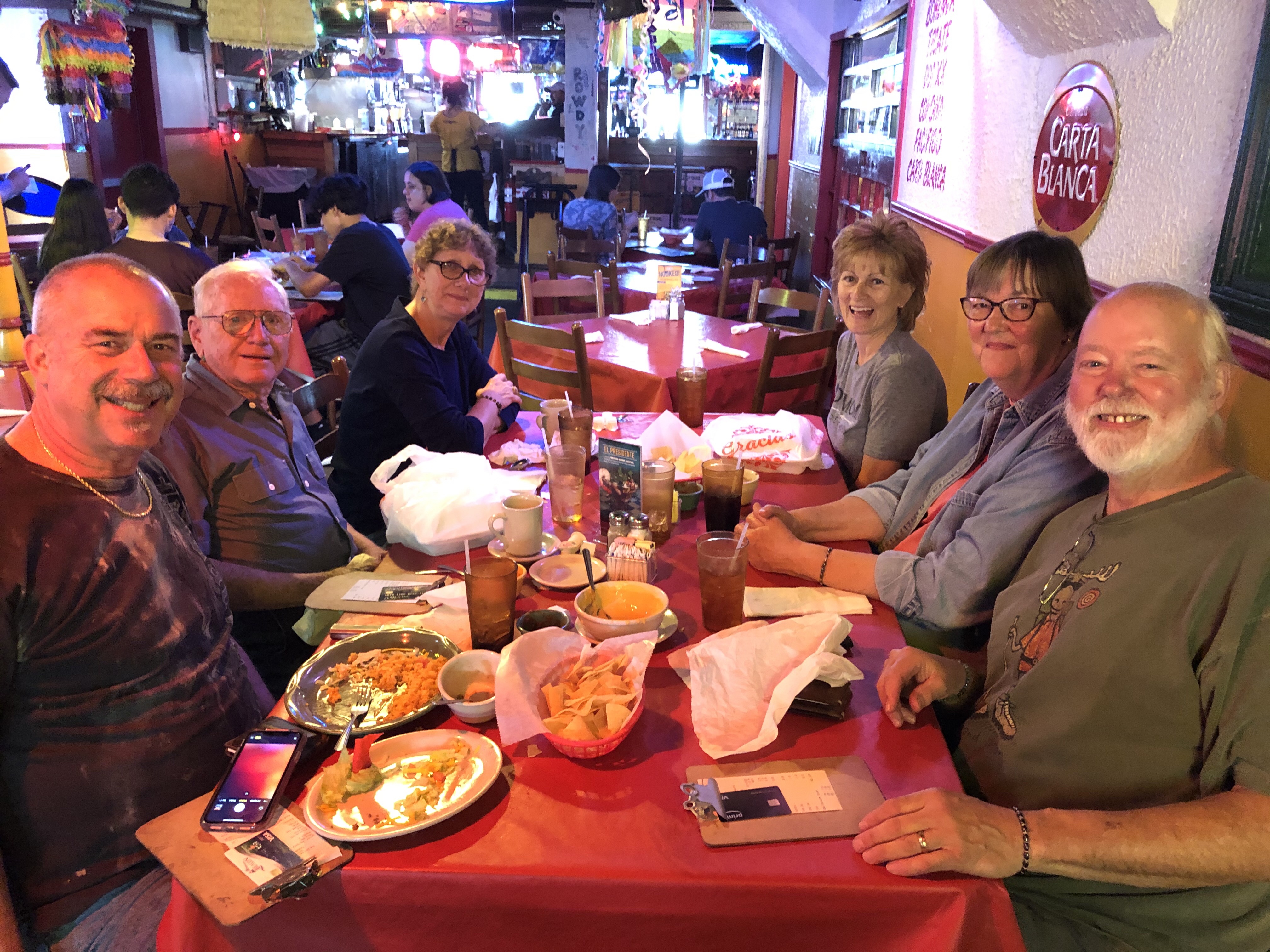 We are excited for Rudy and Carolyn and Keith and Jo. New coaches, new things to learn, new experiences. Good for all we think.

It made for a busy week. By Sunday we needed to leave, heading for Fredericksburg, TX about 5 hours away. We were expecting to see several friends there but the corona virus epidemic was getting worse. We would just have to wait for a few days to see what would happen.