It is a long way across Colorado and Nebraska.  After about 400 miles we stopped at Windmills State Recreation Area just east of Kearney. It is close to the interstate and has 6 small stocked fishing lakes and a collection of old windmills. 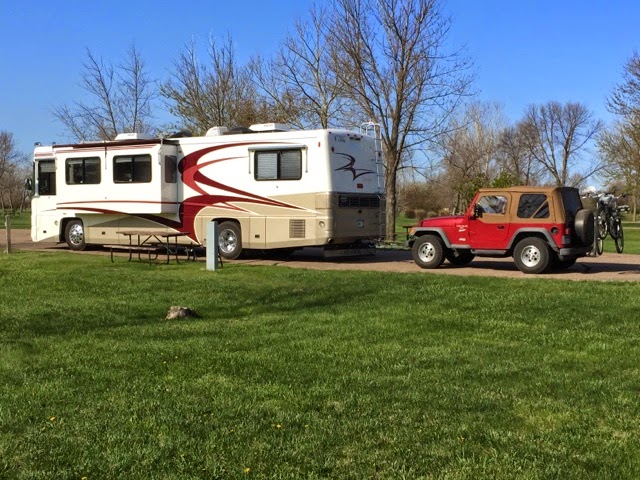 The grass was green.  Someone was mowing, it smelled nice.  The park was almost empty.  Good to stop and get out for  a walk.

When I got back I was looking at the ForeForum, a website for owners and people interested in Foretravels.  There had developed during the day a big discussion about making/modifying cup holders. I solved this a while ago so I posted a picture on my insulated, adjustable, non-moving cup holder. I like what works. 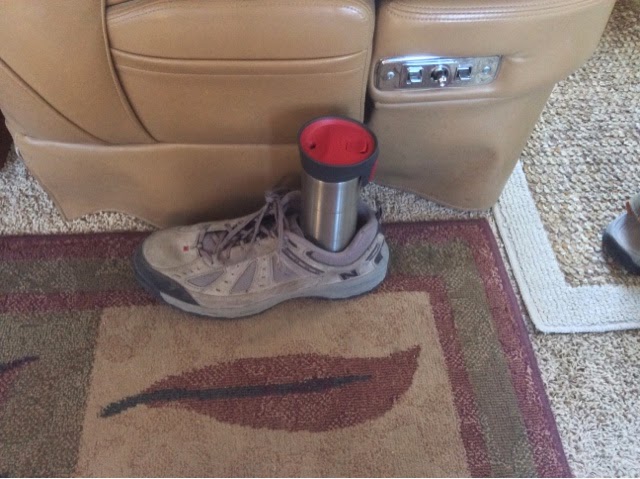 The next morning we got up and headed off for a 370 mile day to an Army Corp of Engineering Campground east of Des Moines.
We stopped at Saylorville Lake, Cherry Glen COE Campground.  $10/night. 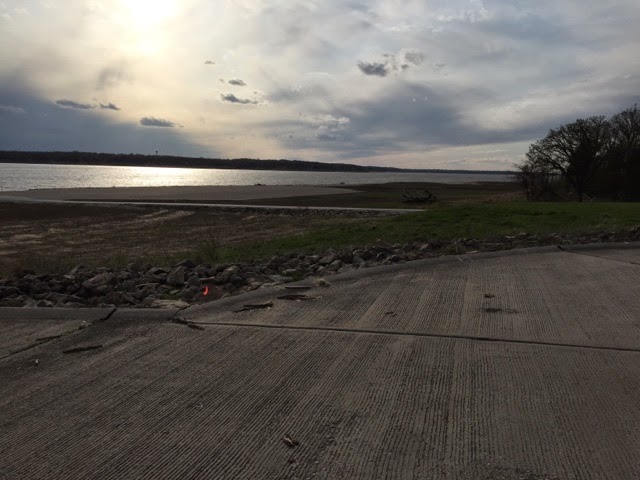 A very large lake made by two dams. 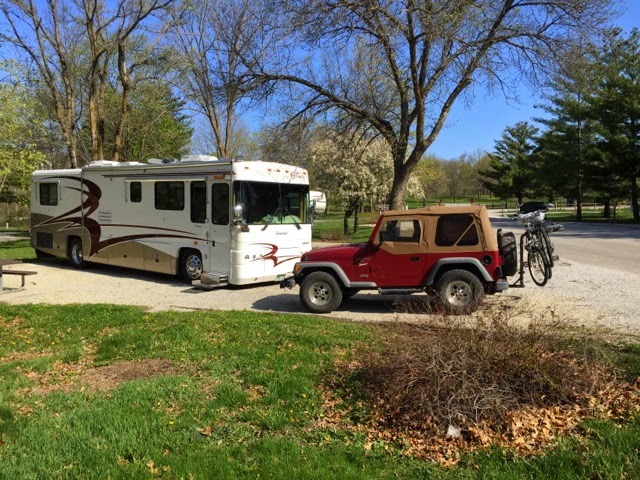 And a nice campsite.  It was very windy for both of the past two days.  Mostly from the northwest which gave us a bit of a tail wind.

Our last leg on this run to HWH Corporation in Moscow, IA was less than three hours.  HWH has hookups so we were going to get there, plug in and head for the Tipton Family Restaurant in Tipton, IA.  The food is good, the portions suitable for burley farm boys and the prices good for their miserly father.  It was indeed, good and I brought home half of my lunch.  We drove around tipton, the county seat to look at houses.  There were some beautiful Queen Annes, some Victorians, lots of four squares and several attractive bungalows.  It has a big couthouse and a grand library.  A pretty nice town.
We stopped for fuel acress from HWH, $2.49/gal for diesel.  We bought fuel near Denver so this was about 700 miles heading east.  The tail wind helps.  We averaged 11.25 mpg on that stretch.  Very nice.
There were about 8 other coaches there at HWH from all over for service.  Another Foretravel pulled in and the fellow knew who I was from the Forum.  He was from British Columbia, a full timer and working his way back that way.
Our stop at HWH was to check for leaks.  They drive the coach around to the side of the building and on to an elevated structure so that it is easy to get underneath. 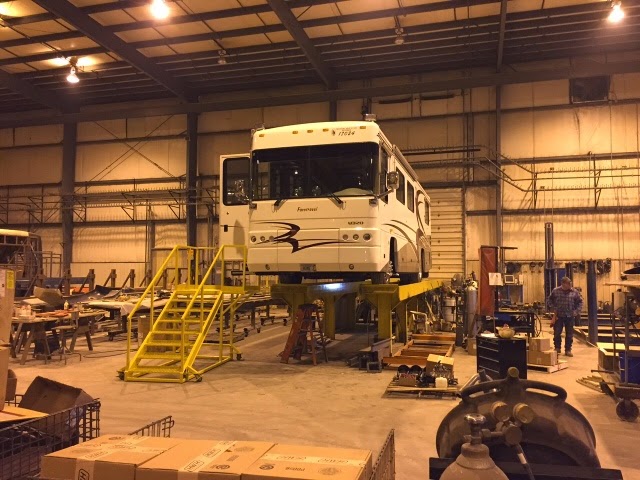 They must have 24′ ceilings or more.  Something like this at home would be nice.  Another Foretravel owner in Australia built something like this only the legs were on pivots so that it folded almost flat.  He would drive on it and then hydraulic pivots would push it up into a raised position.  I think I would rather have something solid.  Another fellow in BC built a drive over pit.  It is some work to crawl under these to work on them.

Anyway they found six leaks. One was on their equipment so they fixed that and marked all of the others with wire ties for me to fix.  There are dozens of air connections so after 15 years to only find six minor leaks is good.  And all of those that need fixing are pretty easy to get at.  Something to keep me busy.
So on towards Hastings.  Our friend Kathy has been checking the house, collecting mail, watering plants and ready for us to be home.  We are ready to be home too, although it feels almost like just the next stop for us where we will be for a while and then elsewhere.
Last year when we got back at the end of April we were disoriented for a while, so much more space.  We couldn’t find each other.