We left Jim Hogg and headed for Fredericksburg, TX. We had reservations at the Fredericksburg RV Park which is just a few blocks from downtown. Fredericksburg is sort of at the western end of the Hill Country and is in the heart of the German community in TX. Lots of Germans came to this part of Texas looking for land and a new life. That heritage is evident on place names, restaurants and just about everything else.

When we got there Mike and Jackie, Bill Blackmon, Dave Cobb and Ted and Karen were already there. They are all Foretravelers. And Norm and Shirl too, who sold their FT to Dave C. They bought a fifth wheel that they live in for the winter in the RV park and store it nearby for the summer when they go home to Colorado. Everyone was on different schedules but we managed to do something with someone nearly every day.

We went to Opa’s Smoked meats to get some German Sausage and treats. We ate at Nury’s, Wheelers, Whataburger, Cranky Franks, Porky’s Hamburgers and Onion Rings, the Airport Diner and a couple other spots in town. Sort of an eclectic mix, mostly for lunch and all pretty good. Maybe not all German food but we did have our fair share of German potato salad, red cabbage, Dusseldorf Sausage and other good stuff.

The RV park is well laid out with lots of trees. 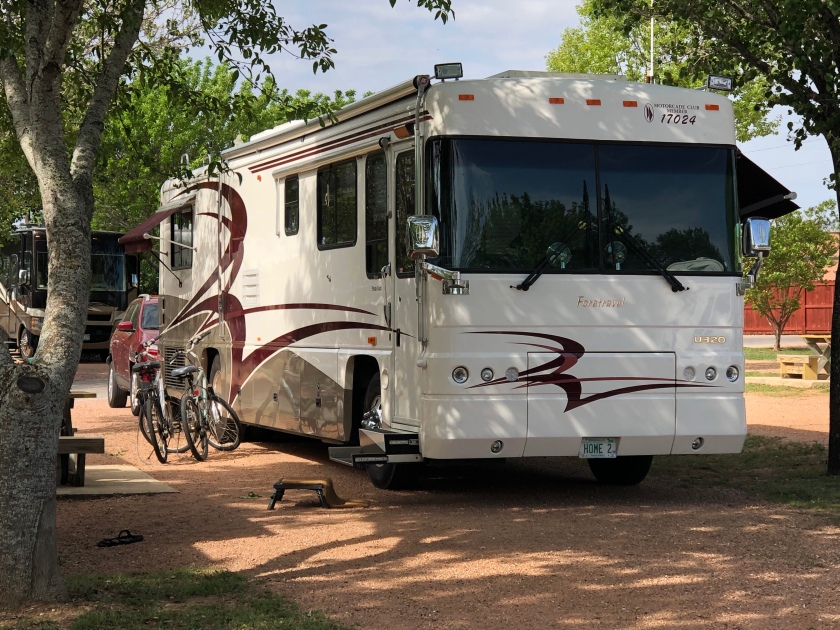 We walked or rode bikes around the campground almost every day. 1-3/4 mile around once. I tried to walk the whole thing twice most days. I got up to four times one day on my bike. That is about 7 miles. There weren’t any designated bike paths in town so we didn’t get out much on the streets. Bill Blackmon is a bike rider too and he got a bike route map that both of us agreed was not what we wanted to do. Mostly along back highways with little or no shoulders just didn’t seem the way to go.

The campground had a very nice laundry and rec room building. We got together there several evening to play Uno or Quiddler (card games) or just to share a desert and conversation.

Mike and Jackie and Susan.

Jackie figured it out after just one hand. Get rid of the high point cards.

Ted (in the hat) played one evening too. The practice round went on for more than two hours and he Uno’d out first.

There were lots of different camping things in the park.

A 13 ft Casita trailer. Quite compact.

Made by the Spartan Aircraft Company.

And lots of interesting tags. 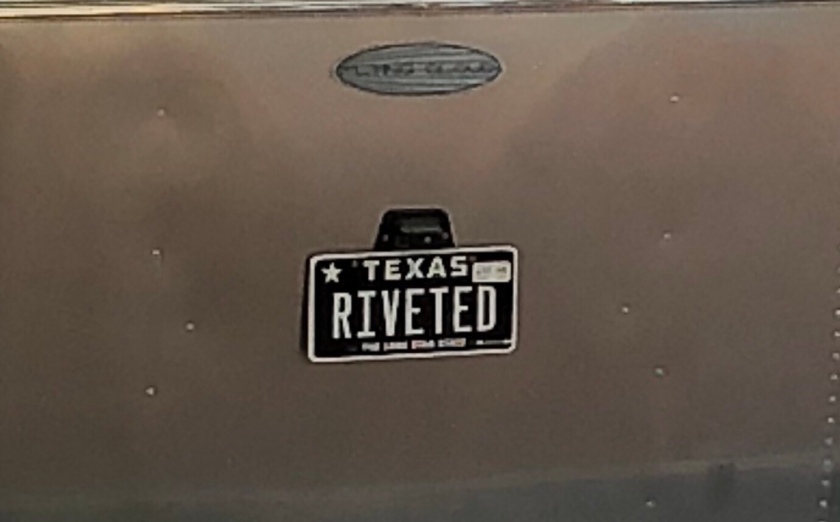 On the back of an Airstream.

And quiet places to sit in the evening.

Complete with fish, alligators, a water feature and ducks.

OK, this is long enough. But the story is not over.