We have two battery banks. The three 8D Lifeline batteries that are more than 8 years old. The second bank is four Full River L16 6 volt batteries now just two years old. Between the two banks we have about 1500 amp hrs of capacity (lots). These batteries weigh about 1,000 lbs.

Ted and Karen Come for a Visit. Power to the People!

Our good friends Ted and Karen came for a visit in August. They are full-timers, have been here before and it is always fun to see them. This was all connected to the batteries.

My three Lifelines batteries are near the end of their useful life for the demands of the coach. I have been thinking about the newer technology of lithium batteries. LiFePO4 (Lithium Iron Phosphate) to be exact. Lithium batteries need some extra care compared to lead batteries so either an external battery management system is needed or as some are now equipped, an internal one. Charging is also different, they need a bit more control as the time at the different charging stage is different. The advantage is that a 100 amp hr battery has 100% usable power compared to a lead battery where they are limited to about 25% to maximize battery life. And a 100 amp hr lithium battery weighs 29 lbs compared to the 167 lbs each for the Lifelines.

In exploring this option I though if someone wanted to buy my almost new Full River L16s that would help offset the extra cost of the Lithiums. I checked in with some friends and Ted called back. His batteries were about due for replacement too and the 4 L16s gave him 60% more capacity. We came to a beneficial agreement and they headed our way from Indiana. 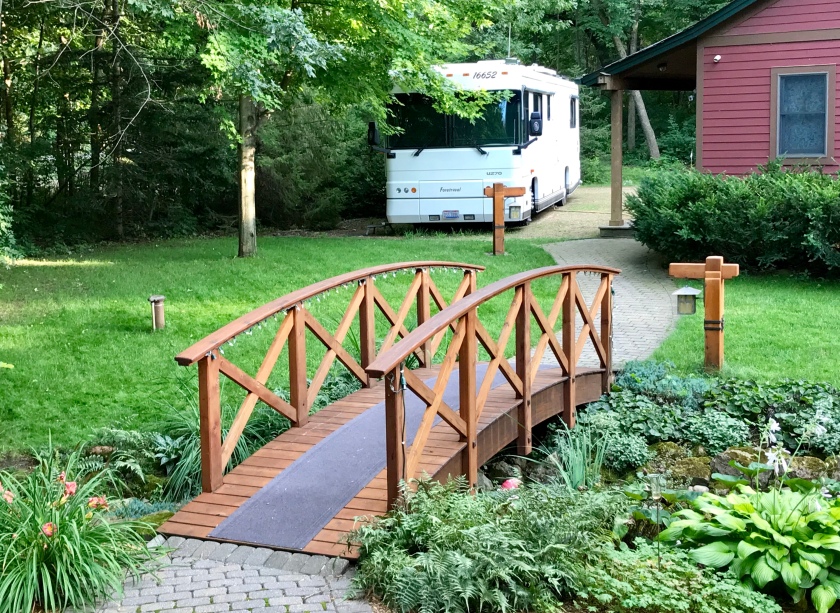 Ted and Karen at Camp Hastings. The grass on the left is starting to look thinner.

Before they got here I had my L16 batteries out and ready to go. I was not sure of the actual size of the battery bay in their coach so when they arrived we measured and made a new battery rack. 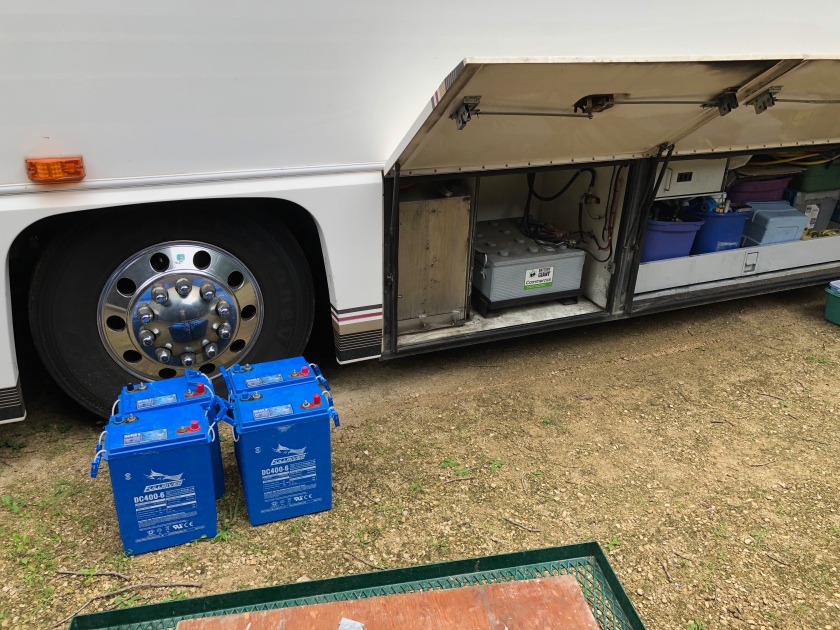 The new batteries were ready to go. Out with the old, in with the new. 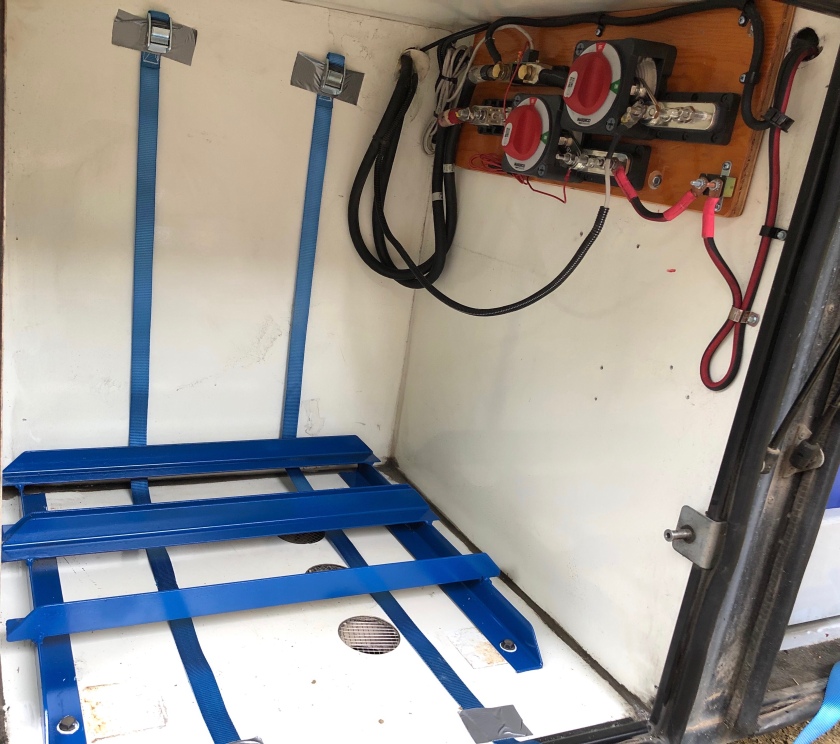 The new battery rack was painted blue to match the batteries. We also added new disconnect switches, bus bars, a shunt to measure current flow and new connections for their solar panels. 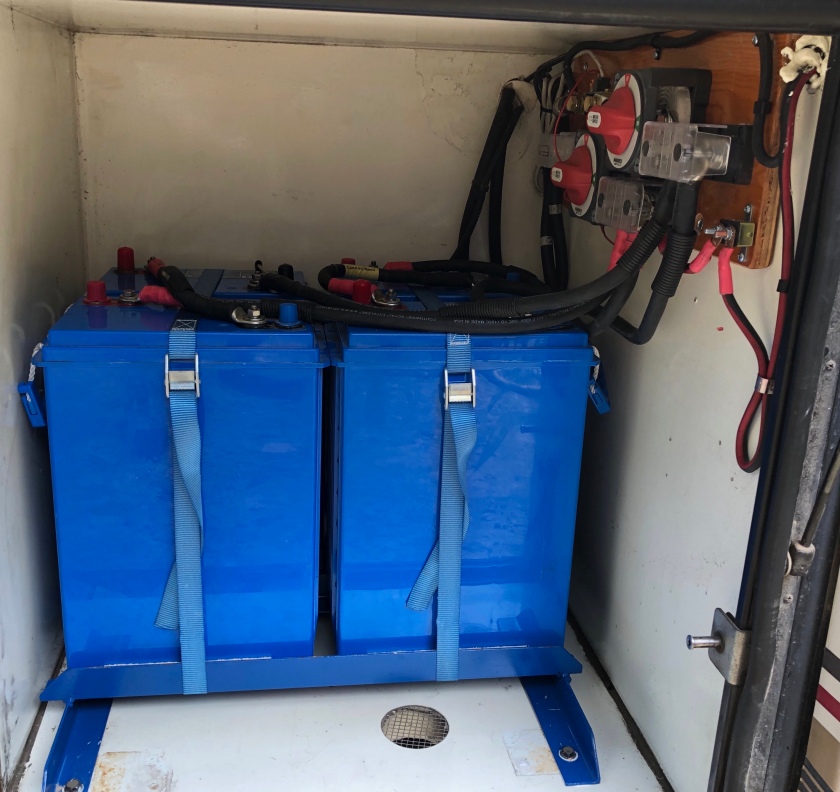 We loaded in the four L16s, a perfect fit. Each battery is connected to the bus bars. These batteries take up only 2/3 of the floor space of the 2 8D sized batteries that came out of their coach. 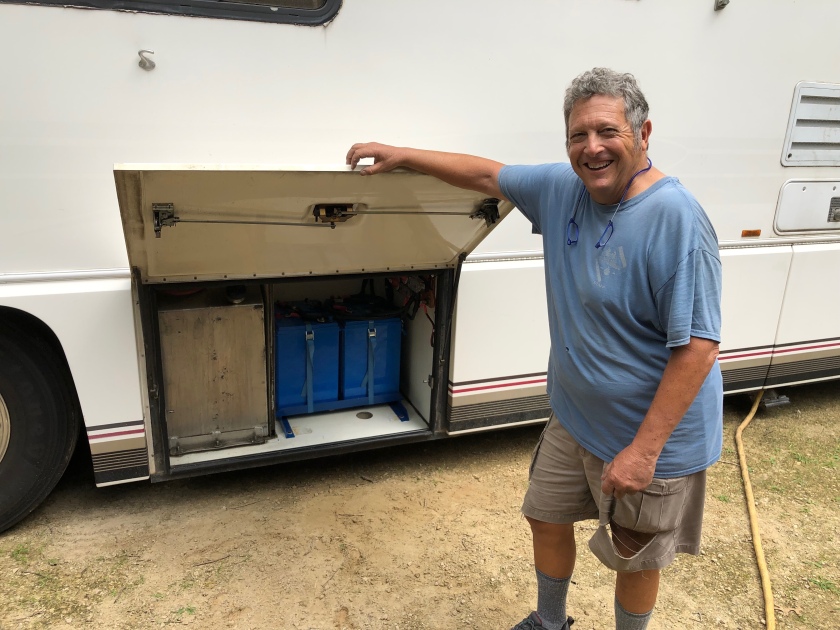 Ted was pleased. He left his old batteries with me. I have a purpose for them. More on that later.

They were here for about a week. We made plans to meet up with them later in September in the Black Hills for a Foretravel Motorcade Club Central Plains Chapter rally.

I was glad to help them out with this for their coach. It helped me decide to make the change to Lithium. And now that 1/2 of my batteries were gone I had to get busy.