After all of the busy work earlier this summer we had to go somewhere.

On the Way to Where the Buffalo Roam

It turned out that Jeff and Sandy from North Carolina were going too. We met them along the way at the Corp of Engineers Left Tailrace Campground on the Missouri River just west of Chamberlain, SD. The COE park is about 18 miles north of Interstate 90. It is a winding two lane road to the Missouri River and then a narrow road across the dam. Yikes! And then a tight right 180° turn to a road leading down the back side of the earth filled dam section to the campground.

Here is a different look at Jeff and Sandy’s GrandVilla. Very nice for a 26 year old coach.

We were just down the road from Jeff and Sandy. There was plenty of time to go for a walk around the campground, over by the river and the boat launch.

This is a really nice campground, we have stayed here before. The main part of the Big Bend Dam is for electric power generation. The outflow from the generators comes down the left tailrace. The overflow and water released from the lake level control gates comes down the other side of the campground in the right tailrace. 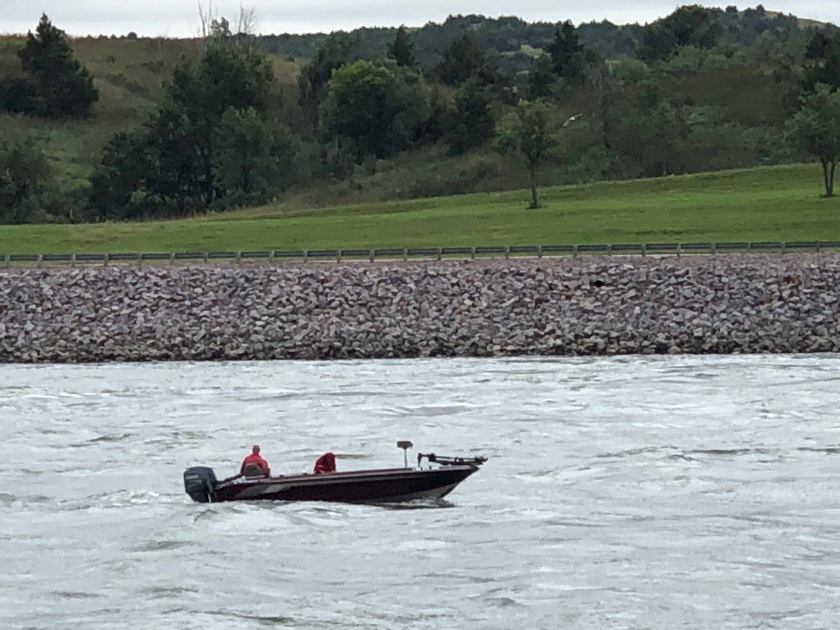 The main reason most come here is for the fishing. Walleye fishing is supposed to be very good.

Just below the dam there were dozens of black tipped pelicans also fishing. They would work together in groups of three or four. It appeared that they were herding the fish in front of them and then they would all dive in at the same time and come up with fish.

While walking around we spotted another Foretravel. Somehow it looked familiar. It didn’t look like any one was home so I took a card over to leave at their door. But they were there. It was Jaye and Pat Miller that we met when we were in Nacogdoches about five years ago getting our new front steps and headlights done at Xtreme Paint and Graphics. Their coach was there at the same time getting repaired after a right front tire blew out and they hit a guard rail. It turned out there was a lot more damage than it appeared at first. Their generator was damaged as well and even more. They ended up staying at Xtreme for almost three months. In the end it was all done and ready to keep going as were the Millers. They are in their 80s now and thinking maybe its time to stop fulltiming

Next stop was the Hart Ranch RV Resort just south of Rapid City. It was a big park with a store, gas and fuel station, a nice meeting room and very nice sites.