Most everyone we were thinking would be here in Fredericksburg during the time we were here decided not to come because of corona virus concerns. They each made the best choice for themselves. Everyone was disappointed.

Amanda and Douglas were coming for a week arriving a few days after we did. They checked with us, were we OK with them coming? We were so they arrived on Wednesday.

They had been in Port Aransas and then at the Rattlesnake Roundup in Sweetwater, TX.

No chance of corona virus there, right?

Keith and Jo had their weekend in Louisiana cancelled. Actually they were OK with that. They both had to be back to work on Monday and with the virus spreading rapidly in Louisiana they were worried about getting back into TX. Arrrgh! We were just in New Orleans. They called Fredericksburg RV Park and got a spot and arrived Thursday in their new-to-them 2003 Foretravel.

It was cool at the end of this week, jackets required. 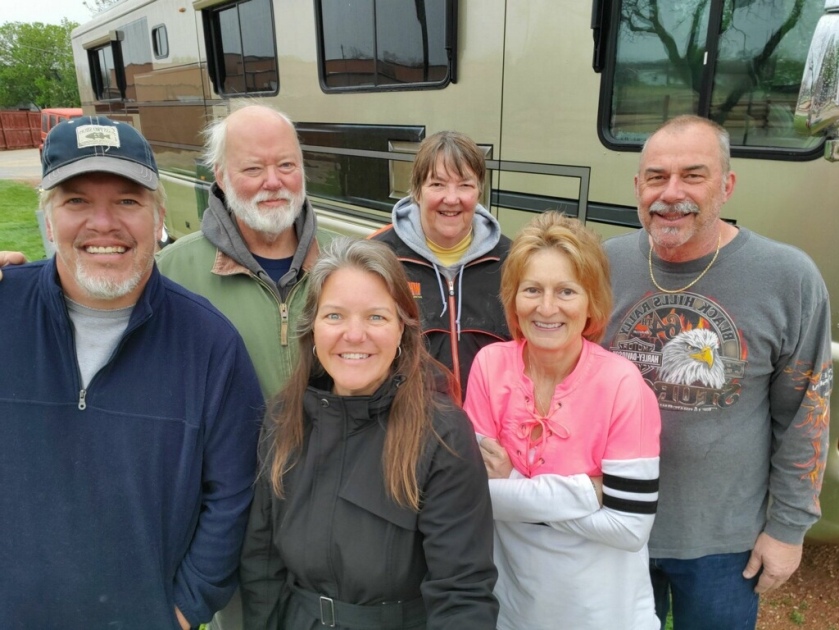 We walked around the park every morning. Spent a bunch of time over at Keith and Jo’s coach helping them figure out new stuff. Douglas figured out the basics of their TV connections to an external source. I spent some time with Keith looking at hinges and adjusting some door alignments and looking in the basement at things.

We got together in the evenings for some rousing games of Quiddler. Keith complained he never played card games and probably wouldn’t be too good at it. He won the first game we played. Jo was good at it too and I recruited her as another Words With Friends competitor. She brings a new bucket of medical words to the match. I enjoy the competition.

One evening I cooked walleye on the grill on a new silicone grill mat. Never tried it that way before but with the grill turned all the way up it fried up nicely. We had some Capt’n Kens baked beans in the freezer. Susan made some coleslaw. Jo brought corn on the cob. Amanda brought desert. We ate in the rec room because it was pretty cool outside. 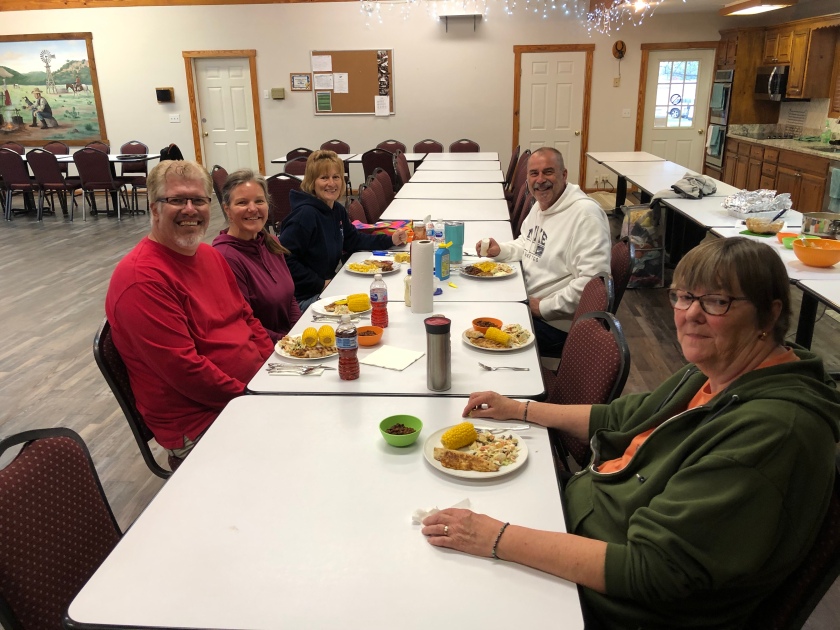 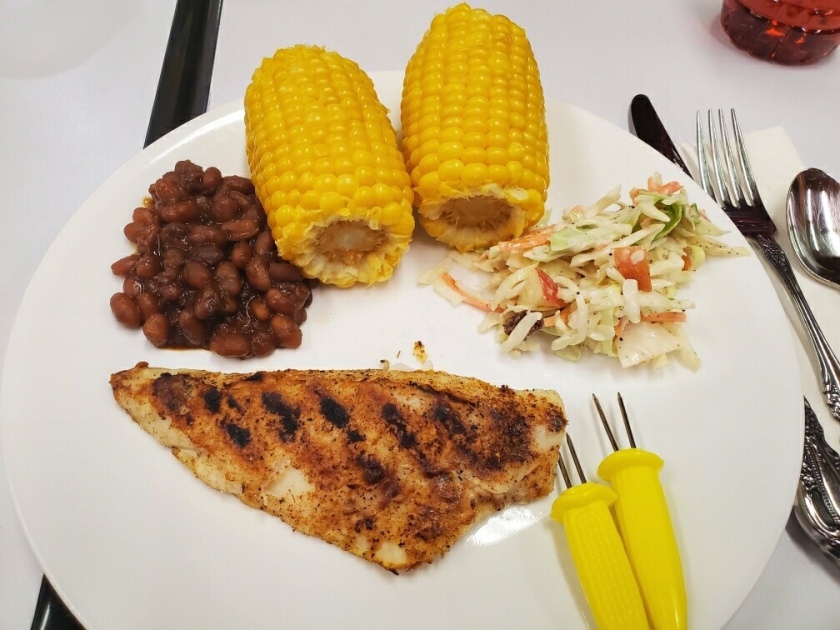 Pretty tasty. We found some Blue Bell ice cream in one of the freezers, washed and reused the small bowls to have some with the cookies Amanda made.

Another day Susan and I made an apple pie with apples we brought from home. We have peeled and sliced them last fall and frozen them so we could make pies in Fredericksburg. We had plenty so, a pie for desert while we played Uno. 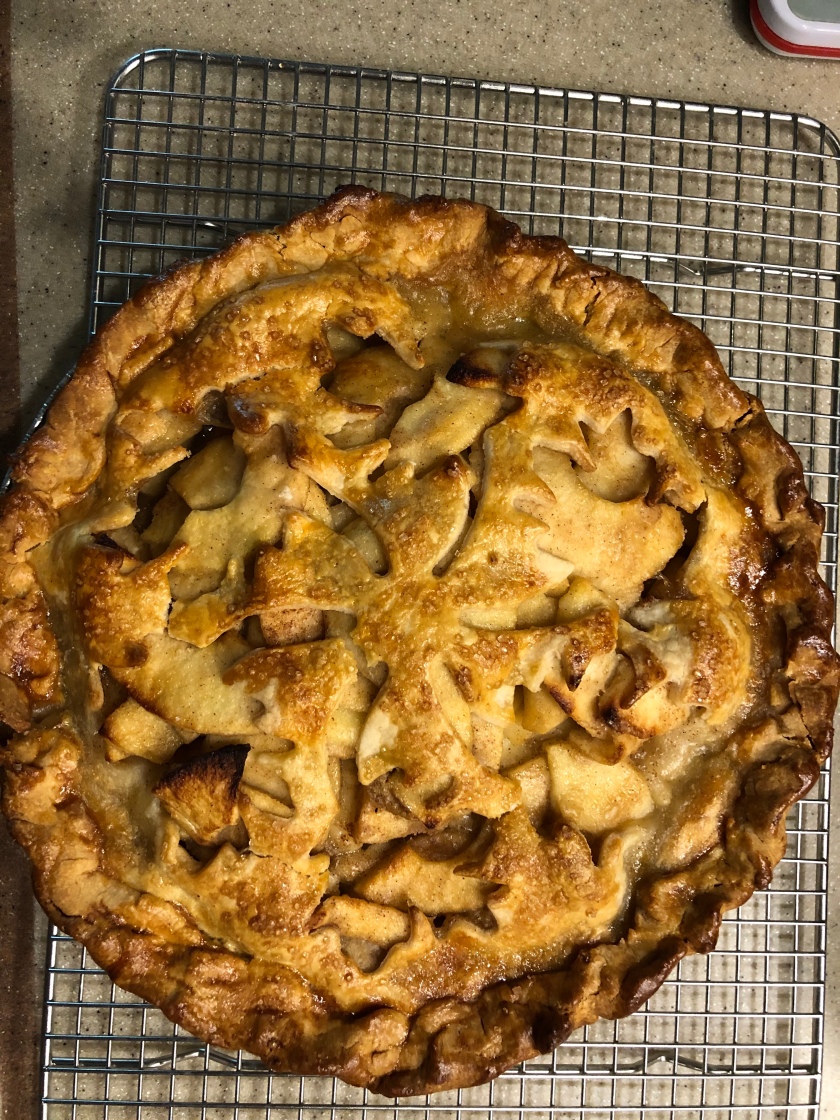 We ate the rest of the ice cream too. I think Keith won the first Uno game too.

It was nice to have Keith and Jo come for a visit. I am sure we will see them again.

Amanda went to the grocery store and came back with another tub of ice cream and put it in the rec room freezer. Later that afternoon in response to the Texas recommendations for corona virus response the park closed the rec room. We had to enlist the help of a maintenance guy to rescue the ice cream.

The next few days were much warmer. Douglas and Amanda were scrambling to figure out what was next for them and where they were going to go. Several of their upcoming craft shows were canceled or postponed. Some of their campground reservations were canceled too. It took a few days but they rearranged enough to have an idea what was going to happen for awhile. 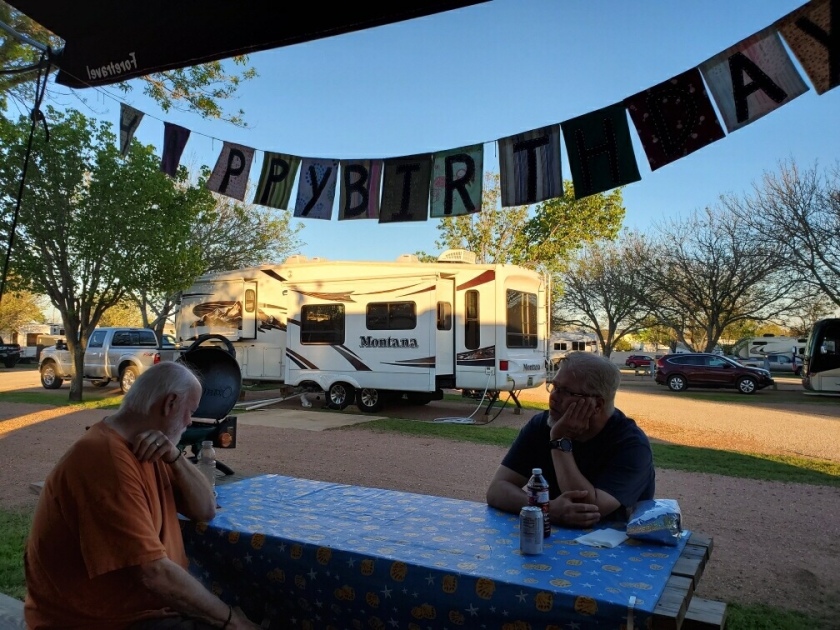 We had baby back ribs in the freezer, more for a shared supper. Roasted corn, mashed potatoes, salad. Another wonderful supper.

And Susan made a carrot cake, two layers. I had to slather on the frosting. 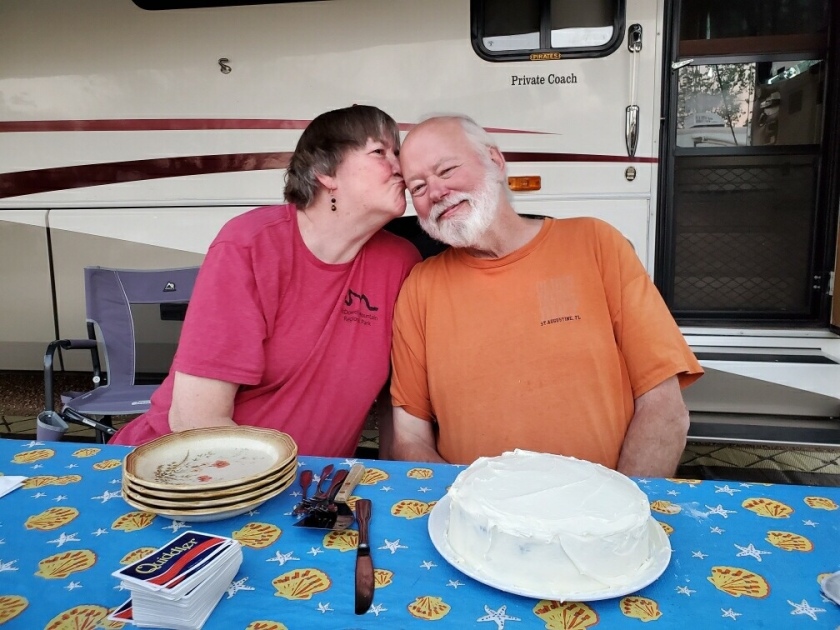 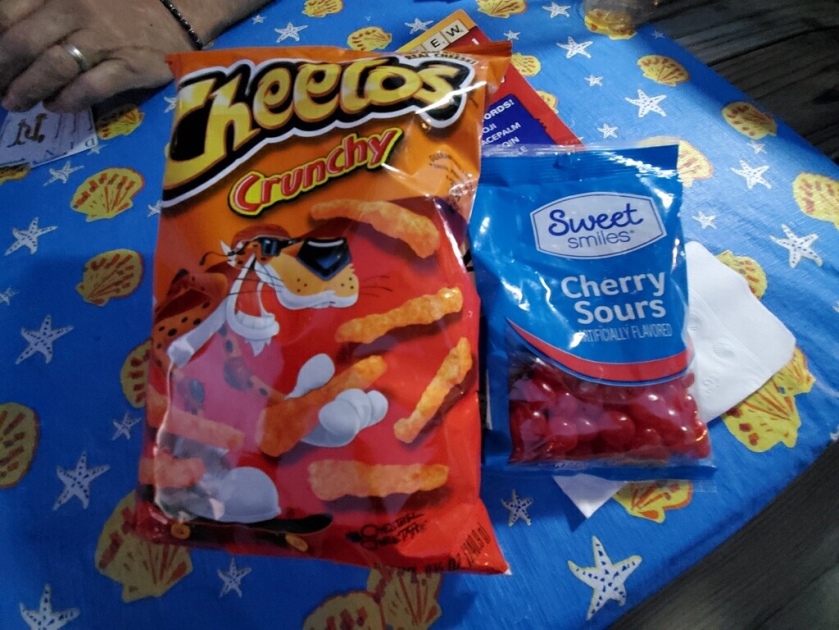 The best worst snacks too … we managed to make them last for a week.

And more quiddler made it a pretty nice birthday celebration with great friends. 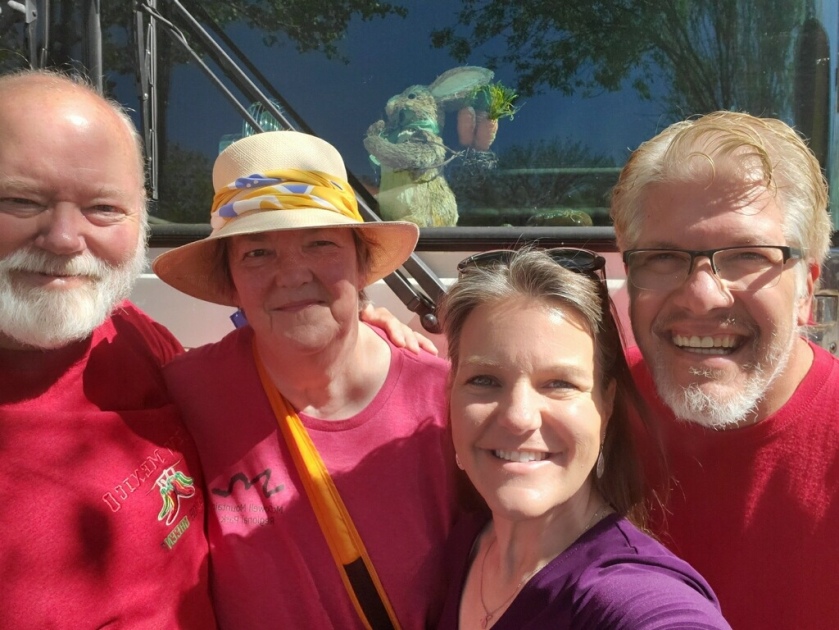